Injury Epidemiology is a scientific journal that is, in their own words, “advancing the scientific foundation for injury prevention and control through timely publication and dissemination of peer-reviewed research“. Their stated aim is to be the “premier venue for communicating epidemiologic studies of unintentional and intentional injuries, including, but not limited to, morbidity and mortality from motor vehicle crashes, drug overdose/poisoning, falls, drowning, fires/burns, iatrogenic injury, suicide, homicide, assaults, and abuse“.

I am unsure where in the purview of Injury Epidemiology the paper titled “Death is certain, the time is not”: mortality and survival in Game of Thrones happens to fall. Published today, the paper written by authors Reidar Lystad and Benjamin Brown is a statistical analysis of which characters die in (you guessed it) Game of Thrones and how long it takes them to do so. From the ‘background’ section of the paper:

The primary aim of this study was therefore to examine the mortality and survival of the characters in Game of Thrones. Specifically, to estimate survival time and probability, to identify predictive factors, and to describe causes and circumstances of deaths. The secondary aim was to give the authors an excuse to re-watch the first seven seasons before the final season reaches television screens worldwide.

Listing their data sources as the DVD box sets, IMDb, and the Game of Thrones Wiki, the authors catalogued significant characters in the film by their sex, social status, occupation, religious affiliation, and allegiance, in addition to which faction they belonged to, whether or not they remained loyal to that faction, and also how prominent in the series they are. Their prominence was determined as thus:

From this, the survival time of characters was measured in running time (excluding the credits) from when the character first appeared onscreen to their exit, whichever form that took.

Those deaths were then broken down into individual diagnoses of the causes, which were then collated together. For instance: 7% of killed characters were decapitated, 4.8% were poisoned, 11.3% died from chest wounds, and two people were killed by “Traumatic amputations involving multiple body regions“.

The majority (47.8%) were killed outdoors, with 39.8% killed indoors, and the remaining 12.4% killed in some unspecified place.

As you would expect, the survival rate for characters on the show drops sharply from the moment they arrive onscreen: Analysis by group shows a few trends: Women overall have a better chance of surviving than men; characters who have switched allegiance survive better than those who haven’t; and more important characters are less likely to get killed off. 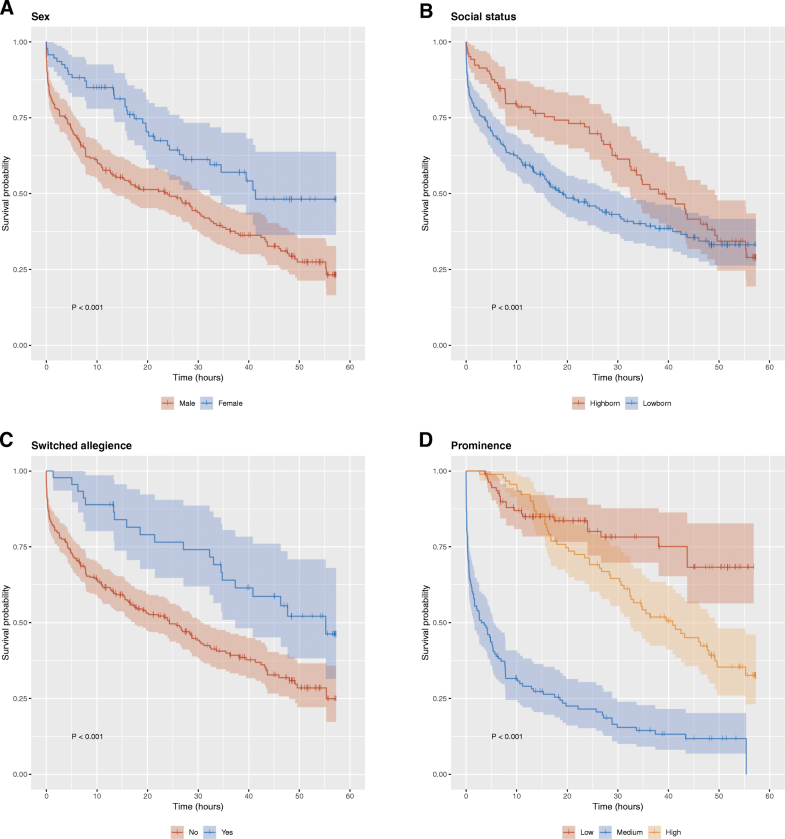 In conclusion, the authors make a number of recommendations for how these injuries could be addressed:

This is the first scientific study to examine the mortality and survival in Game of Thrones. It revealed that the probability of a character dying within the first hour after first being introduced on screen was about 14%. By the end of the seventh season, more than half of the important characters had died, with violent deaths being the most common by far. The probability of survival was worse for characters who were male or lowborn, who had not switched allegiance during the show, and who featured more prominently in the show. There is great potential for preventing violent deaths in the world of Game of Thrones. Stable democratic governments, resilient institutions that deliver public goods, and implementation of evidence-based violence prevention policies can decrease the risk of violent deaths considerably.

They also make a point to acknowledge that no funding was sought because “The original DVDs were already owned by the study authors.” and no ethics approval was sought because “Consent was not sought from participants because, whether dead or alive, their fictional nature would preclude them from providing valid informed consent.“

You can read the entire paper right here.