Fuck It: ‘Dune’ Is A Christmas Movie

Back in the misty, distant past before I had access to streaming or an internet connection capable of facilitating torrents, my main conduit to watching movies was Ten‘s Friday night movie. As a child, my conception of time was horrible, but it definitely seemed like there was a roster of movies that only rolled around once a year. There were a bunch I held out for every time, things along the lines of ET, The Dark Crystal, Stargate, Back to the Future Part II, Back to the Future Part III*, the Indiana Jones movies, and The Fifth Element.

Having only limited access to these movies gave them a weird sort of magical quality, one that was aided by the fact that I frequently fell asleep before the movie was finished and had only a vague idea of the plot. I couldn’t Google things about them, couldn’t watch clips on YouTube — my only knowledge of them came from these infrequent viewings that were punctuated by an unbelievable quantity of ads.

Sure, this is not an ideal way to watch things. Being able to watch whatever you want to watch whenever you want to watch it fucking rules, I think we can all agree on that. But to my mind there is definitely something nice about having a hard limit on how frequently you can watch something. I have the sort of personality where if I like something, I will consume it with a ridiculous frequency to the point that I ruin it for myself. I will play songs on loop, re-read books over and over, rewatch movies over and over, and cycle through the same TV shows on repeat until I have destroyed my own capacity to enjoy them.

The more you watch something, the more you see the cracks in it. While you might notice more things you like in repeat viewings, you’re also noticing the things that bother you more and becoming more bored by any dead weight. You start to notice the underlying structure, the intentionality behind how it is was made. Things that once seemed organic and novel become mundane and tedious. With the exception of genuine masterpieces (*cough* the movie Hot Rod *cough*), over a long enough timeline, continued scrutiny will only make your experience of things worse.

Watching certain movies yearly didn’t let me do this. It stopped me from ruining things for myself from over-exposure; it’s hard to get sick of a movie when there are large sections of it that you straight-up don’t remember. Re-watching them becomes a genuine joy when there’s something new you notice every time. As an attempt to recapture this, I have tried to bring this practice back into my life for a few movies, and for not all that good of a reason, I have chosen to centre it around Christmas.

For the last five years, I have done Christmas with a group of friends instead of doing the family thing. We do what is my perfect Christmas: cook and eat an enormous quantity of food, drink an enormous amount of booze, and lethargically sit on the couch until late at night, partially watching movies and partially drifting in and out of a potato-fuelled snooze. These movies are chosen from a constant-ish roster of movies that I reserve for this time of year.

There is no rhyme or reason to why most of the movies on this list have been reserved for Christmas. Some involve Christmas in some way, but the bulk of them do not. Here are the lists I wrote out on my phone in 2016 and 2017 in advance of Christmas, as examples: 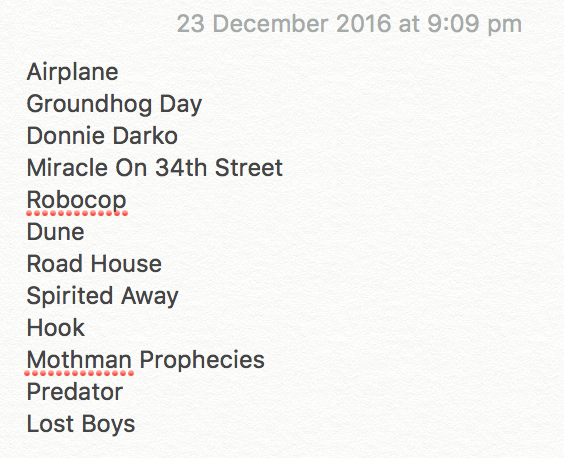 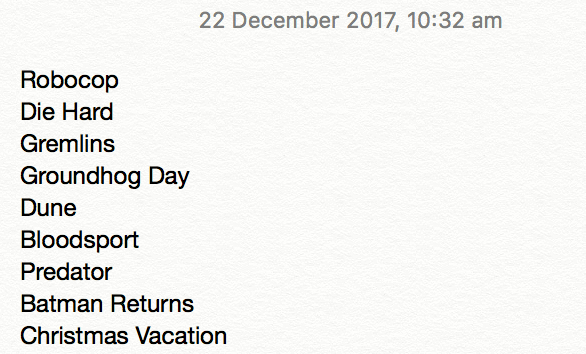 Only watching these once a year (look, sometimes I cheat), with the same group of friends, on the most magical goddamn night of the year, imbues them with their own magic, a tangible level of excitement I feel at the prospect of watching them again. In the lead up, I feel like — sorry for this — a kid at Christmas.

Does David Lynch‘s 1984 half-disaster-half-masterpiece Dune have anything to do with Christmas? Fuck no. Not at all. It would be difficult to mount any sort of argument that it does, and that argument would be flimsy at best and just wrong at worst. But saving it as a treat — one that I almost certainly will not stay awake for the entirety of — to be watched, in a haze of cheap beer and roughly improvised gravy, with a group of people that I love, makes it feel Christmas as hell.

People love to litigate what is and what isn’t a Christmas movie with some very complicated arguments, but I’m happy to do this with one metric: Do you watch it at Christmas? Congratulations, it is a Christmas movie.

Dune is a Christmas movie.

* They never seemed to do the first one from my recollection. This could be wrong.