Is Toadie From ‘Neighbours’ Cursed? An Investigation.

I’ve been watching Neighbours on-and-off for decades now. LITERAL decades – I was 10 when I first furtively flicked mum’s archaic TV over to Channel Ten while she was out in the lounge room watching video (!!) recordings of Days Of Our Lives. A lot has changed since those days, but one character has remained the same – Toadie Rebecchi.

Look there’s actually quite a lot of characters still around, like the Kennedys. But I want to die on a hill that’s called “Toadie is by far the most hard-done-by character Ramsay St has ever seen” and YES I REALISE SUSAN HAS SUFFERED AMNESIA AND ALSO HER HUSBAND’S CONSTANTLY ROVING EYE. I don’t care.

I found out Toadie recently lost his wife Sonya to ovarian cancer. This is very sad, and timely – February was Ovarian Cancer Month, well done Neighbours for bringing light to this often silent killer, I’m being sincere here. I imagine the scenes were really tough for fans to watch, too – Sonya has been Toadies romantic interest for years now, and they’ve suffered through a lot – fertility issues, Toadie’s like adopted child turning out to be Sonya’s biological one, fucken DEE BLISS COMING BACK BUT IT WASN’T HER IT WAS SOME FAKER?! Honestly, this show.

Toadie must be cursed. Here’s evidence.

1. Toadie Gets Charged With Inciting A Crime 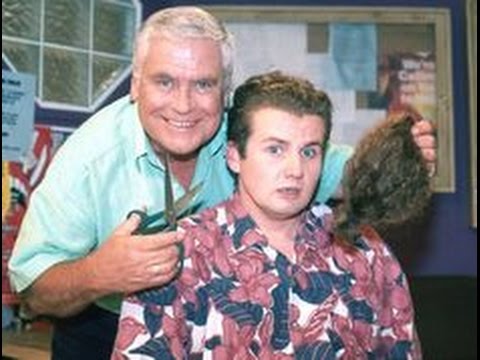 Wayyyy back in his Uni days, Toadie was working as a radio DJ. You won’t remember this because you are absolutely five years old (or at least you were when this happened). Anyway, he gives out some illegal advice and as a result ends up charged with inciting a crime. The incident did lead to Toadie pursuing law, which later became his career. But also, what person has such shitty luck that they give out illegal advice on a Uni radio station, with approximately two (2) listeners, and it leads to a fucking CRIMINAL CHARGE? No one.

I couldn’t find a photo of this scene because it’s from the Dinosaur Age, but that is a photo of when Toadie lost his mullet which was also a tragedy.

I believe it is when Toadie lost his mullet that he truly became cursed, because this bout of trouble? Oof, guys, it’s a fucking walk in the park compared to what comes for sweet Toadfish.

2. His New Wife Goes Missing Right After Their Wedding 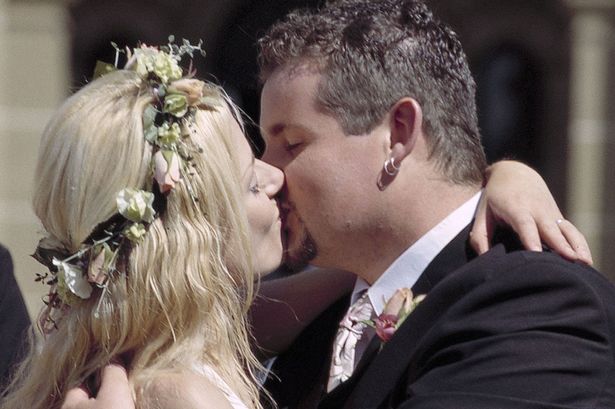 Anyone who is a TRUE AUSSIE knows about Toadie’s fateful first wedding. Seriously, fuck how many stars are on our flag or whatever the shit they make you learn for the immigration test – teach new citizens about That Time Toadie Drove His Wife Off A Cliff. Dee and Toadie were ~meant to be~, this iconic odd couple that started as mates and ended up as lovers. We were all incredibly invested in their relationship, so it gutted the hearts of Australia when, post blissful (pun intended) wedding, Toadie lost control of his vehicle and plunged the newlyweds into the ocean.

Toadie survived, Dee disappeared. This will be useful information later in this list.

3. His Best Friend Disappears, Turns Out To Be A Douchelord 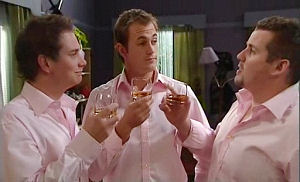 Firstly, extremely important to acknowledge the House Of Trouser (Toadie, Connor and Stuart‘s bachelor pad). Secondly, while Toadie was close with both Stuart and Connor, it was Connor who became his bestie – a bestie who then fell in with the Mafia through his relationship with Carmella, and then something involving Paul Robinson happened and anyway, Connor disappeared. Toadie was, of course, devo – he thought Robert Robinson (really), Paul’s son, had offed Connor – but it turns out Connor’s just fucked off. Seems worse tbh. Like literally, he showed up six years later and is all “I can’t believe everyone thought I was killed, I just went travelling!” Wow, what a piece of shit to piss off for years and not explain it.

4. Guy Sykes Shoots Him Then Also Kidnaps Him & His Adoptive Son

So Toadie becomes the guardian of this kid Callum at some point, but he also gets shot in the back before this happens by some guy called Guy Sykes. Anyway, Toadie almost dies, but he doesn’t actually die. In hindsight I think it would have been better if Toadie did die at this point because nothing goes up for this guy, seriously.

See, then Guy returned and took Toadie AND Callum hostage. Luckily, Toadie saved them but STILL. 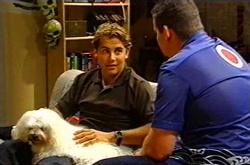 Sweet, sweet Bob. Toadie’s life-long mate, cruelly taken after Toadie discovers Bob has cancer. Sorry, dogs dying on these shows affects me so much more than people. I hate people. 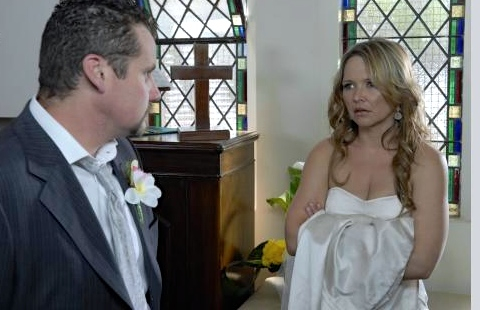 MATE. Steph and Toadie’s relationship a) never should have happened and b) if the producers were going to make it happen, it should have had a happier ending than “and they remained friends”. Basically, Toadie’s into Steph. Steph’s not into him. Then she is – they get engaged. Then, on their fucking WEDDING DAY Toadie realises Steph was never actually in love with him! So he leaves and travels to heal his broken heart. But that’s not the end of the shitstorm that is Steph Scully! Nope, Steph falls preggo to Dan, who is with Libby (her bestie. Wild stuff). Toadie helps out by pretending to get back with Steph, resulting in the destruction of his REAL relationship with Sonya, who he’s met in the meantime. Paul then blackmails Toadie, before revealing the lie and resulting in the Kennedy’s cancelling Toadie from their lives. Considering Toadie was once their borderline son, this is wild.

7. He Ends Up With A Low Sperm Count 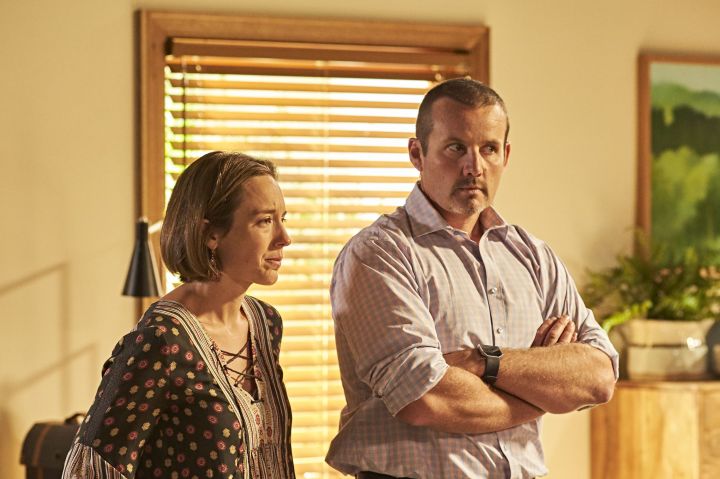 Not content to kill off his wife and then have Steph never actually love him, the producers then decide to quash plans for Toadie and new GF Sonya to have kids, by giving the guy a low sperm count! Instead of doing an IVF plotline they just make Sonya miraculously pregnant after a while of trying, so that’s super realistic. She gives birth to their daughter Nell, but not before collapsing from stress and scaring the bejeezus out of viewers, and then falling unconscious AGAIN after her caesarean.

8. A Fucking Gas Bottle Explodes At His Wedding To Sonya 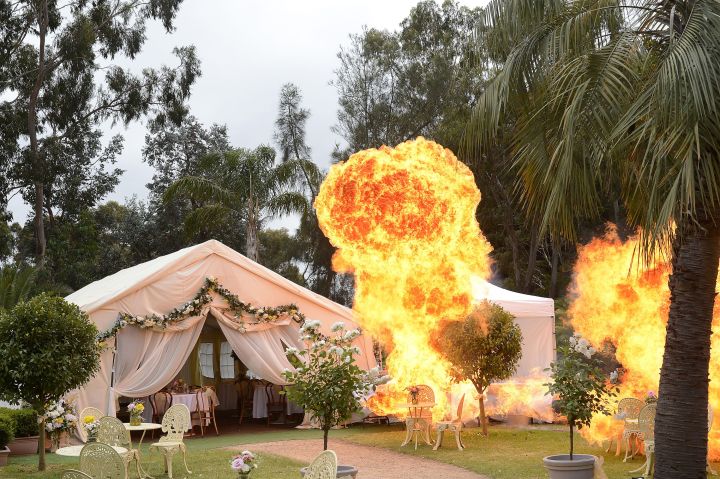 Even Toadie was working out he was cursed by this point – concerned his wedding to Sonya was blessed by the devil, basically, he’s got cold feet. But they go ahead with it and surprise fucken surprise, it IS cursed – a gas bottle explodes at the reception, knocking out Sonya (is this woman ever conscious?) and giving her the old temporary amnesia.

9. He Gets His Drink Spiked & Maybe Kills Robbo While Blacked Out 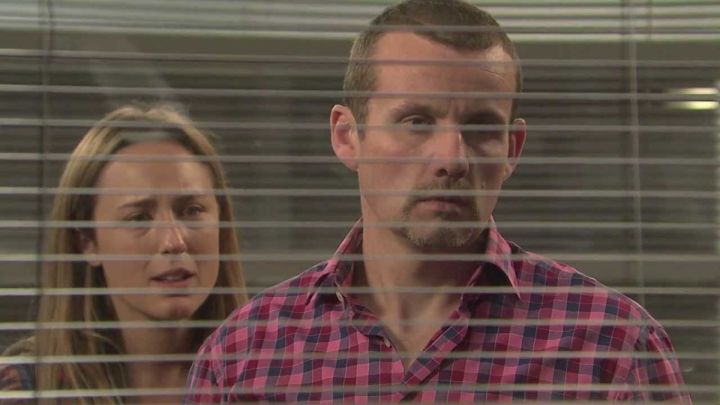 Bad guy Robbo threatened Sonya, so Toadie gets involved and this leads to Robbo spiking his drink, somehow. Toadie wakes up the next day with zero memory of what he’s said and done, but shocker – Robbo’s been killed in a hit and run and Toadie’s worried he did it. Eventually it comes out that Hudson killed Robbo, but still – who gets their drink spiked and then thinks they’ve killed a guy? 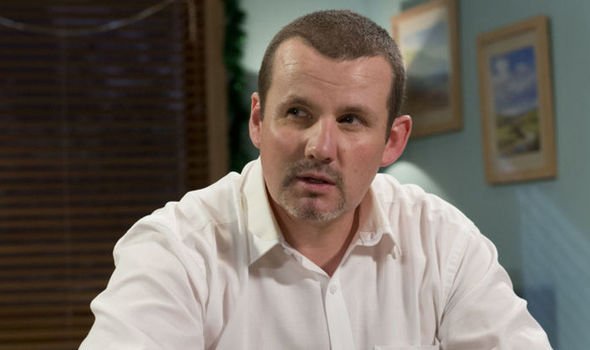 11. Then Fractures His Spine In A Totally Different Accident 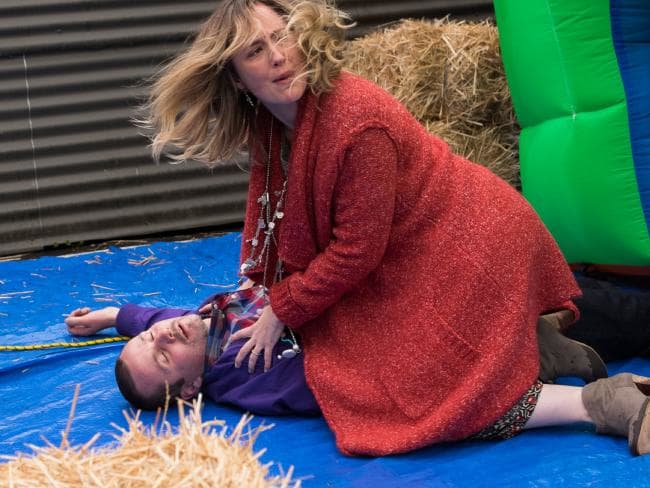 Okay I did not watch this episode but basically, Toadie goes in to rescue Nell from a bouncy castle that isn’t held down properly, and manages to land himself in hospital with a T5 vertebra fracture causing long-term paralysis??? But then the surgeon can’t remove THE BULLET from Toadie’s spine and tells Sonya he might be permanently paralysed from the waist down? Where did the BULLET COME FROM?!

Anyway, he’s in a wheelchair for a while, and he doesn’t cope too well with it – he convinces Sonya to let him mind Nell to prove he can cope on his own, but Nell runs into the street and almost gets wiped out by Sonya driving her car. Eventually he does go for the surgery, but then the surgeon Belinda has some sort of beef with Toadie, Sonya reckons she’s gonna botch the job on purpose, so Sonya interrupts AAAAND! That results in, somehow, a complication that leads to Toadie becoming INFERTILE.

INFERTILE. From spinal surgery. Is that even possible? Did the knife slide all the way through and puncture both testicles? I don’t understand. But just quietly what a fucking PLOTLINE, bravo producers. You batshit demons, you.

12. Dee Rises From The Dead Except Not Really

The greatest plot twist the Neighbours producers ever came up with was bringing back Toadie’s missing wife, Dee Bliss. Remember her? She went missing when he plunged them off a cliff into the ocean! Dee tells him she was pregnant at the time of the accident and introduces him to “their” daughter Willow. I know you know where this is going.

Yep! Fake Dee! After Toadie starts falling for his ex again and growing closer to his surprise kid, it’s revealed that Dee is just a fraud, a woman named Andrea Somers – but not before Toadie fucks her and IMPREGNATES HER WITH HIS MAGICAL PENIS THAT WAS MEANT TO BE INFERTILE, YOU GUYS.

Naturally this whole thing ruins his marriage with Sonya, who spots them fucking, loses the baby she was carrying for Steph and Mark as a surrogate, and then splits with Toadie.

13. Even His Fucking Psychologist Is Even A Life Nightmare 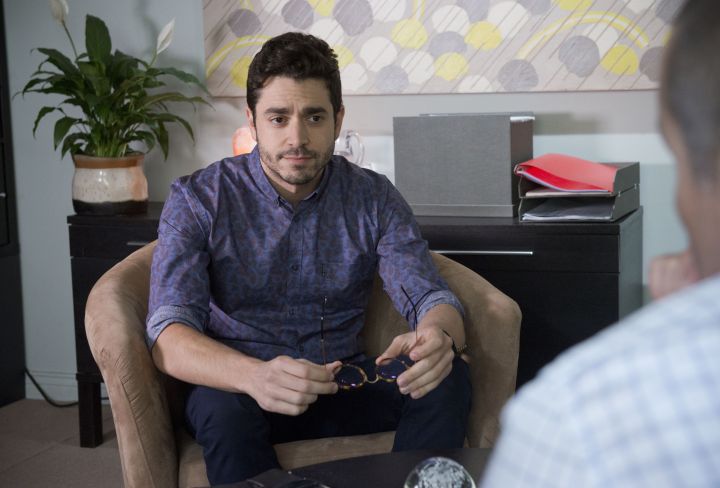 After the Fake Dee situation and the breakdown of his marriage, Toadie is understandably a bit messed up in the head. Him and Sonya start to finally get back on track, so Toadie goes to see a psych to keep his mind in check. Great move! Except the psychologist turns out to be Sonya’s ex, and then reveals he might have feelings for Sonya still. Hoo boy. To be fair, Sam the Psych is pretty good about it all and encourages Toadie to visit a new psych – but he also then decides he totally does still love Sonya and tries to get her back.

At least this time he doesn’t resort to crimes in doing so, and Sonya rejects him, realising she still hearts Toadie.

14. His Love Child Causes A New Rift In His Rift-Filled Relationship

I told you this guy was cursed – as soon as Sonya and Toadie renew their vows and commit to a life together, Fake Dee (Andrea) reveals her pregnancy and subsequent kid with Toadie, Hugo. Sindi Watts, someone Toadie dated once who is for some reason connected to all this shit, brings Hugo to Erinsborough and says Andrea (Fake Dee) is now in a psychiatric hospital and Toadie will need to raise Hugo.

Sonya is understandably a bit put off by this development and it looks like their relationship will suffer, but miraculously it does not. But it does lead to… 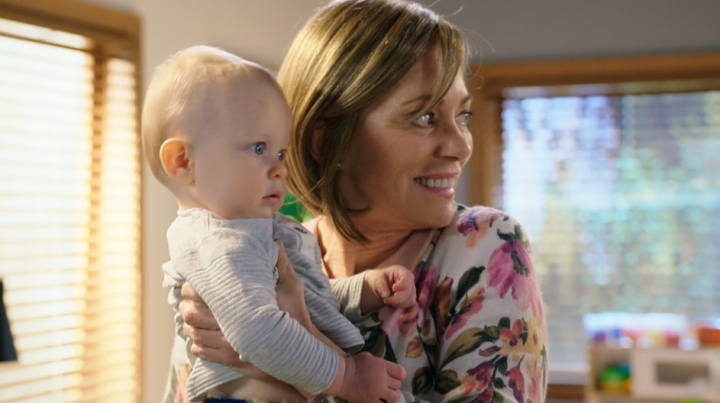 Alice Wells is hired by Toadie and Sonya to help them raise Nell and Hugo while managing their businesses, but surprise surprise – Alice is an evil psychopath who starts drugging Sonya with painkillers. Turns out she’s actually Heather Schilling, Andrea’s mother. She posed as a nanny so she could ruin Sonya and Toadie’s marriage so Toadie could be with Andrea! Great news, guys!

This is actually super devastating guys – after ALL their shit, Sonya ends up being diagnosed with stage 4 ovarian cancer, leading to a quick deterioration in her health and sees her dying in Toadie’s arms during a trip to the beach. CAN THIS GUY HAVE LIKE ONE NICE THING, FOR FUCKS SAKE.

In slightly good news, the couple at least get full custody of Hugo – a conversation between Sonya and Andrea that also reveals that the real Dee might actually be alive and going by the name of Karen, can you believe. So here’s hoping there’s a real Dee/Toadie reunion on the cards and that this time, his wife doesn’t cark it.

If you don’t believe this guy is cursed by now, I don’t even know what to do with you.