I for one am extremely excited about The Meg, not because it’s a good film – it’s fine – but because it has brought gigantic murderous sharks back where they belong: the big screen, baby! For too long movies about killer sharks which are simply too large have been relegated to zero-budget Syfy movies and the DVD bargain bin.

I don’t believe I am overstepping any boundaries when I say not only should there be more blockbusters featuring or alluding to sharks, but there should be commensurate Oscars categories (Best Shark, Best Shark Attack, Best Closeup Of A Grizzled Sea Captain Saying “That Ain’t Like No Shark I’ve Ever Seen”, etc.)

I have watched many movies about big sharks. They appeal to two of our greatest fears: the unplumbed depths of the ocean, and being eaten by a fish. Now that you’ve seen The Meg (or are planning to) here are the shark movies I have seen, ranked. It is not exhaustive. Absolutely no feedback will be taken on these. These are the best shark movies. Also, the worst ones. 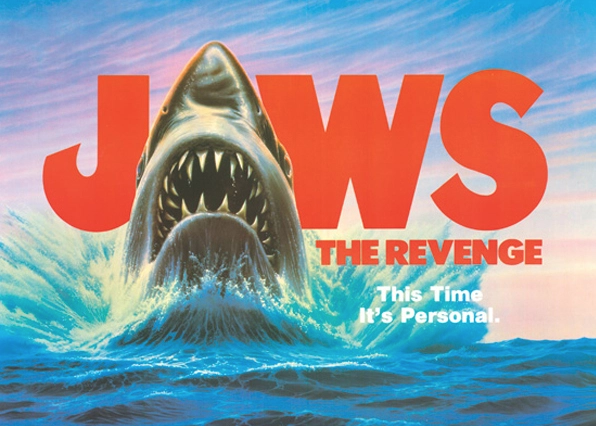 The fourth Jaws movie is widely remembered as not only the worst shark movie ever made but also one of the worst movies ever made period.

The central conceit of this movie is the frankly absurd assertion that sharks are capable of seeking revenge. Ellen Brody, the widowed wife of  Martin Brody – the police chief from the first film – is hunted all the way to the Bahamas by a murderous shark hell-bent on revenge for her family’s constant disrespect. She also develops a psychic link with the fish and has vivid nightmares whenever it is near. It sucks.

Here’s some bonus trivia for you: in the novelisation of the movie, author Hank Searls basically ignores the entire plot of the theatrical version and posits that the shark is being magically controlled by a vengeful voodoo doctor who hates the Brodys. Imagine Steven Spielberg reading that. 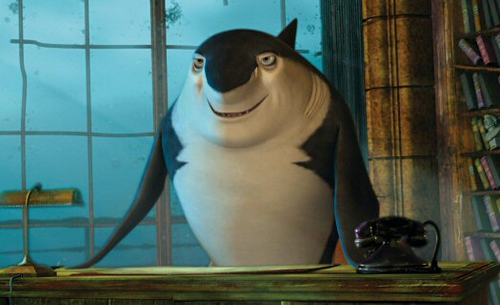 Fuck this movie. Nobody gets eaten. 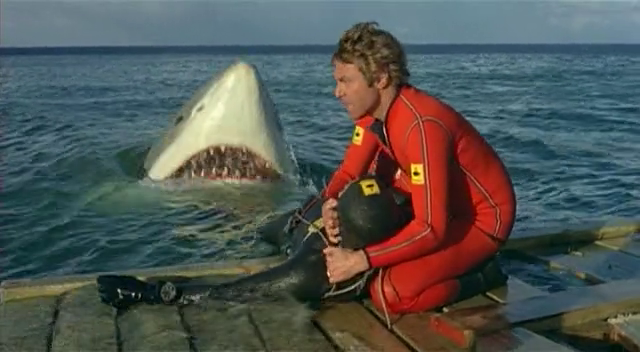 During the 1980s there was a huge wave of Italian shark movies, representing a bizarre fusion of Italy’s nascent exploitation horror cinema with the runaway success of Jaws.

Most of them aren’t very good, and either feature absolutely abysmal shark puppets or literal stock footage of shark attacks from other, even worse films. I only include this one because it was such a blatant rip-off of Jaws that Universal Pictures successfully got a federal judge in the U.S. to pull it from cinemas. That’s a shark movie with world-historical legislative significance.

BEST QUOTE: “The actual triangle in which the regatta takes place will be 100% safe. Gentlemen, absolutely nothing is going to happen.” 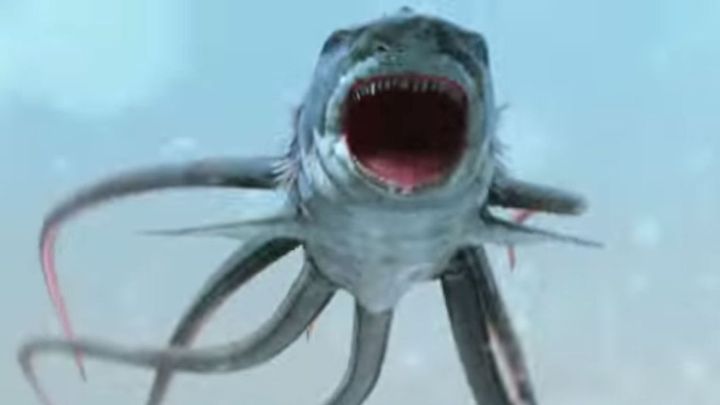 I mark this movie down for squandering the concept of a shark-octopus hybrid, which is extremely cool by its very nature.

To be fair, it’s not even particularly clear what advantages a shark with octopus tentacles would actually have aside from being marginally more frightening than a regular big shark. But I’m nitpicking.

BEST QUOTE: “Trust me, okay? There is no such thing as a sharktopus.” 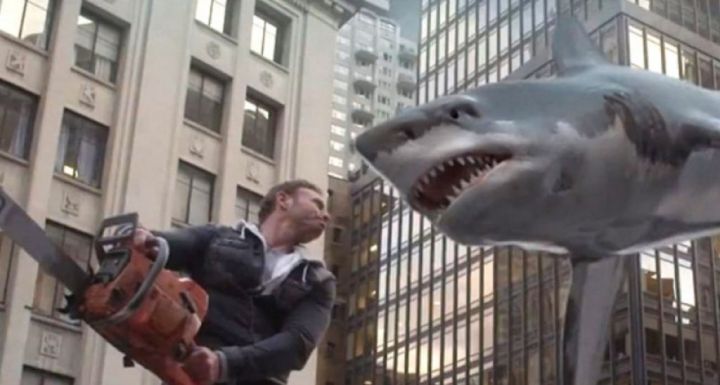 For the sake of brevity, this entry represents all of the Sharknado movies because they’re essentially interchangeable at this point.

The first one was hilarious fun and essentially the apotheosis of the dumb SyFy shark movies. The ones after were way too self-aware and loaded with the dullest social commentary imaginable. Just give me big-ass sharks hurled skyward by a tornado. Leave the politics out of it, folks! 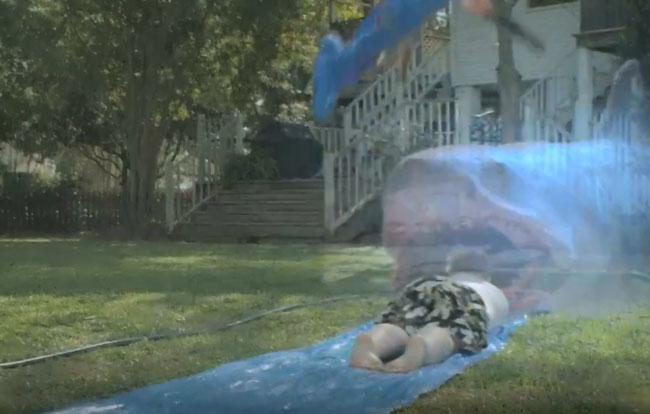 I need to give this one points for the sheer originality of its premise: a shark is tortured to death by cruel fishermen, and its body drifts down into some kind of magic cave which causes it to be resurrected as a vengeful spirit.

The truly scary thing about this shark is that it has the ability to appear anywhere there is even a small volume of water. At some point, it eats a child on a slippery slide. Here, have the above pic as a GIF.

BEST QUOTE: “Ghosts are real, as real as the lies this town is built on.” 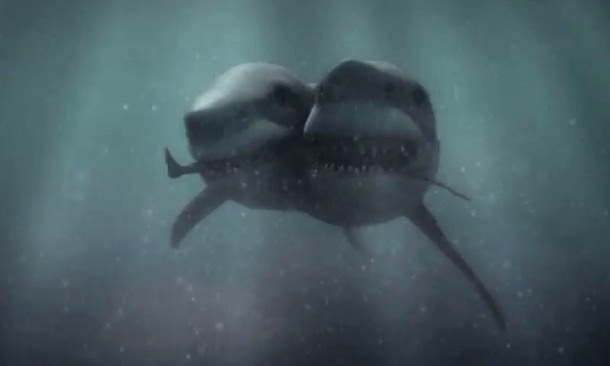 I’m only ranking this one so highly because I respect its constant commitment to self-oneupmanship. Whereas Sharknado has continued to make sequels which are more or less based on the original premise and celebrity cameos, the Two-Headed Shark Attack series has cleverly expanded on the first film by simply adding a new head with every entry.

They’re up to six heads now. One of them is on the tail, which is a terrifying rebuke to the conventional wisdom that the safest place to be is directly behind a shark. Here’s the trailer for the five heads variant.

Oh, the movies completely suck by the way. I feel obligated to say that explicitly because I have put them so high up on my list for comedy reasons.

BEST QUOTE: I do not remember any quote from any of these films, though I’m sure at some point they point out the number of heads the shark has. 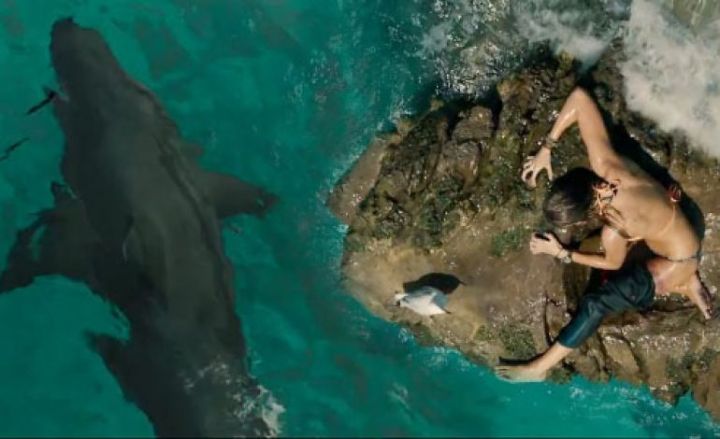 Despite the idea of Blake Lively being trapped on a rock for an 86 minute movie seeming like the most boring thing imaginable, The Shallows is actually pretty decent, and tense as hell.

There’s a prominent subplot where she names a seagull ‘Steven Seagull’ for some reason. I have no idea whether to add or subtract points for this particular diversion. 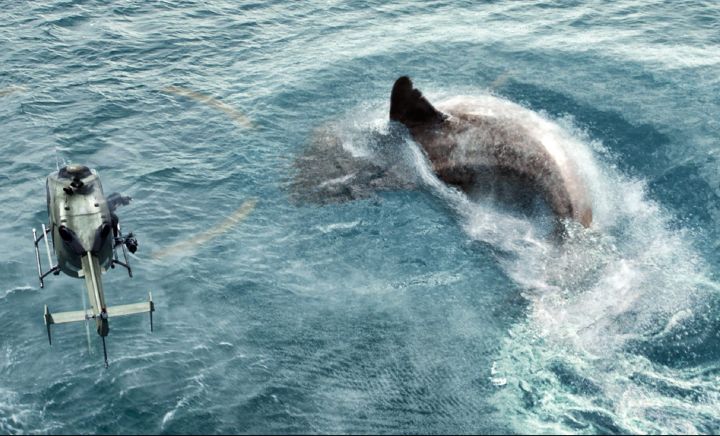 The Meg is enjoyable. The special effects are mostly better than you’d expect from a B-movie, and Jason Statham proves that he deserves to be in more action movies again.

My complaints would mostly be that there’s a lot of screen-time dedicated to things which aren’t the megalodon itself. It has one great thing going for it: a beach scene with probably more extras than I’ve ever seen in any other movie. The bad part is that the meg eats maybe ten of them max. Boo! 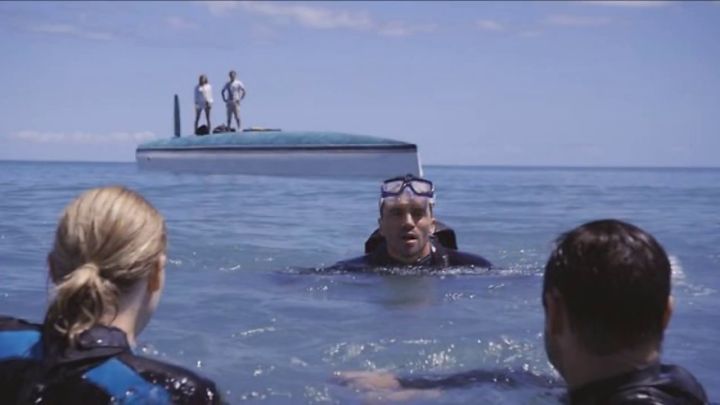 Gotta include an Australian entry here. And The Reef is actually good as hell – amplified by the fact it uses real shark footage  instead of CGI monstrosities, which adds a certain degree of realism to the proceedings.

As with several other entries here, it’s about a bunch of mates being stranded on a reef while a great white stalks them. Standard fare, executed well. Can’t beat it! 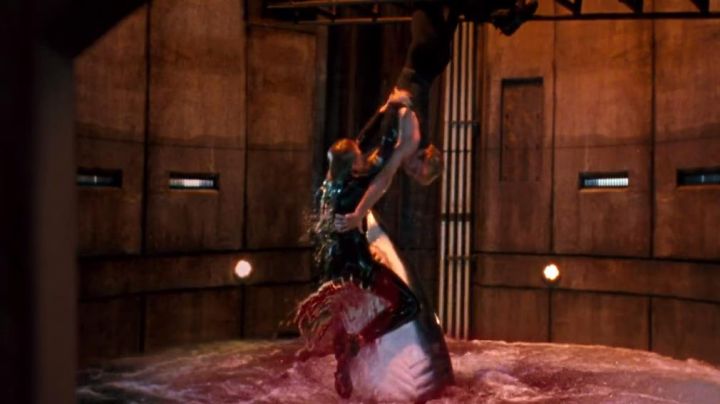 Deep Blue Sea is based on an absolutely intoxicating premise: what if a shark was a genius?

Thanks to being treated with an Alzheimer’s cure for reasons which are never fully explained, a group of mako sharks develop hyper-intelligence, which gives them the ability to do things like push LL Cool J into a submerged oven and then turn the oven on.

It’s actually unusually well shot for a late-90s B-movie, which elevates it beyond where it deserves to be on concept alone.

BEST QUOTE: “That’s what an 8000 pound mako thinks about. About freedom. About the deep blue sea.” 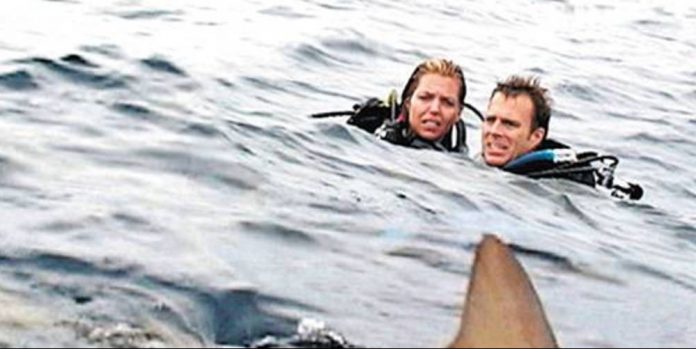 Ignore the sequel, which unbelievably did not feature sharks at all in what could possibly be the greatest act of disrespect foisted on the shark movie-loving public. Open Water is the real deal – an intense shark chiller which gets an unbelievable amount of mileage out of how scary it would be if you were floating in the middle of the ocean with some sharks underneath you.

It’s also one of the only films on this entire list which isn’t deliberately very stupid by design. This isn’t a good thing, by the way. It’s just a neutral observation.

BEST QUOTE: “We’re stuck in the middle of the ocean!” 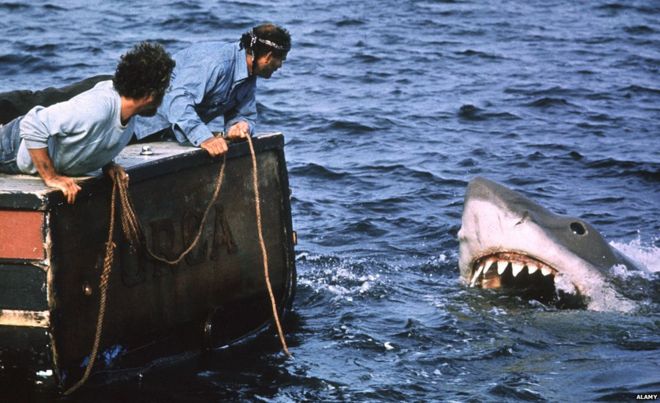 Yeah, it’s obvious. Sorry, Jaws is just really good. Every single film about a killer creature made since 1975 has taken some influence from Jaws whether overt or otherwise.

Its grim lesson that a shark is much scarier when you can’t actually see it has been largely ignored by basically every other shark movie on this list, all of which are of the belief that sharks are much scarier when they have octopus tentacles and are in the process of being flung straight at you by a tornado.

The OG. Thank you Jaws. A note for the more literary-minded among you – if you ever feel inspired to go and read the original Peter Benchley novel, be warned that much of it is actually not about a shark at all but actually about the mafia and a steamy adulterous fuckfest. This very much confused 12-year-old me.

BEST QUOTE: You know the quotes. Don’t mess with me.