Hello friends, welcome back for another week of The Bachelorette. Isn’t it good to be here? Lying on a bed of rose petals, gasbagging with your buddy Hannah about Ali Oetjen and all her muddy feelings. It is good to live through other people’s relationships so you don’t have to worry about the entire lack of romance in your life!

We have my flatmate Joe as a guest star today because why not? It’s good to get a red-blooded male’s point of view.

Anyway, the boys are talking about their feelings (refreshing!). Ivan is worried he’s been too busy dancing to have connected with Ali. Maybe dance less? That’s my professional advice.

In comes Osher wielding a single date card. Of course they all want it! That’s the entire point of this enterprise! Duh, says Jules. Jules knows. This is all intercut with some primo alpaca footage.

Anyway, Rob gets the date which really bums out Ivan. He’s got his head in his hands. Bill gets a big hug from Rob when he decides not to snatch the date out of his warm Italian fingertips with the power of the ‘wild rose’. Oh you boys and your roses and hugging.

Ali explains her choice as mostly being due to their chemistry and connection during that Mills & Boon shoot last week, and also he’s a great pash. Girl, you don’t have to explain loving the saucy boy. We totally get it. She arrives to collect Robbo in a speedboat. She’s wearing a light blouse and jeans and he’s got a very ugly sweater and leather jacket on, and it seems like they each have very different ideas of what the weather is like today.

Anyway, it’s another one of those ‘extreme things’ dates that the Bachie franchise relies on to make the show watch-able, and because otherwise they’d have to show the contestants actually relating to Ali on a human level. Rob wants to go faster on the speedboat, so they make it to Cockatoo Island in no time, a place Rob did not know existed. It’s a cool place, Rob, come back during Biennale.

Joe thinks Rob’s got a boring face and it is boring he wants to go “fast“. He’s really stuck on the repeated use of the word “fast“. Cockatoo Island’s cool but.

They’re going to paint their relationship issues onto big canvases and then “smash through them“. For Ali it’s ‘falling fast’ and ‘naive’ (The Kooks plays). Rob writes ‘manipulated’. Just before the cutaway, we also see what Rob’s final word choice was and it’s ‘communication’. Why communication? I would think that communication is important to a relationship.

This boring time is ruining Cocktatoo Island for Joe.

Let’s check in on the other fellas, shall we? They’re all just kicking the footy around, it’s “mancho-relaxo” in Jules’ words. Meanwhile Ivan is practising his dance moves. That is what he does. Joe appreciates Ivan’s commitment to dance. But oooooooooh, Toddo found a group date card. 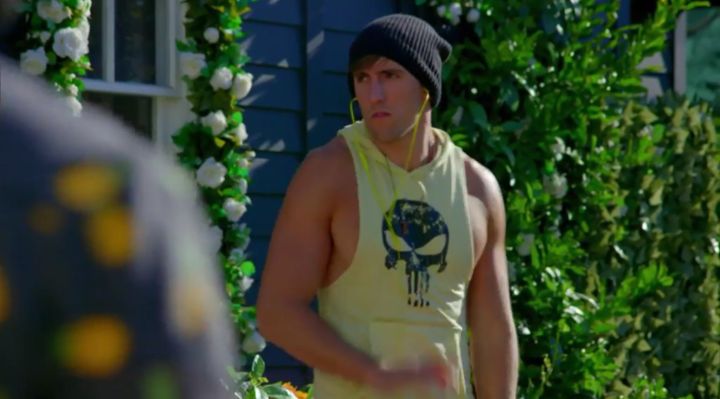 Life is dance. Dance is life.

Still Paddy hopes something else is in the envelope: “I reckon it might be Rob’s plane ticket home.”

Instead they’re all going to the “Colosseum of Love“.  It is fun for Paddy and Pete to rag on each other playfully, and so is the boys’ daywear! Look at those ugly sunnies! So many caps!

Back after the break to that date. They’re going to run a dune buggy through the canvases, which seems wasteful. They pash after their shot of adrenaline, good job. Having seen the whole date, Joe reckons whoever dreamed it up was high as balls on coke. That’s why it all has to be so “fast“. 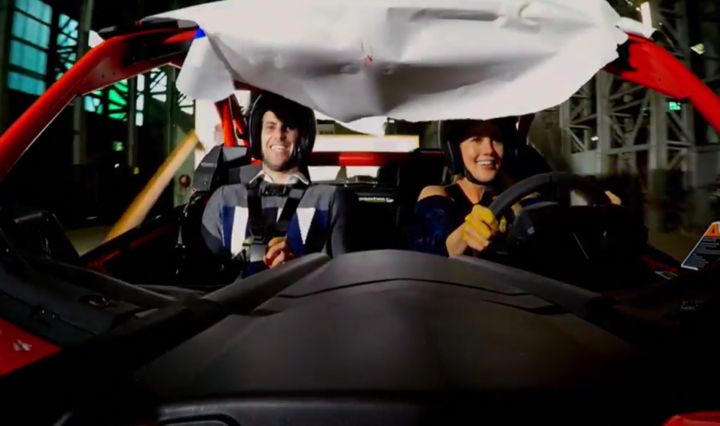 I am grinning imagining crashing this buggy into the Harbour.

For the sitdown section, they have to resist necking all night. They’ve returned in different outfits and hold up a second. I know I say this all the time, but I need to know how this actually works. Do they each pack a bag with a change of outfit for every single date?

She’s got the tomato sauce bottle out Rob gave her on the first night, and bb that’s a food hazard, you should’ve consumed it all within three days of opening. She made a relish with it anyway yesterday apparently. Meanwhile Joe appreciates the “structural continuity” of the sauce. He likes that they’re talking about food not feelings.

They’re very keen on each other very quickly and it’s yucky. Even though they smashed through the word ‘communication’, Ali really wants a “good communicator“. You can’t have the word back, Ali. You burst through it mere hours ago! Ugh the kissing sounds.

To keep it interesting this is all spliced with footage of Paddy and Taite (I’ve realised I barely know the difference between Taite and Pete) feeding alpacas, which they have named after their fellow contestants. What cheeky boys! What natural hijinks! Charlie the Alpaca is standoffish, just like the real Charlie! Because, remember, Charlie is only here for Ali. It’s a good bit. The boys decide Rob is destined for the “friendship zone“. Cool. Joe appreciates the alpaca television – and how talking about your emotions while feeding alpacas is novel.

Rob gets a rose, and Ali straight-up says she’s thinking about boning him. Oh well, guess they’re settling for a teen-style makeout sesh instead!

Now it’s time for the “holy macaroni” gladiatorial battle. It’s an excuse for every dude to be shirtless and have their pecs all out and rippling. We see through you, Ali (your dress is nice). Osher thinks it’s all a ripper good time. But you gotta feel for the blokes who are less/not ripped, see: Dan, Jules, next to a bunch of six-pack-having absolute units. Joe is here for the blatant ‘thirst’, something that you just can’t get away with on The Bachelor. He’s pointed out that there’s a nip in every shot. I’m pro the nips. 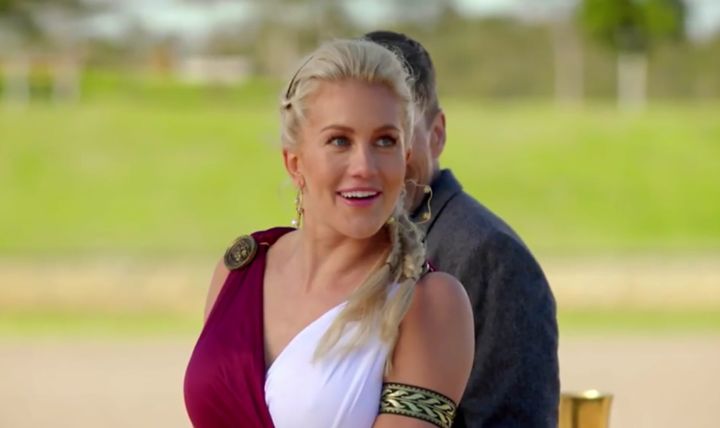 The facial expression equivalent of a wolf whistle.

It’s a competition for one-on-one time, Ali is throwing out obviously scripted quips, Pete‘s keen to cheat, fails to do so. They do this whole chariot race with water thing, and for some reason Charlie and Bill are on the same time which of course breeds animosity. The dudes don’t like each other. I’m distracted because of the weird holes in Charlie’s T-shirt during his pieces to camera, but he seems to be saying he’s embarrassed they almost lost and Bill’s lack of leadership is at fault. Joe is mostly watching how Ali is eye-fucking all of these blokes all of the time.

Anyway, it’s okay, they’re still through to round two because Rob’s team fucks it. So they get to play tug-o-war, except they’re each in it for themselves. So that means that Bill blatantly pushes Charlie and is not being very helpful. Like instead of pulling with both arms he always has one reached back and strangely low to the ground? It’s not a good look. Charlie has a tanty when Bill gets his flag, but Ali helping him back up pretty much makes his day. 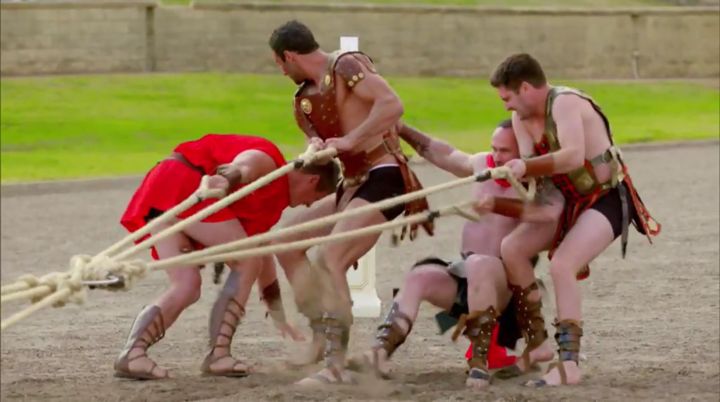 I can’t see without my hipster sunglasses.

Ultimately the final four is Ivan, Bill, Damien and Nathan, and she picks Ivan for the one-on-one time. It doesn’t go well. He even does a fkn winner’s dance, and we’re all over the dancing now, mate, rein it in. Joe loves the dance. We’re different people.

The soundtrack for their time together is super weird, it sounds almost like DeVotchKa‘s ‘How It Ends‘ which is strangely fitting considering how poorly this is about to go. Ivan’s this loveable goof with a big grin but he wants five kids in a very short period of time, which is not something Ali’s keen on.

Joe: “How are you going to pay for five kids with your passion for dance?“

He also asks her if she’ll move to Atlanta with him so he can follow his dancing dream. That’s a “sore point” for Ali. Another thing: he doesn’t know how to pour champagne. Tilt the damn glass, kid.

Anyway it seems pretty likely he’ll be going home, considering Ali seems to be the type of person who ousts you as soon as you don’t fit neatly into her five-year-plan which involves marriage, a kid, and living in Adelaide. Their lives are on different trajectories.

Ali found the one-on-one time deeply awkward. Ivan has no idea and wants a kiss anyway. But Ali is explicit about not feeling chemistry on any level, not in terms of personalities or physically. Oh you foal man, Ivan, you’re defs going home.

Joe: “Yes! Express your love through the medium of dance!“

Anyway, Ivan’s big surprise is supposed to happen after Taite and Ali finish chatting, but heyo, Bill cuts in, and everyone is fumin’ about the DISRESPECC. Paddy promises to shove the wild rose up Bill’s arse. Graphic. See how the narrative changed? Now it is Bill who is only in it for himself. He’s the new Charlie!

Ivan feels betrayed by Bill, as the pair return holding hands, but that wont stop him from strutting his stuff in his little tank top. Jules fkn loves it because he’s a supportive excited guy. Joe wants the man who loves dancing to find love; he deserves love. A bunch of blokes are surrounding the dance in a weird semi-circle, clapping and weirdly shuffling. They’re like the dudes in a boy band waiting for their verse. 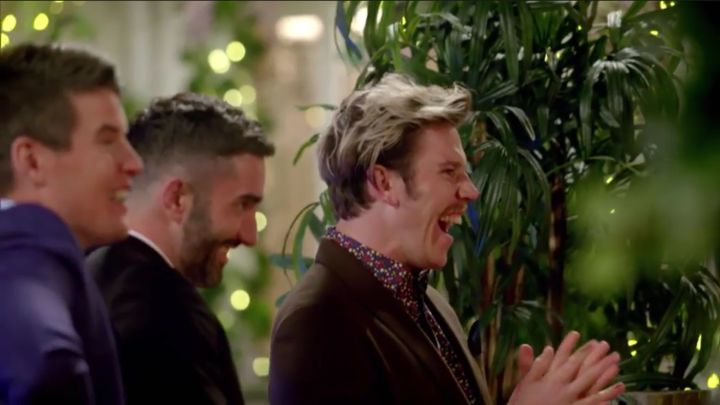 Have you ever seen a happier man?

Charlie decides to confront Bill and “put him in his place“, and isn’t this all exactly what Charlie did last week but under slightly different circumstances? You’re just looking for a reason to be mad at Bill, your biggest threat. Bill says he didn’t know Ivan had a surprise at all. Anyway, Charlie says it’s “clear as day you’re here for yourself“, just as all the men are. That is the whole name of the game. And no matter how hard you wish for it, Ali’s not sending that strong-jawed man home just because you want her to.

Alright, Bill what does your voiceover have to say: “I don’t really give a shit what Charlie thinks of me.” He is now, just like Charlie, being totally honest about the fact that he’s not here to fuck spiders: he’s here to find love!

This season really is boiling down to dudes talking about ‘disrespect’. Charlie thinks if the respect is gone there could be MAYHEM. Big words. I’m over it. Let’s hurry this along.

ROSE CEREMONY! Rob is safe obvs. Two people are getting the boot/pointy stiletto. It is fun that all three Dan((ny)iel)s know which nickname refers to which of them. I would find it confusing. Joe is sad that the boys don’t get pretty long-stemmed ones either.

How the hell is Ivan still here? And dancing over for his rose? I’m uncomfortable now. Joe is now pitching to Channel Ten a show about Ivan trying to realise his dancing dreams, all while raising a small army of children.

This is a sad moment for Damien and Wesley, neither of whom stood a chance. She doesn’t like long-haired blokes, and she doesn’t want a dude in his 40s. This is still the face value stage of the game.

Looks like tomorrow will be the day we see the Nathan-Charlie throwdown. Also apparently Danny or Daniel (who knows which is which???) gives her an unwanted kiss. Oh no.

SEE YOU THERE, LOVERS.