‘BACHIE’ RECAP: Twister 61m In The Sky Is A Sexy Disaster Waiting To Happen

Friends, we’re back together again at last, for this, the second episode of The Bachelorette season four. God I’m so excited I could literally spill my tea. Boys, back pats, abs, it’s all here, it’s all going down. Did you miss our first night together? Catch up on the first ep below:

READ MORE
'BACHIE' RECAP: Already We Have A Tense Rivalry, A Dance Crew & A Daddy

The boys are hanging out debriefing on last night’s first cocktail party – I’m presuming if they finished up at 4.30am like our new mate Brendan Cavanagh said that this is some time in the late afternoon – talking about how well Ali Oetjen handled all that masculine energy and about Bill, the holder of the wild rose. Maybe he’ll use it strategically! Maybe the time will just be right! We don’t know!

Osher is here and everyone is very pleased. It’s a single date! I think the man who is called Pete, the one who dobbed on Buff Zac Efron to Paddy because they’re bezzie mates already somehow, has picked up the card, but I can’t be sure, because he’s wearing a hat.

Charlie! So much friendly patting! Boys! Boys! Boys! Bill and Charlie have a little hug because the former did not steal his date – which remember, he has the power to do. It’s because he doesn’t see Charlie as a threat, and mate, look at Charlie, he looks like he could take care of you. Charlie is definitely a threat. But also is this Survivor or The Bachelorette, is it really possible to have a strategy?

They’re at a fancy hotel in “downtown” Sydney, which has literally never been called that before. I’m from Sydney, I know. It looks like the producers made Charlie take the bus. His pants are very tight and Ali is wearing activewear.

Ali is looking for someone who can be “nurturing in a time of extreme stress” so they’re going to play Twister suspended 61 metres above street level. She said “shitless” which is a naughty word! But you would be fkn scared up there, and I don’t know why you would plan this date, Ali, why can’t Bachelor(ette) contestants go on nice dates on the ground?

We cut to the house where Paddy breaks the unwritten rules of the Bachelorette, which is that you are supposed to be happy for and supportive of your fellow prisoners when they go on dates. He says he hopes it rains and that Charlie cooks it. Only some of the boys find it funny – Italian Rob especially does not like it – because it is not funny to say you hope someone’s face gets messed up. This lad really is deeply unpleasant, has tickets on himself, I want him gone already. 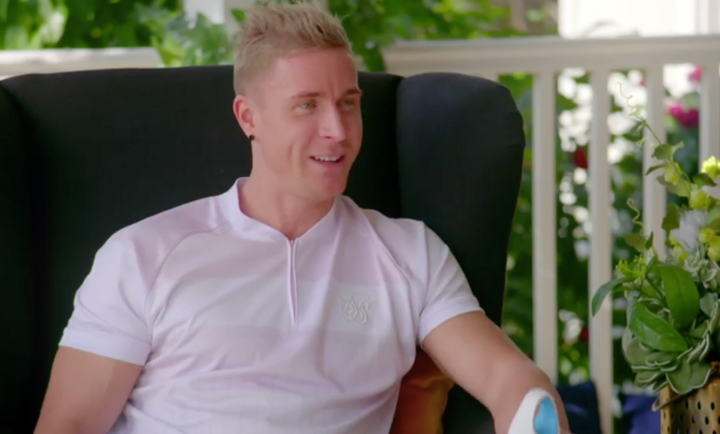 Behold, the face of a sociopath.

Tall Guy Ivan dances a group date card in to the boys. They know they’re doing a photoshoot because this is how these shows work, the photoshoot happens as early as possible and the villains always wear stupid-arse costumes. It’s Bachie canon.

Secret Scot Cheyne says he would like to brush Ali’s hair, it’s weird.

Here’s the date: Taite, Daniel, Toddy, Damo, Dan, Robbie, Danny, Jules, Ivan and Paddy. My favourite thing about the bro-ness of The Bachelorette is how they all “Eyyyyy,” and cry out each other’s Aussie-as nicknames when their names are called for dates. It’s almost… sweet?

Paddy is definitely one of those dudes who is very nice to your face then awful as soon as you aren’t around – that is the only way I can get my head around Ali wanting him anywhere near her.

Being up high is a great excuse to hold hands, Charlie knows it. He’s also very good at working precariously up high-rise buildings, what with being a builder and all, so he’s ready to talk Ali down as she straps into her harness. “You’re safe, you’re safe,” he says, and Ali looks dead behind the eyes and almost cries because she genuinely thinks she is going to die today. This date was a real bad idea. Please don’t actually play Twister. Please just dangle up there. Just sit together real close and hold hands. Considering how much I fall down and off the mat playing Twister on the ground, this is a fkn disaster and I hate it. Ali already wants to go back, she’s understandably petrified, and Charlie sounds very kind and reassuring and can I have Charlie please, he seems nice.

Charlie is taking care of her and she is clutching on to him for dear life, and calls it, they go back to the roof and do not try to play Twister. “Being here right now is what it’s all about: it doesn’t matter what we do,” he says. I’m in love with this dude already. The fear means Ali decides to give him a big ol’ smooch up in the air. I feel like this is the most kisses we have ever had this early in a season, wow. But yeah if you’re that scared and someone is being that caring, ya smooch ’em. I get ya, Ali, I’d wanna do that too. Probably more than that tbh, but let’s not get vulgar. 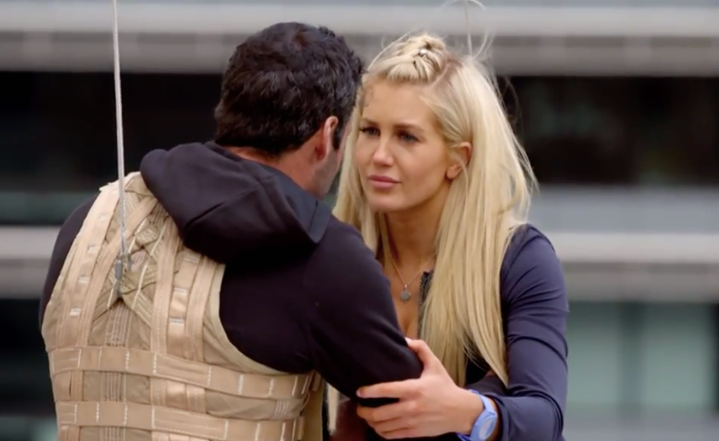 I am shitting bricks but also kiss me pls.

Time for a change in outfit and some sparkling wine safely inside! She really, really likes him already and gives him a little rose. I wish the dude had to hold the big long stemmed roses and didn’t just have bb ones attached to their lapels/collars/buttons.

“At this rate I’m gonna wanna pick them all,” Ali says, speaking about how she would feel if all the dates went this well. Can I just say I predicted that very thing last week?

If honey badger can choose no one, can Ali oetjen choose to fall in love with every one #TheBachelorAU

Moving on. Everyone – especially Jules – is very excited to see Charlie and get all the goss on their big date. Bill’s rolling his eyes at Charlie’s whole don’t-kiss-and-tell schtick. Charlie can “definitely see himself falling in love with Ali“: “She knows exactly what she wants and she’s very strong about it and if you’re not ready for that, there’s the door.” A gentlemanly way to say sod off now, dudebros.

The group date is of course a photoshoot for actual Mills & Boon romance novels. I love how Jules has a stunned, open-mouthed but excited look on his face at literally all times. Also I may need to buy these novels.

Showgirl Ali is out. Danny, Jules and Ivan are doing summer fashion week by getting shirtless and into togs. Ivan has quite the back tat, wow, okay. Jules is in double denim as the photographer. The other boys are looking up at her in awe because they’re thirsty boys. Ali oils Ivan and Danny up herself because she is a thirsty girl. Honestly I’m enjoying watching Jules direct them, it’s super funny. The other boys don’t like it. 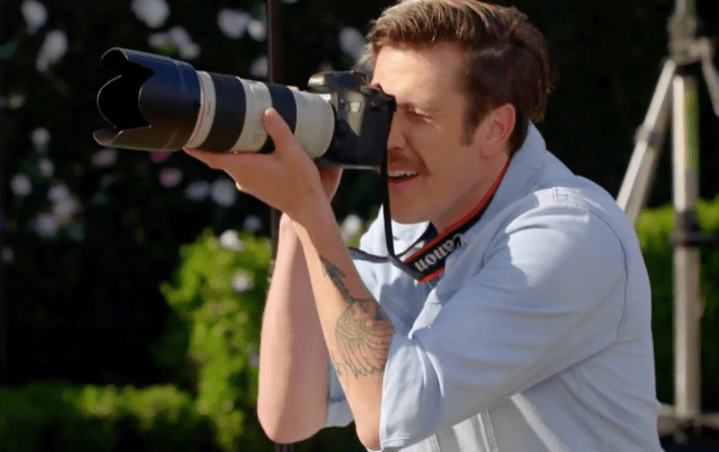 Paddy and Rob are doing a spring break photoshoot – Paddy is the bell boy for Italian Rob and Ali, the couple, so the latter two get close while Paddy is but a background character. So of course he goes the naughty route, which makes Ali feel objectified and please just send him home right now on the spot. She also fancies Rob now and has to stop herself from pashing him.

Dan, Daniel, Damien and Todd are doing autumn, and Todd has done a bit of modelling before and of course he has with that face, put that face away. Todd is a gatecrasher, Damien is a bartender, Dan is a bodyguard, Daniel is Ali’s date. There are two many Dans I really don’t know which is Danny or Daniel, I’m taking my queues from the telly. Todd gets to be shirtless and he should never be allowed to wear a shirt again. They’re staring into each other’s eyes. Dan takes over to make some inane chat with Ali and it’s awkward to watch. Fine, I finally admit it, roast duck chat is bad chat. I am officially sorry to every man I have asked “What is your favourite roast?” (Yes, there was more than one). 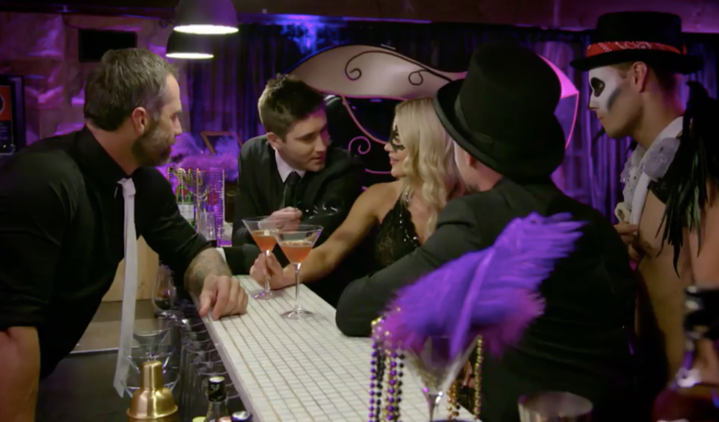 Omelettes, do you like omelettes? Me too! OMG, we have so much in common.

Taite and Ali get a lone winter photoshoot. They’re all close to each other in fake snow, close enough to kiss. She says it feels sexy but from here Taite seems insincere. The dudes are watching it all happen, drinking their Pure Blondes (A SPONSOR???). Ivan compares Ali with Taite to his favourite meal at a restaurant being taken away, which is gross in ways I don’t feel I should have to explain.

COCKTAIL PARTY, BABY! Even the way Paddy sits is a douchelord look. I was trying to just report him rather than call him a jerk constantly, because I feel like it gives him oxygen, but Jesus can he just move on to his rightful place on Love Island already? Ali sneaks Rob off for a steamy kiss during the cocktail party which is quite the move, okay. She really did like the soft-spoken pasta boy during the photoshoot. 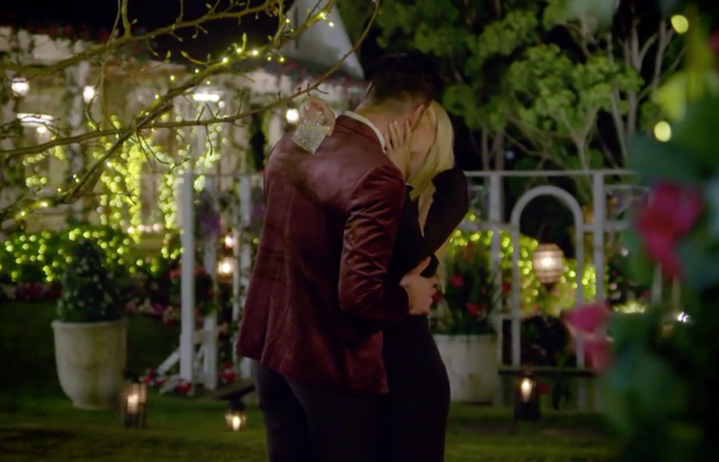 That’s three boys she’s had a pash with.

Apparently Charlie said he wouldn’t cut anyone off and would let the others have a go with Ali – but he swoops in on her time with Cheyne anyway. Paddy doesn’t like it. I’m bored now.

Okay, rose o’clock. Ouch for Cheyne. Apparently their talk was no good. They really set it up for the overly chatty Jules to get dumped though. Love a bit of misdirection from Channel Ten, huh? Big hugs from the gang after their beautiful week together. Fifteen men left!

UNTIL NEXT WEEK, HEARTBREAKERS.