There’s a contestant on the upcoming season of The Bachelor US, Brianna Barnes, who has chosen to put on an incredibly poor Australian accent, when she’s actually a 24-year-old model from Los Angeles.

Yes, she plans to woo Colton Underwood, a man who may or may not be a virgin, by pretending to be foreign – because everybody knows that someone who is not from the Bachelor’s home country makes it to at least the final six every time.

Think I’m making that up? We can use recent Aussie seasons as an example – Dasha Gaivoronski from Russia made it to the top six on Honey Badger‘s season; Olena Khamula from the Ukraine came third on Richie Strahan‘s;  as did Florence Moerenhout from the Netherlands on Matty Johnson‘s series, and Elora Murger, born and raised in Tahiti, made it to #4.

Sure, the lads liked these women as people, obviously – we’re not disputing that – but they also love ~foreign chix~ in the same way you froth a series of British men based entirely off their cute accents.

Is this lie going to take her down (under)? #TheBachelor

READ MORE
And Over In The US, The Next 'Bachelor' Star Might Be An Actual Virgin

In the Bachelor promo, Underwood compliments her “nice accent“, and asks where she’s from – and technically her answer isn’t a lie: “The accent is Australian. I was hoping that you’re kinda a sucker for accents.“

HE LOVES IT!!! What a genius strategy after all.

“I’m not really Australian but you have to do what you can to stand out,” she admits to camera.

Fuck I want to see this so badly because I think the reveal could be GLORIOUS. Especially if it’s milked for all it’s worth like in Unreal.

Here are a few totally unsupported theories about wtf is going on here:

What else do we know about Bri? Apparently she’s scared of farting too loudly on dates, likes it when boys compliment her outfit, plays soccer and watches hockey, and is one of those outdoors-y people who likes camping and hiking and snowboarding, which I’ve concluded is a lie to make Underwood, a former athlete, like her.

Got to work with @malloriemason twice in one week✨ You da best! Also!!! Never been happier with my hair! Thanks a million to the hair wizards @ashleighmariecolor on the color and extensions and @jakebmartin with the cut???????????????? Feeling so grateful to work with genuine and talented people????

The best thing about this whole gambit is that Barnes is unashamedly proud of it, posting the vid on Instagram with the caption “Surprise

” and shouting it out in her Stories. 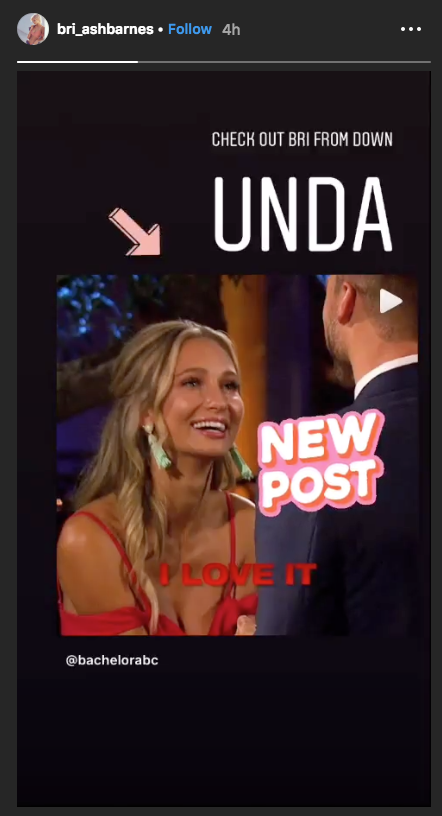 We are definitely not encouraging you to find a way to illegally stream The Bachelor US in order to see how this all goes down, both with Underwood and with the other women. We will not be doing that ourselves. We just wouldn’t!