#FashionsOfFiji: A Wrap Of The Decent / Foultown Style On ‘Bachie’ This Week

What’s that? You thought four fucking nights of hour-plus Bachelor In Paradise episodes, plus faithfully (*glares at you with menace*) reading the P.TV recaps was enough Bachie for you? Hahahahahaha you sweet idiot. No. You need more, more, MORE!

We’ve decided to do a wrap of the best/worst/most fucked up fashion from each week’s Bachelor In Paradise, because frankly, writing you lengthy recaps 4 days a week wasn’t satisfying enough. No, we need more space for our thoughts. We need to fill the entire internet with this shit! 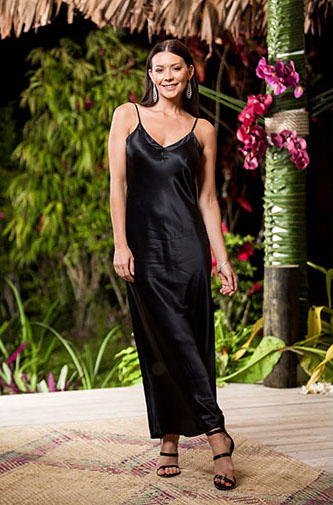 MEL: I actually love this dress BUT can someone give this woman a steam down? That big crease in the middle is fucking with me royally. Also yes I’m aware the whole thing looks like your Nan’s sexy nightie but I can’t help it, I’m here for it.

JOSIE: Look, as someone who was described as one of Fiji’s fuckboys (I think, Brett?) as having “the best chassis” of the cast, I don’t think this does a lot for her. That shape isn’t super flattering on her bod, even just taken in a cm or two along the sides it would have looked 10/10. 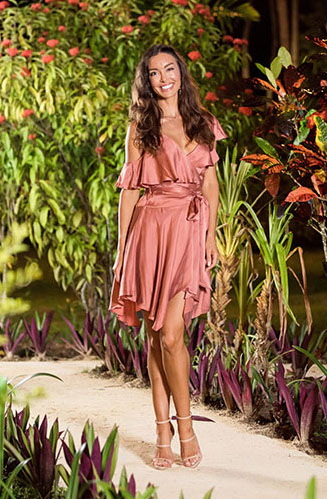 MEL: Laurina had some banger outfits during her short time on the show. I really liked this one, it’s breezy and floaty and goes with her sort of “mildly odd yoga teacher from Sydney now living in Mullimbimby” vibe.

JOSIE: Love this on Laurina. She’s 100% someone who would sell you a rose quartz at the Mullumbimby Markets (infused with her good energies of course) in this dreamy pink number. 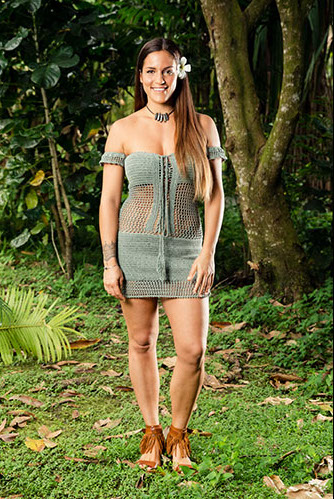 MEL: FUCK NO. I already had a strong go at this knitted monstrosity in the recaps, saying it looks like a badly knitted sock. But I’ll go further – why are you wearing faux Native American Indian sandals, it’s 2018 put them in the bin. Why is there 30cm of your hair that despo needs a trim. Why is any of this happening go back to wardrobe and think about what you’ve done.

JOSIE: Do I have to bring up my Midge Quinlan theory again?! This whole look is absolutely someone from country Australia who has decided to change their name to Elora and adopt an Exotic Tahitian Persona for kicks. Flower? Tick. Mystical stone necklace? Tick. Bohemian sandals? Tick. Dress that looks like something you’d catch fish with in the crystal clear waves of Tahiti? TICK. 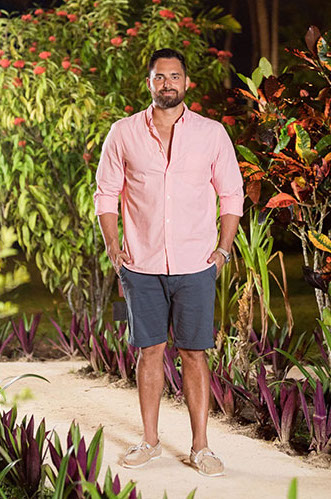 MEL: He’s in my bad books for what he said to Nina, but damn Eden! Salmon is your HUE, dude! This shirt looks great on him.

JOSIE: Not that many blokes can pull off a pink shirt imo, and Eden can (as much as I hate to admit it). Those comfy boater shoes look good too. DAMN YOU EDEN FOR BEING SO STYLISH YET PROBLEMATIC. 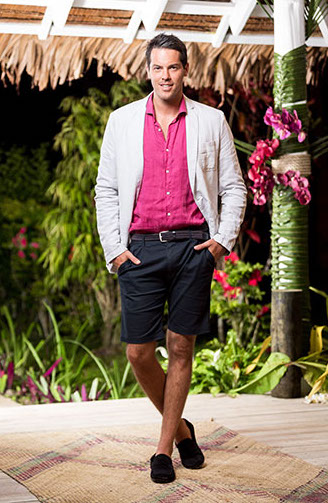 MEL: Fuuuuuck I mean I just hate Jake with the fire of a thousand suns. I don’t care if he’s *currently* loved up with Megan, he will soon be confronted with some new babe and be unable to contain his extreme levels of fuckboyery. We all know it. So my hatred is probably influencing this – Jake, you look like an extra in the film clip to ‘Macarena’. Take off that shirt and it’s 440C in Fiji, lose the linen blazer you giant goober.

JOSIE: You know I hate Jake literally more than anything else in the entire world, like just his face fills me with blind rage. But I’m not biased, I mean we both just gave Eden props for that cute outfit even though he said some probbo things. But Jake’s outfit just absolutely sucks so much shit. I HATE those black slipper-shoes he skulks around in, and I don’t think any of those colours go together at all.It looks like he picked everything up from the messy corner in his room like “this’ll do!”. 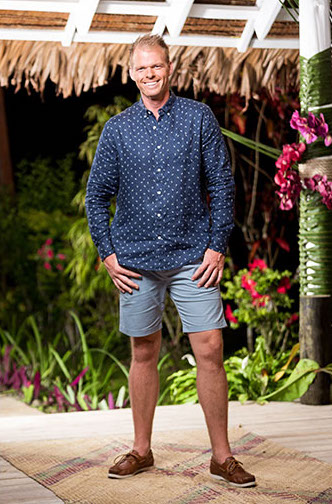 MEL: This is proooobably the least red and most slick I’ve seen Jarrod on this show? One – his shirt is nice. Two – his shorts are real shorts. 3 – he has proper shoes on. Good job, stylist person. Especially with the green concealer to hide his red bonce.

JOSIE: You know what I’m vibing on here? The zesty pose. Jarrod literally has never had so much swagger in his life. He’s working this look. 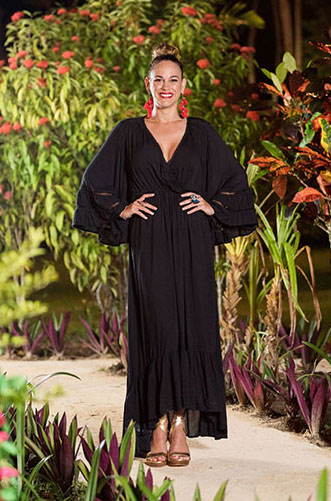 MEL: Like, RIP Nina but also this outfit was FIRE. Great dress, excellent earrings, she looked like Khloe Kardashian but with Kim’s style vibe. 100/10. And this is huge bc I fucking hated Nina.

JOSIE: Love this after-5 Tahitian vibe but I think black is a biiiit of a downer? I would have like to see this in another hue, or a floral print. You’re young and gorgeous Nina, WORK IT. 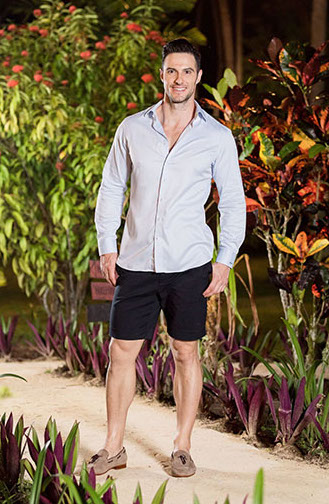 MEL: Good lord, Daniel was terrible and his fashion was terrible too. This looks like “corporate man gets stuck in the wilderness and must cut his pants into shorts to survive”. Why is his shirt so businessy? Why are his shoes the way that they are?

JOSIE: It’s like a serious client meeting up top, Sydney to Harbour Yacht Race on the bottom. Decide what event you’re going to Daniel and commit to it, FFS. 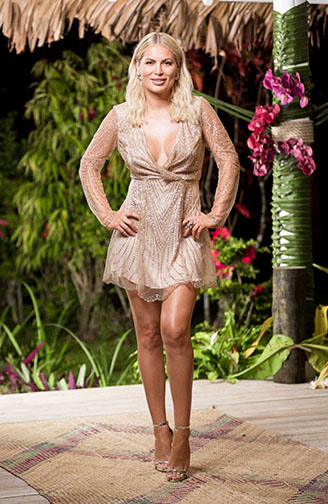 MEL: I don’t entirely care for this dress but I also don’t hate it. It’s a bit too ~in the cluuurb, we all fam~ for me but I gotta say, Keira’s nailed the management of the Fiji frizzy hair curse – just put a shitload of wet-look gel in there and go for the just outta the water vibe. Nailed it.

JOSIE: I was actually loving this outfit sick on Keira but I kinda dig her always-slightly-inappropriate-for-the-occasion vibe? Put her next to Nina and Lisa in their boring black and she just pops, y’know? If I was a guy I’d chuck an entire bush of roses at her. Love your work, doll. 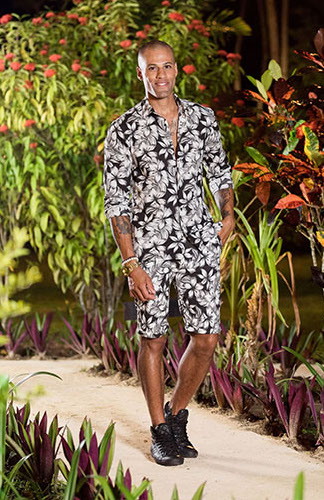 MEL: WHAT THE FUCK WAS THIS. No words. Okay, some words – I bet three birds shat on him thinking he was some shrubbery.

JOSIE: Look, I’m going to go out on a limb here and say I don’t necessarily hate the outfit – it would work on someone quirky and kooky like Sam, for example – but Grant is literally as interesting as that pile of sand he’s standing on. You need to have the personality to rock this look. It’s that whole thing of he’s not wearing the outfit, it’s wearing him. 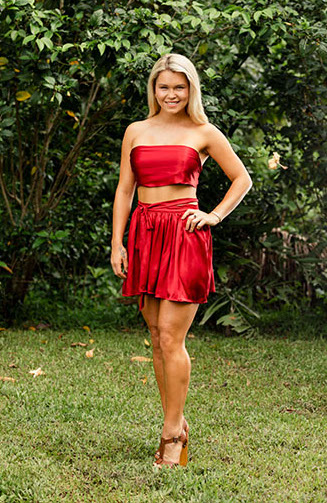 MEL: I’ve said it before and I’ll say it again – did Simone buy a roll of discount satin from Spotlight and fashion it into an ill-fitting wrap skirt and boob tube. 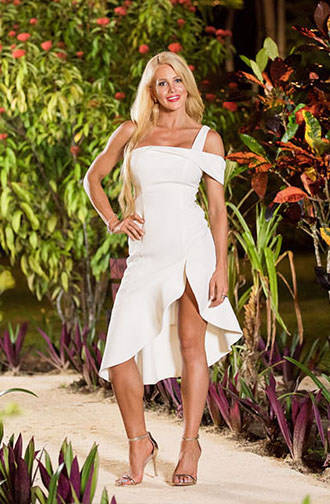 MEL: I don’t hate this actually – she’s standing like a robot and her face is rivalling Michael’s for lack of expression, but the shape is pretty and it suits her.

JOSIE: Frothing this. It’s so fresh and tropical without being covered with, like, frangipanis. It is super flattering for her shape (take notes, Lisa) and the colour really stands out (again Lisa, take notes). 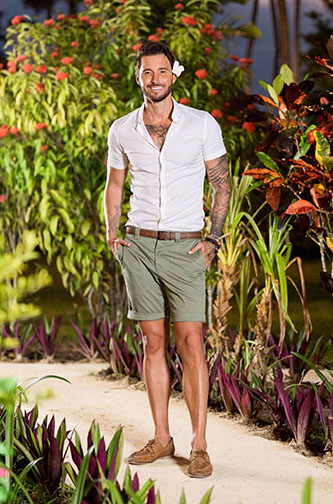 MEL: Good looooooord I swear he is shopping at like, Pavement – you know? It’s the Cotton On teens store. He must be. And buying XXS.

JOSIE: I have made my thoughts abundantly clear on this topic. Michael clearly has a condition where he looks in the mirror and believes he has the body of a 14-year-old boy, so shops accordingly. Everything is SO TIGHT. Like, he cannot even straighten up because the miniscule shirt is dragging his shoulders down. I do love the colours and everything but for crying out loud man, SIZE UP.