Here’s A Lil’ Look At The ‘Avatar’ Sequels, Which I’m Sure You’re All Very Excited For

Avatar 2, 3, 4, 5 – however many there are – is lost on me. It’s utterly bizarre because I remember just how big that movie was in 2009, and I can only guess how big it’ll be when No. 2 eventually rolls around. But it’s been a decade since the film first came out, and I just… don’t feel much for it any more. So here’s me trying to give a shit. Happy Hump Day.

Taking to Twitter, Avatar / James Cameron released a couple of concept art pictures from the sequels – the first sequel, and I can’t stress this enough, doesn’t come out until December, 2021.

“In the #Avatar sequels, you won’t just return to Pandora – you’ll explore new parts of the world,” the account tweeted with four pictures.

In the #Avatar sequels, you won’t just return to Pandora — you’ll explore new parts of the world.

Check out these brand new concept art pieces for a sneak peek at what’s to come. pic.twitter.com/bfZPWVa7XZ

I’m going to assume this is Sam Worthington‘s character Jake Scully and Zoe Saldana (Neytiri) being cute as they overlook Fiji.

This setup looks weirdly familiar, and I don’t know if it’s because I literally just re-watched Avatar the other day (it’s on Disney+) and there was a similar scene, or because there are a dozen versions of it in other films. Either way, still nice to look at.

I did like those flying things [checks Google] mountain banshees! 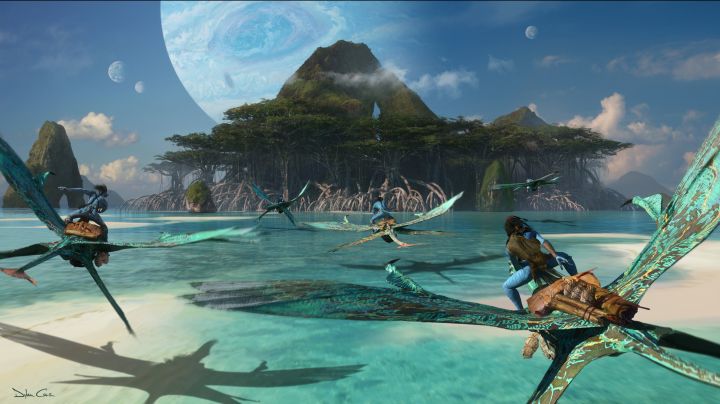 And finally, a little sneak peek at some new creatures. Getting mad Land Before Time vibes for some reason – probably because I also just rewatched those childhood faves. But anyway, yay new creatures!

Okay, I clicked on the franchise’s official website – “Pandoran Research Foundation” – and I suddenly care about the sequels again because light of my life Michelle Yeoh has joined the cast. Also, Jemaine Clement. Two big bloody ticks in my opinion. We brought you news about Clement last year, but I’m only just finding out about Yeoh this second. Oops.

Yeoh will portray a scientist named Dr. Karina Mogue and Clement will play marine biologist Dr. Garvin. I would consider my pickle tickled at this point but woof, the release dates.

Marvel v Avatar though, here for it.

READ MORE
Timothée Chalamet, Patron Saint Of My Heart, Is In Talks To Play Bob Dylan In A Biopic