There’s something so cringey and car crash-adjacent about seeing marketing campaigns go horribly wrong, especially when the folks behind it had the best of intentions, I’m sure, but their idea just went down like a lead balloon. In an ad campaign to support the Blues in the State of Origin, Tooheys offered four of the many Hollywood stars currently in Australia a free slab of grog, only they forgot that one of the chosen celebs (honorary Aussie Zac Efron) is a recovering alcoholic.

In the ad, aimed at Zac Efron, Matt Damon, Mark Wahlberg and Chris Hemsworth, Tooheys asked the blokes to show their support for the Blues in exchange for a free carton of beer, as each of them are currently in NSW.

The ad has since been removed and a Tooheys spokesperson has issued the following statement:

Yesterday we shared what was intended to be a light-hearted message to encourage some of our resident Hollywood celebrities to back the Blues in the upcoming State of Origin series. We understand that it missed the mark and sincerely apologise for any offence or upset caused.

The video, which can be found here, features Parramatta Eels star Nathan Hindmarsh dressed in Tooheys New gear, where he says: “It’s time to show our newest New South Welshmen how to be true blue.

“I’m talking to you Mark Wahlberg, Zac Efron and Matt Damon – you Hollywood A-listers who have been calling New South Wales home for a while.

“There is something that comes with living in true blue territory and that’s backing it’s Origin team, the mighty New South Wales Blues.”

Hindmarsh also reached out to “Victorian ring-in” Chris Hemsworth, who lives in Byron Bay with his wife Elsa Pataky and their kiddos.

In the clip, Hindmarsh carries four cases of grog, each containing the last name of one of the aforementioned famous blokes: 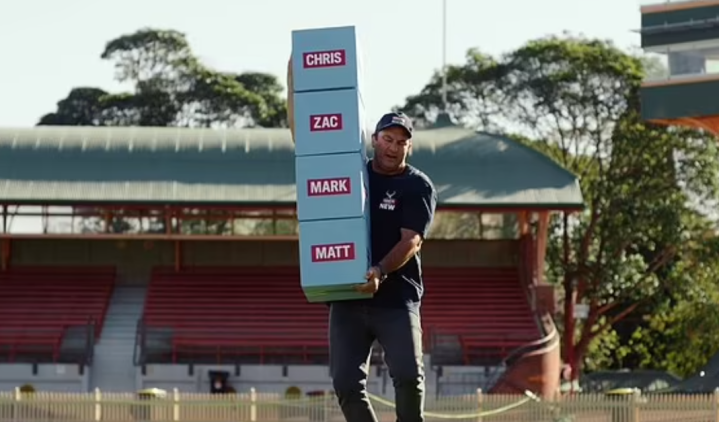 Yeah, not a great look, especially considering Zac Efron has been very open about his battle with alcohol addiction.

Speaking to Elle magazine, he once described alcohol as a “social lubricant” but that over time, “the only things I would look forward to was free time on the weekends and dreaded the start of a new week,” which is when he “knew something was wrong.”

He subsequently spent time in rehab in 2013 to treat his addiction and now lives an alcohol-free lifestyle, so being offered free alcohol is not a good idea, aye.