After 37 fabulous years on television, last night we bid farewell to the residents of Ramsay Street as Neighbours came to an end.

For a show that’s had all kinds of bonkers storylines from plane crashes to hurricanes, naturally things had to end on an equally ridiculous note, right? Several of them, in fact.

Here’s all the silly shit that happened in the finale.

Neighbours has hosted many TV weddings over the years but Toadie’s (Ryan Moloney) wedding in the finale might just be the weirdest one.

The bloke got hitched in purple converse and legit ran down the aisle. It was hysterical.

And his bride’s fit was equally hideous:

Brief honourable mention for what has to be one of the worst wedding dresses of all time (this is Toadie’s bride) pic.twitter.com/6PXQ5KI7GB

Here’s a slice of that fascinating moment in history:

Even a tornado hitting a little Melbourne cul de sac is more believable than that one.

READ MORE
The Neighbours Finale Is Over And Toadie's Crying, The Internet's Crying, We’re All Crying

Beth and Flick bump into each other

Since Natalie Imbruglia and Holly Valance both now live in London, they filmed their scene together but did not physically return to Ramsay Street for the send off.

The thing is though, since their characters have never met, the writers had to try and find a natural way to weave their storylines together.

At least they *tried* to find a natural way but failed miserably.

In the scene, Imbruglia’s character Beth is FaceTiming her fam from a park bench when Valance’s character Flick just ~happens~ to overhear the convo and joins in.

Then all of a sudden they’re getting on the piss and talking to the folks from their old street together.

There were legit ghosts

And finally, soap operas have always blurred the line between fantasy and reality and the final episode was no different.

The ghosts of Madge Bishop (Anne Charleston) and Doug Willis (Terence Donovan) haunted the Neighbours finale, prompting poor Harold (Ian Smith) to lose control of his garden hose (and no, that’s not an innuendo). 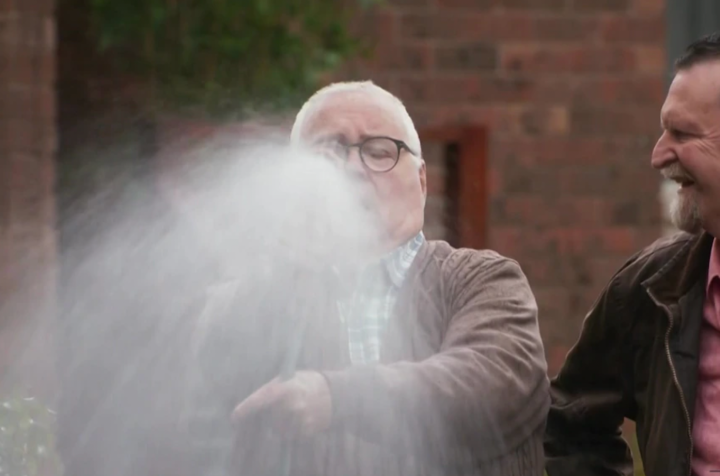 The final episode of Neighbours is now airing on 10Play if you wanna suss the madness.

Farewell to an icon.