Wentworth Miller Details Suicidal Past In Shutdown Of Fat-Shaming Meme

In the early days of mass-interneting – so, let’s say 2009 – memes were fun, hilarious, and absolutely disengaged with the real life people they parodied. (They were also not yet discovered by brands trying to sell you a more expensive washing detergent, but that’s neither here nor there.)

Fast forward to 2015/16, and barely a month goes by where we don’t hear about the grown-up, IRL people behind memes: Bad Luck Brian was a joke, Success Kid used his virility to raise money for his dad’s kidney transplant, only this week has the subject of a 2010 ‘you dun goofed’ meme spoken out how it badly affected their life (‘their’ is Damien Leonhardt‘s preferred pronoun).

Which brings us to Wentworth Miller, Hollywood actor and subject of a meme The LAD Bible shared to their 11.8 million Facebook followers. 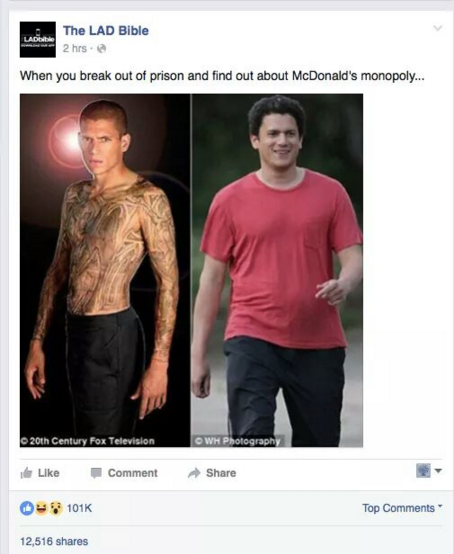 The meme – which has since been deleted – was circulated far and fkn wide, and eventually crossed paths with the IRL person in the photos, a.k.a. Miller himself, who had a few choice words to say about a quick ‘he got fat’ gag.

“Today I found myself the subject of an internet meme. Not for the first time.

“This one, however, stands out from the rest.

In 2010, semi-retired from acting, I was keeping a low-profile for a number of reasons.

First and foremost, I was suicidal.

This is a subject I’ve since written about, spoken about, shared about.

But at the time I suffered in silence. As so many do. The extent of my struggle is known to very, very few.

Ashamed and in pain, I considered myself damaged goods. And the voices in my head urged me down the path to self-destruction. Not for the first time.

I’ve struggled with depression since childhood. It’s a battle that’s cost me time, opportunities, relationships, and a thousand sleepless nights.

“In 2010, at the lowest point in my adult life, I was looking everywhere for relief/comfort/distraction. And I turned to food. It could have been anything. Drugs. Alcohol. Sex. But eating became the one thing I could look forward to. Count on to get me through. There were stretches when the highlight of my week was a favourite meal and a new episode of TOP CHEF. Sometimes that was enough. Had to be.”

You can read the rest of his post below. Meanwhile, it looks like The LAD Bible is shutting up shop in this one, having deleted both the original post and comments demanding they apologise. ‘Course.

Today I found myself the subject of an Internet meme. Not for the first time. This one, however, stands out from the…