Behold, A Pile Of Thoroughly Underrated Simpsons Gags That Really Loosens My Juice

I could quite literally sit here all day and rattle off endless quotes and gags from The Simpsons, thanks largely to the cumulative effects of spending ages 12-23 watching Fox 8’s Super Simpsons Weekend broadcasts over and over and over. But I’ll have a hard time justifying that as “a proper use of company time” or whatever.

While it’s easy enough to put out an article of the best Simpsons episodes of all time, that’s been done and done and done a million times over already. So instead, I’m dedicating several hours this glorious Friday to one of the not-so-quiet joys of The Simpsons: The throwaway lines, sight gags, and underrated jokes that often get buried or trumped by far more famous lines.

Some of these take up all of 10 seconds in an episode and exist purely for the sake of a quick laugh, but I love them nonetheless.

A pair of caveats before we begin here: This is by no means an exhaustive collection, and it’s largely from the “golden era” spanning seasons 4 through about 9 or 10.”

That said, here we bloody go!

The absolute king of complete throwaway Simpsons gags. The episode in which Bart develops a staggering crush on Laura Powers – the older next door neighbour kid – is derailed entirely for 10 glorious seconds purely because the “Sometimes I think you WANT to fail”/”Shut up, just shut UP” line is so goddamned good.

Similarly, just before Homer joins the Movementarians cult we take a quick second to have a good laugh at the fact that Michael Crichton and Stephen King both built giant houses on the backs of weary travellers dropping $50 in an airport on literally anything that won’t bore them completely to tears, as well as the fact that Hans Moleman be a wrinkly blind bitch.

After seeing this for the first time, every hat I owned that did not have a clock in it became instantly redundant. And I owned a lot of hats, so that was a big pill to swallow.

It’s insane, bordering on inhumane and illegal, that “You mean there’s a better way??” and/or “IT’S WHISPER QUIET” aren’t mentioned more frequently in Best Simpsons Lines Of All Time discussions. 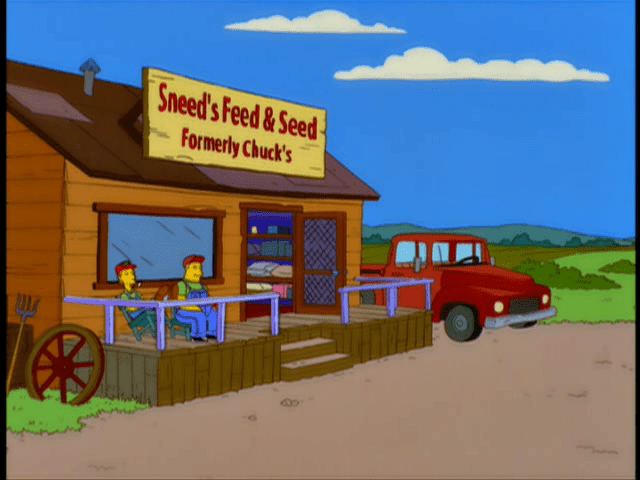 It’s been brought up reasonably often in articles like this one, but this truly is the pinnacle of sneaky Simpsons sight gags. One of the thousands of ways the show’s writers managed to sneak secret swears into the show while paralysing network censors. See also: the “Springfield Heights Institute of Technology.”

There could be an entirely separate article just for Mr Burns, but him justifying abject murder by either forgetting or not knowing that his futuristic-sounding “amnesia ray” is just a regular ass gun is some top shelf quality gear.

One of those instances where the show wore a reference directly on its sleeve, the already-reference packed Homer the Vigilante decided to dedicate its entire ending sequence to aping It’s A Mad, Mad, Mad, Mad World because fuck it, why the hell not.

I dunno man, something about a University Dean hearing a dull thud behind him and immediately figuring out it’s a fainting pig bloody kills me every time. How many fainting pigs has he heard before then? Why is he able to immediately identify both the animal and the malady? It’s crazy, CRAZY! 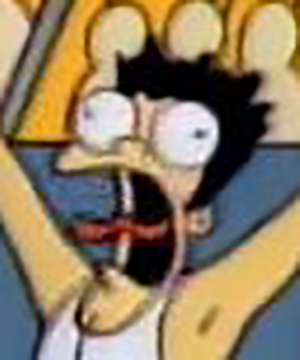 THE ESCALATOR TO NOWHERE
Season 4, Episode 12 – ‘Marge vs the Monorail’

There’s only one negative knock on this otherwise-stunning gag, and that’s that they didn’t dub the muted “AHH!” sounds throughout the entire credits sequence that followed. Can’t win all your battles against the network, I guess.

Am I strongly opposed to Proposition 305? Ah… you bet I am.

Dr. Clownius demands quality craft service on his film sets, and he demands it now. No cost cutting!

Through sheer dumb luck alone Homer should’ve been an accidental millionaire about a thousand times over, and through even dumber luck he isn’t. Side-note: What kind of treasure trove of a house is Mrs. Glick sitting on? Invaluable cultural artefacts, $90 candy dishes. Insanity!

There’s absolutely no questioning the fact that Aurora Borealis is the greatest Shit Explanation joke The Simpsons ever wrote, but my god is this ever a close second. Kirk Van Houten getting his arm sliced clean off afterwards is the icing on a Hall of Fame cake.

You all almost certainly remember the Ralph Wiggum-crying-turning-the-knob-to-no moment, but what gets glossed over far too often is the fact that it’s immediately preceded by an irate Roger Meyers Jr screaming “That’s why you’re still kids, ’cause you’re stupid!” through a one-way mirror, which is so bullshit funny I may actually wee.

HATS OFF TO HANUKKAH
Season 4, Episode 2 – ‘A Streetcar Named Marge’

Jon Lovitz is easily on the Mount Rushmore of greatest Simpsons guest stars, along with Phil Hartman, Marcia Wallace, and Albert Brooks. And while he’s more readily associated with Artie Ziff or Jay Sherman, his turn as oppressive Streetcar director Llewellyn Sinclair is a secret gem. “I have directed three plays in my career and I have had three heart attacks. That’s how much I care, I’m planning for a fourth.” Molte bloody bene.

SORRY IT’S NOT IN PACKAGES
Season 8, Episode 2 – ‘You Only Move Twice’

Somewhere in Channel Ten’s storage warehouse there’s a pile of boxes full of angry letters I wrote them because they’d always cut this clearly perfect gag out of the Hank Scorpio episode every time they aired it. Utterly inexplicable decision. How’s Dan Castellaneta’s delivery on that final “ehhhhhhhh……… no”? Give him a Lifetime Achievement Emmy just for that.

YOU HAVE 30 MINUTES TO MOVE YOUR CUBE
Season 7, Episode 17 – ‘Homer the Smithers’

I simply could not choose between this line and “What are my options?”/”Well, you can either get up or go back to sleep”/”I…… believe I’ll get up.” But this one got the nod via coin toss. The fates have decided, and the car cube wins.

READ MORE
Behold, The Banned Shows I Watched As A Kid And How They Warped My Psyche