It seems like Bachelorette/Bachelor stars are taking a leaf out of the book of TikTok stars and are all moving in together, the latest being ex-Bachelorette contestant Trent Cray (who was apparently on the show) and has moved from Perth into his new Bondi cesspool of ex-Bach contestants.

Some cheeky pap pics from The Daily Mail show Shannon Karaka and Adam ‘Rock Boy’ Todd greeting their new housemate at Sydney airport today. The three men looked super happy about being reunited and living in their very own Bachelor mansion.

They also did this weird photoshoot with The Wash in their backyard (and yes we get it, you lift).

Other members of this new Bondi clique are Samuel Minkin, Nick Chamberlain, Bella Varelis and Bec Cvilikas (among others). However, the award for the best Bach roommates go to Niranga Amarasinghe and Jamie Doran, who are also my all-time favourite tea spillers. 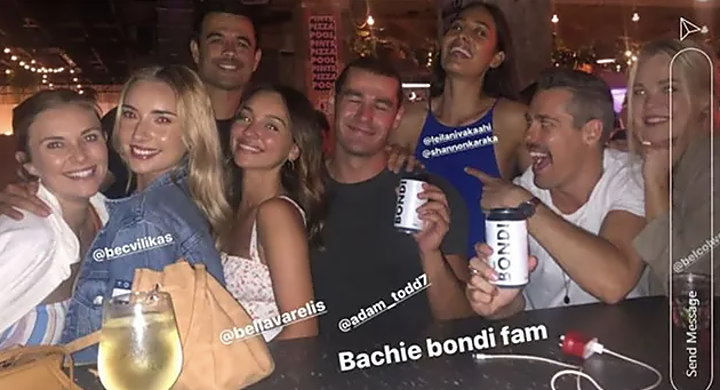 It seems like once you go on The Bachelor or Bachelorette, you keep to the same circles, and inevitably everyone ends up finding out your business. Last week, Niranga went onto the So Dramatic! podcast and unleashed all the hot-goss about the likes of Frazer Neate, Elly Miles and Timm Hanly.

Of course, not too long afterwards shit hit the fan and Timm came for the throats of journos and So Dramatic! host Megan Pustetto. Although, he simultaneously put his foot in it and ended up confessing to ‘coaching’ Frazer on how to get far on the show.

“I’ve got a confession…” he wrote on an Instagram story.

“I did coach Frazer Neate. Coached him how to deal with bullies and social media trolls and to stay away from journos who are going to use him for clicks to benefit them.

“If you can warn someone of obstacles on a path you have already walked, why wouldn’t [you help] a brother out like anyone would? I will continue to coach where I can with people going through the crazy ride.”

The only thing I have left to say about the Bach fam moving in together is, like attracts like.