As always, the mag has delivered a sizzling assortment of super steamy spreads, with the likes of Myla Dalbesio, Jasmyn Wilkins and Eugenie Bouchard stripping down to nothing but togs and some smize:

My heart is so full today ⚡️❤️ Excited to share the first look at the @si_swimsuit edition 2018 as I’m en route to NYC to celebrate the launch . This milestone in my career has been an absolute dream come true and I’ve worked so hard to get here. Also, MAJOR congratulations in order to the stunning cover model @danielle_herrington_ who is representing SI and especially all women of color so beautifully ????????❤️ Thank you to my family, friends, agents and the entire Sports Illustrated team for believing in me . Link in my bio for the full gallery and don’t forget to purchase the issue on newsstands NATIONWIDE tomorrow! #SI #SiSwim @sportsillustrated @mj_day @nextmodelsmia @onemanagement @mpmanagementlosangeles @mpmanagementchicago @directionsusa @1month_tolift

As glamorous as the photos appear, the process of capturing them isn’t necessarily so. 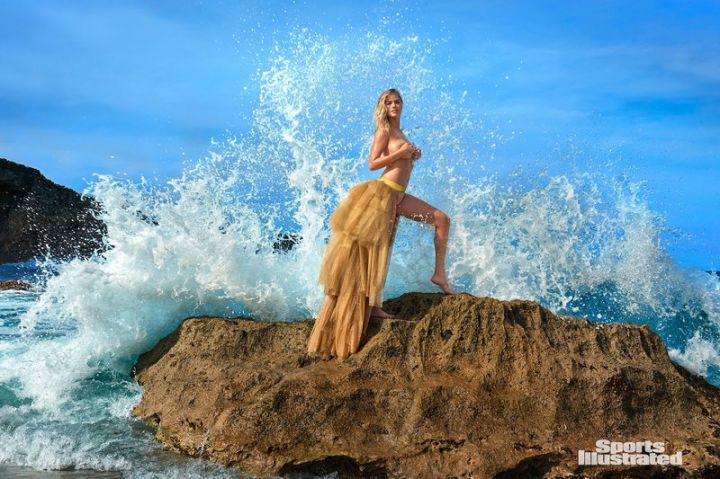 Upton appears fierce and yet at one with nature, perched majestically upon a rock in the gorgeous, turquoise waters of Aruba.

In reality, the sea had other ideas, and poor Upton went positively A over T into the swell below:

“I really saw the vision for the photo, but as I climbed on the rock I did look down and was like ‘this is going to end badly,'” Upton told SI after the incident. “Looking back, that probably should have been a moment when we photoshopped me on there.”

Thankfully, she was unharmed and supposedly resurfaced with a big smile on her face. We bet…

You can watch the full ocean-based ownage here: