Your boyfriend and Zendaya’s — king Tom Holland — is serving some absolute butter churning realness and I for one am loving it.

Tom Holland was pictured with fans in New York  sporting a truly wild haircut. The pics were tweeted, and then deleted, by Pop Base. 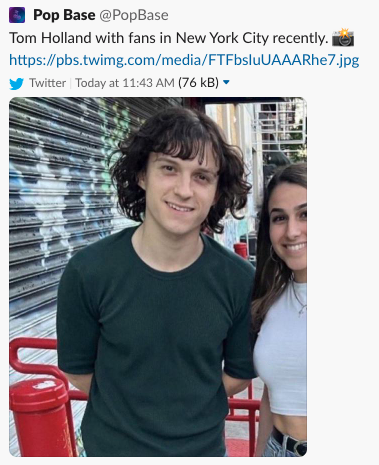 The pics were shared by other Twitter users too. No my friends, it is not photoshop.

Honestly I quite like Tom Holland in his bisexual bob era. He looks like he’s part of an LGBTQIA+ sharehouse in Newtown which has a blanket ban on living with earth signs.

it’s not unfortunately we got another angle 🙁 pic.twitter.com/38QzMDV915

Plus I always respect a man experimenting with his look, even when the look is giving berries and cream. But apparently the bay-ang of it all is not, in fact, for his own personal aesthetic exploration.

The hair is for a new Apple+ show called The Crowded Room. Just Jared published photos of Tom Holland on set with the same hairstyle in April of 2022.

READ MORE
Just Gonna Say It: Josh Hutcherson Was The Tom Holland Of His Time

For context, The Crowded Room is set in the 1970s even though Tom’s gorgeous gorgeous curls are giving a bit more 1270s.

He’ll be playing Billy Milligan. Milligan was the first person to be acquitted of a major crime because of their dissociative identity disorder. Milligan’s case became the subject of a famous biography by Daniel Keyes called The Minds of Billy Milligan.

So like — a very valid reason to be sporting a bowl cut there.

I reckon he should keep it for the next Spider-Man film TBH.

Maybe there can be another Heavenly Bodies-themed Met Gala? Zendaya can re-wear her Joan of Arc costume and Tom Holland could be her strapping page boy.

Or style the hair with some cute little butterfly clips? I’d be absolutely into it.

Unfortunately these pictures have re-instilled my quarantine desire to try and cut my own curtain bangs. Call that the ultimate Tom Holland effect.