Guy Sebastian has publicly clarified comments he made about how much control The Voice producers have on which singers the coaches select during the auditions.

The singer recently told Yahoo! that those lil red books that you see the coaches referring to contain notes from producers on who they should turn their chairs for.

“This season we’ve got unlimited chair turns so sometimes if there’s one coach that goes in for a chair turn, to make it more interesting, you may as well go in there and have a crack at pitching,” Guy said, adding that producers might prompt them with a note saying ‘If this is just a one-chair turn, maybe jump in.’

READ MORE
Remember When Guy Sebastian Sung Crazy In Love At The End Of Season 1 Of Australian Idol?

After the story went bonkers among the Australian media, Guy Sebastian clarified what he meant in the comments section for a story written by Tone Deaf, titled: ‘The Voice judge Guy Sebastian reveals producers tell them when to turn.’

“Only problem is this headline is completely false,” he retorted on Facebook.

“We are only given reminders of the different format changes. For example, this year there are unlimited chair turns instead of 12 spots, which means if we are on the fence we don’t need to be selective,” he said.

“Obviously it’s way better to give the artist a choice and to battle it out with another coach than to default to only one coach who turns.” 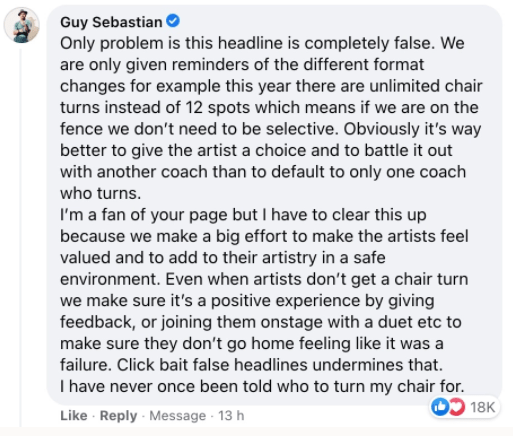 Do with that info what you will!

The Voice is currently airing on Seven. Guy Sebastian is a coach alongside Rita Ora, Jessica Mauboy and Keith Urban.