It’s Grand Final time! Tonight we find out who from The Voice has been voted as The Voice. After last night’s final performance show, the fates of the four remaining contestants Sarah De Bono, Karise Eden, Rachael Leahcar and Darren Percival have been left in the hands of the television audience. Who has the public chosen? Which performer has sung their way into the hearts of Australia? And why have I started writing in the oeuvre of the voiceover guy on the show?

7:14pm: Eating dinner with my boyfriend 17 minutes before kick off and we’re saying stuff like “It’s the calm before the storm!” and “The excitement in the air is tangible!” and any other phrases used by people who call football games.

7:33pm: I checked the TV guide and this show finishes at 9pm. I wonder what kind of terrible filler they have planned to stretch the evening out till then?

7:35pm: Great news: the assistant coaches Megan Washington and Benji Madden are back for the finale. Please let Benji Madden’s code of silence be over.

7:36pm: More great news: Darren McMullen is finally wearing a black suit that looks black and not purple! Shout out to Gabe The Voice stylist.

7:37pm: Delta is in a chain-covered gold second skin. I’m curious… “She looks like a sexy C3PO” says my boyfriend. “I’m so conflicted… C3PO isn’t sexy.” he whimpers. She does look good in this ludicrous turtleneck sheath!

7:39pm: The first performance of tonight is the four finalists singing “Chains” by Fleetwood Mac. It sounds pretty average. Then the rest of the Top 20 performers come on and join them! No it sounds pretty good. Joel says his heart is warm. Delta references Rachael‘s “magical journey”. You can almost see her nipples tonight. More like Delta BADrem! Am I right! Keith thinks the “collaborative spirit” is “cool”.

7:45pm: The other judges are revealing their nicknames for Seal and they are amazingly spot on: “Mandusa” (half man half Medusa), “Lord Seal” (the posh British Seal), and “Jedi Seal” (wise Seal – a rare one).

7:46pm: Next up Joel and his finalist Sarah are performing a duet. Apparently all the contestants are doing duets with their mentors tonight.

7:50pm: It’s “party central” in the V Room tonight, the biggest time wasting device of the entire show. Team Joel is in there hyping Sarah. Including Laykn. He’s making inappropriate facial expressions. Team Delta is hanging out too, and the young man Benjamin Button (or similar) is wearing the same Cerulean sweater seen on Anne Hathaway in The Devil Wears Prada.

7:53pm: Sarah and Joel are singing a Bruno Mars song I’ve never heard in my life. It’s very dark and moody on stage with blue filters. I’m kind of shocked to say that Sarah’s voice actually pales in comparison to Joel’s. There are fake flames burning around the stage and faux golden rain (fire?) dripping from the ceiling. It’s the ugliest set I think I’ve ever seen. But it was all symbolism. The lyrics of the song were about fire so the stage had fire on it. Get it?

8:01pm: Even though I found the flames completely distracting, Sarah did look like a very sexy anime character in her tulle covered fishtail black dress.

8:02pm: Seal and Karise are singing next. They should be a good match because the tone of their voices are similar. These two are going to sing “Many Rivers To Cross” by Tony Childs.

8:05pm: Seal opens the song in an understated black suit with black shoes – not the red ones we’ve often seen him pair with black. Seal’s voice is a bit ragged and struggling on those high notes. Probably from smoking shitloads of weed every day. Karise sounds great and looks charming in a black dress and several necklaces. She even holds Seal’s hand because she’s a great sport.

8:09pm: There’s another Underbelly coming out? Just saw an ad for something called Underbelly: Badness. “Badness”??? It’s got Anthony LaPaglia’s attractive younger brother in it. Promising…

8:16pm: These two actually sound really good because the harmonies in the song are beautiful. Such an obvious choice though. Especially when another contestant in a different reality singing contest has nailed it in the past (shout out to Anthony Callea!). “Are they singing in a different language?” my boyfriend asks me after they’ve been singing in Italian for at least three minutes.

8:18pm: Darren McMullen just royally screwed up a basic outro to the ad break. The guy is 100 per cent on cocaine tonight.

8:24pm: The next duet will be between bromantic Darren Percival and Keith Urban. Darren’s rocking a chic mauve scarf in rehearsals!

8:25pm: They’re singing a Keith Urban song – Keith chose his own bloody song? It would be obnoxious for anyone but Keith. It’s weird seeing Darren perform without a suit on. He’s opted for a hooded waterproof-looking leather jacket instead. This performance is fine, if a little boring. It’s the kind of song “you had to be there” in order to appreciate.

8:34pm: The V Room is such a bore I’m not commenting on it anymore.

8:39pm: WHAT THE HELL! Barnsy, the real Jimmy Barnes, has just joined them and is shouting along like a champion. It’s a celebration of the voice.

8:42pm: It’s great to see Emma Louise Birdsall singing again, but I can’t figure out if it’s an ad or part of the show or what? ANSWER: It’s a Woolworth’s ad.

8:46pm: Okay guys, the moment of truth is almost here. Joel talks about how much he loves Australia and says how everyone’s a winner tonight. “You’re not running for office mate,” says my boyfriend. You can tell all the judges are emotional about the show ending. Keith thanks Nicole who is back stage right now (!!!!), his kids and the band. He remains the judge I hate the least.

8:50pm: Darren McMullen is now reading out the results from fourth place. It’s Sarah De Bono. She discusses her “journey” over the top of her highlight reel.

8:53pm: Aw good on you Sarah De Bono. She gets ten grand which isn’t too shabby, plus she got hours of hang time with Joel so she’s a winner in the end.

8:54pm: Next the third place goes to… Rachael Leahcar. (No kidding, this is exactly how I’d thought this shit would go down!) She wants people to know her as a performer and not just “the blind girl who can sing”. Now I feel super guilty about calling her “the blind girl” through the entire series. She’ll have an album out before Christmas.

9:03pm: Now we’re down to the last two Darren and Karise. “Let’s take a look at their journeys.” Groan!

9:05pm: Darren is thanking his wife, his family, kids, MAHALIA BARNES, Team Keith and Australia. Bless. I’ll be happy if he wins, although I have a feeling Karise is going to take it out…

9:08pm: Seal is talking about an important part of his job as Karise’s mentor was “getting inside her head”. He got into all of us, one way or another, during this show.

9:15pm: That’s it everyone. It’s over. Congatulations to Karise and thanks everyone for joining me here for the live blogs. I’m Darren McMullen, goodnight Australia. 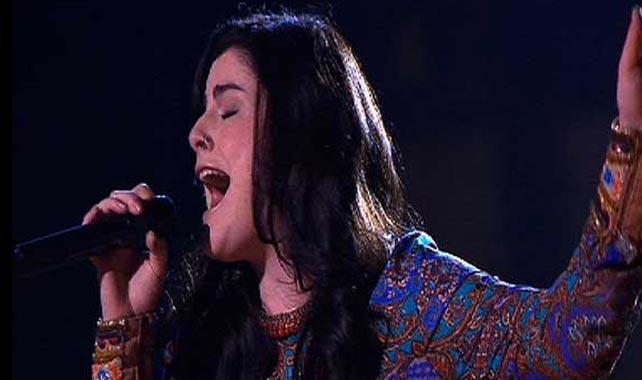