The Top 10 Iconic Modes of Transportation in Pop Culture

Hello there, fellow traveller on Pop Culture Highway 101. Need a ride? Of course you do. I don’t know where I think I’m going with this terrible hitchhiker analogy but I sure as hell know how we’re going to get there (read: together)! Yes, today we’re taking a look back in the Ray-Ban Legendary List rearview mirror at The Top 10 Iconic Modes of Transportation in Pop Culture History all in honour of the lens-maker’s 75th Anniversary.

So far on this road trip we’ve stopped off at Champion Companions who have also doubled as pack mules (Samwise Gamgee), legendary feats of Public Art to transport you to a higher plane and the Fantastic Follicles of a chosen few to put your top down windswept ‘do to shame. We’re almost at the half-way point on this retrospective journey through the annals of pop culture history, so where better to kick things off than with a trip to a galaxy far, far away (sorry!).

It’s the ship that made the Kessel Run in less than twelve parsecs, outran Imperial starships and taught me how to drive defensively. A personal smuggling starship piloted by a rogue captain and an adorable tower of lint, the Millennium Falcon is not only the fastest hunk of junk in the galaxy but also a really good time waiting to happen. Inspiring both the joy of flight and boundless flights of imagination in many thousands of nerds like Joss Whedon – who created an entire TV series inspired by The Falcon, Firefly – she may not look like much, but she’s got it where it counts, kid. Don’t believe me? Cancel all your plans and watch this truly fantastic fanboy super cut mash up of The Falcon and – well, you’ll see. Watch it.

Less than a hundred were made and it only took one to change the course of truant history forever. You’ve never seen a car like this before, not least in French. It is so choice. If you have the means, I highly recommend watching this.

If you don’t yet have your Apparition License you can always throw some of this suspicious powder on the fire and it’ll take you from where you are to where you’d rather be, just as long as you nail the pronunciation. Sadly, floo powder almost definitely didn’t work for Kate Moss at this year’s Closing Ceremony.

A far-reaching fantasy transport concept beloved of everyone from James Franco to Ali G, The Hoverboard’s most famous iteration comes undoubtedly from its turn in the Back To The Future films where it not only made for an excellent chase scene, but an excellent merchandising opportunity. Mattel announced earlier this year that they would recreate a replica pink hoverboard (like the one McFly stole from that reluctant little brat) that will be able to “glide over most surfaces” but won’t work on water. Unless, that is, you have power! The 1:1 replica should go perfectly with your power laces and the entire Nike McFly collection. Does anyone else just feel like watching Sci-Fi movies all weekend?

RYAN GOSLING, THE 1973 CHEVROLET CHEVELLE, OR THE ENTIRE ‘DRIVE’ SOUNDTRACK

Never has a more convincing argument been made for the practice of stunt driving as when Ryan Gosling took to the wheel of this now iconic vehicle. However, I’m finding it hard to separate which one of three things is a more iconic form of transportation: Ryan Gosling (because many people want to ride him), the movie’s Chevrolet Chevelle in which all the titular driving and awesome good times take place, or the throwback soundtrack to the film, which you could argue is just as transportive as the film itself. A real human being, and a really iconic moment for transport in pop culture.

If you thought Karl Lagerfeld’s hoop beach bag for Chanel Spring/Summer 2013 was the storied house’s most ridiculous moment then you’ve obviously forgotten about the Chanel Segway. I’ll preface this by saying no one looks good on a Segway. Not even Stella Tennant, so you know it’s a feat in fug. The select-terrain vehicle comes complete with monochrome Chanel branding, badging and tread on the wheels, steering head and handlebars, and matching quilted leather bag resembling a classic 2.55 clutch. If a Chanel bike costs upwards of $12,00 imagine the cost of this iconic monstrosity? Your dignity perhaps; which, presumably, is priceless. 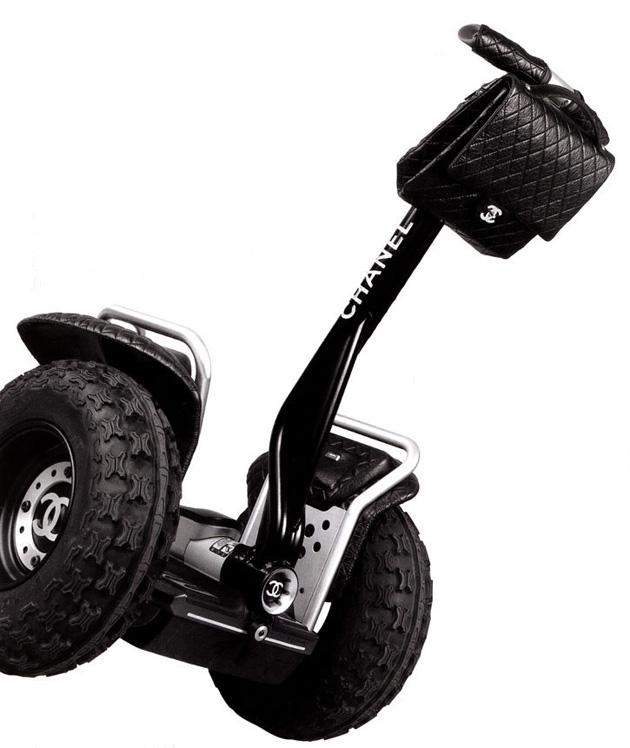 Before Sons of Anarchy but after Dennis Hopper, James Dean and a whole bunch of other culturally relevant examples of the use of motorcycles in pop culture, there was the chopper Bruce Willis stole from Zed in Quentin Tarantino’s Pulp Fiction. According to some impassioned chopper forums that will suck you in, Grace – the vehicle at hand – isn’t technically a ‘chopper’, or her status as such is seriously up for continued debate by lively chopper purists. According to said fanatics, the motorcycle does however have a “FatBob tank, dash & rear fender, air cleaners mounted on both sides of motor and the left appears to be a coil/horn cover.” Technicalities aside, with a name like Grace and Bruce Willis at the helm, it’s still not just a motorcycle, it’s a chopper baby.

Dorothy Gale was transported to the land of Oz somewhere over the rainbow (sorry, again!) courtesy of a really inconsiderate but nonetheless iconic tornado, but I think we can all agree that she learned a lot more from her journey thanks to the last item in our series of our iconic modes of transportation: Elton John’s sexy time shoes, the ruby slippers! Originally belonging to The Wicked Witch Of The East (vintage, so adorable) before Dorothy wrongfully stole them from that much maligned lady with hypochromic anaemia, the ruby slippers caused poor Toto a whole lot of strife and provided the impetus for one of history’s greatest films and the source material for one of my childhood’s most terrifying recurring nightmares (flying monkeys?! Those guards?!). It turns out Dorothy also had the ability to go home at any time via the sequinned slippers, a fact that Glinda the “Good Witch” conveniently omitted from her orientation spiel. Classic Glinda!

See: the last third of The Return Of The King, and The Top 10 Legendary Sidekicks in Pop Culture History. Is there anything this guy can’t do?

Which modes of pop culture transportation did we miss the boat on? A boat maybe? You, and your little dog too, can us know in the comments section below.