The O.C. Might Cop A Reboot With Some Of The OG Cast & I’m Howling ‘Californiaaaaa’ Already

According to a tip-off to Hollywood goss Instagram Deuxmoi, a reboot of The O.C. could be on the cards, and dear producers gods, please reconsider.

Obvs Ryan becomes friends with the Cohens’ teen son, Seth (nerdy teen heartthrob Adam Brody, who frankly has a lot to answer for re: my taste in men) and meets the girl-next-door, Marissa Cooper (Mischa Barton), whose bf, Summer Roberts (Rachel Bilson), is Seth’s childhood crush. Melodrama, romance and indie rock ensues, for three perfect seasons (and one rubbish one). You get it. You know it. You love it.

So why fuck with perfection?

Well, the source reckons that HBO Max will be keen to reboot the popular teen drama if their Gossip Girl remake succeeds.

“If the upcoming GG reboot is a hit, I’d give very strong odds of them pushing for an OC reboot as well,” they wrote.

But, they note, a reboot of The O.C. hasn’t had legs before now because Ben McKenzie isn’t interested in coming back to the show and creator Josh Schwartz “didn’t think it could ‘work’ w/o Ryan in particular”. “[Ben McKenzie] only wants to do ‘serious’ work, and hates L.A,” says the Deuxmoi snitch.

The source posits that The O.C. moved from Hulu to HBO Max last year because HBO execs were “thinking/hoping a reboot could happen”.

Unlike the Gossip Girl remake, the Deuxmoi insider reckons an O.C. reboot would “likely” bring back some of the original characters. “[HBO Max are] also much more willing to do [the reboot] even if only a handful of original castmates sign on again.”

There’s even apparently a “rough sketch” of how the reboot would continue the story by bringing back Adam Brody and Rachel Bilson as Seth and Summer.

“Seth & Summer, more or less happily married in Newport and living in their old ‘hood (actually filmed in Malibu but nvm lol), with their kid(s) – could be one or two – starting out as freshmen at Harbor,” the insider said.

“[T]he original show didn’t shy away from serious issues, and this could be a great way to delve into broader issues of classism (obv a core aspect w/Ryan starting out) and racism (in hindsight the show’s kinda blindingly white, so likely a given that the “new kids” would include quite a few more POC),” the source elaborated.

The intel concluded by pointing out that Adam and Rachel played teens when they were actually in their 20s, so they’re actually the perfect age now to play parents. “[They] could believably play 40ish parents with a 15-year-old(ish) kid.”

Read the full screengrabs below: 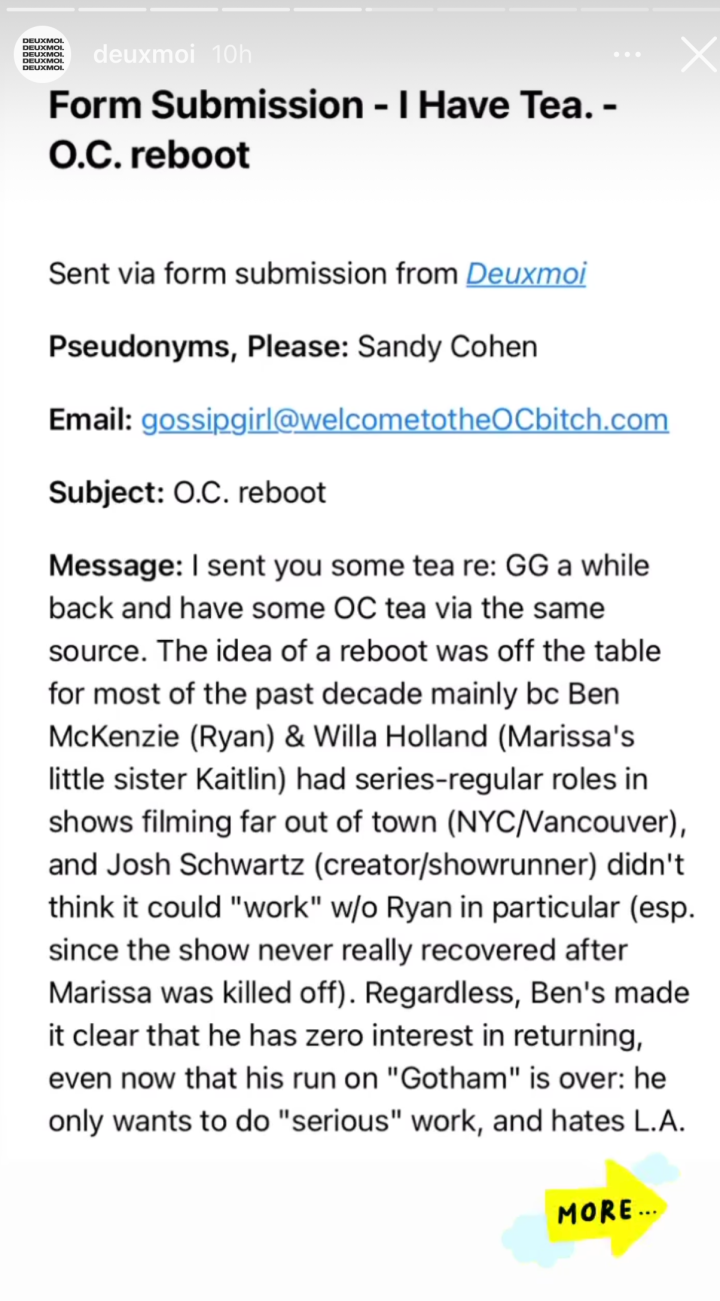 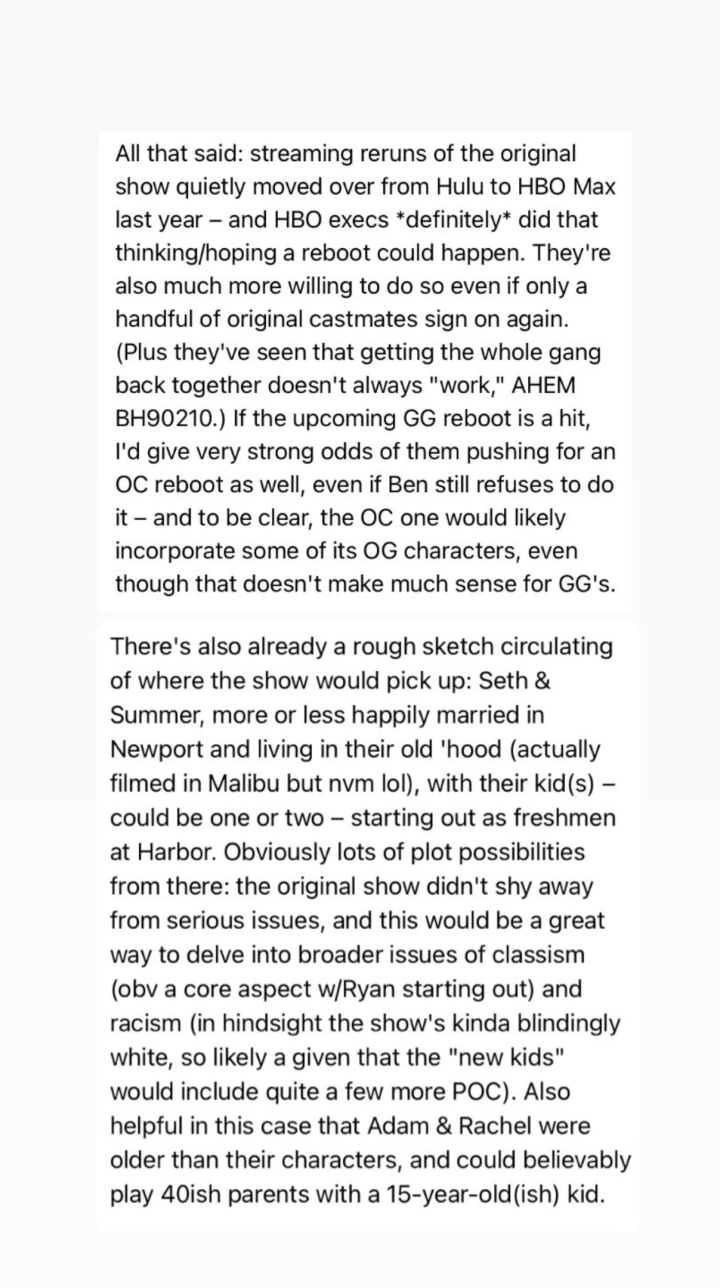 While I’m firmly opposed to an O.C. reboot at this juncture, it would be cool for a teen show to once again showcase indie rock artists to a wider audience (see: Death Cab For Cutie, The Killers, Modest Mouse, etc. playing at The Bait Shop).

Fuck it, maybe I’m convinced, if this show also proves formative to a generations’ taste in music and dorky-ass men. Just don’t ruin something beautiful (seasons one to three).

Y’all can rewatch The O.C. on Stan.