Congratulations, Waleed Aly! The Daily Telegraph spun its Wheel Of Xenophobia in this morning’s news meeting, and the needle landed on your name.

Your prize is a totally nonsensical article detailing 6 reasons you don’t deserve to win a Logie, as written by troll journo Victoria Hannaford.

Here’s a screenshot, just to prove it does it exist. 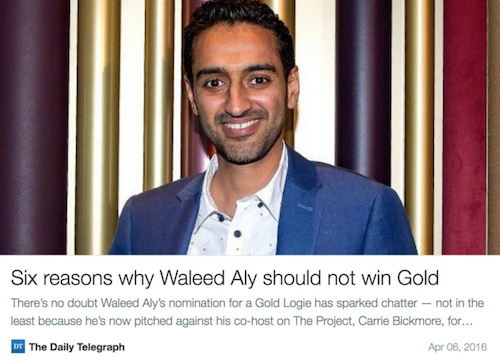 Among the reasons given are:

Whether you like him or not, or value his thoughtful takes on key topics or not, no one can deny Waleed has broken the ethnic glass ceiling on commercial TV in the past 12 months; sure, the ABC and SBS have been offering a diverse viewpoint for years, but it’s bigger a bigger deal than most people think to see some diversity on a commercial network.

But more importantly, and transcending anything to do with race, has been Waleed’s monologues on issues as diverse as domestic violence, negative gearing, Adam Goodes and the Paris attacks.

From racking up millions of views with his ‘ISIL Is Weak’ speech, influencing parliamentary debate and being one of a handful of Australian voices respected on a global scale, the argument that he somehow hasn’t reached the levels worthy of a LOGIE nomination is baseless / sad.

It’s true that Leigh Sales is as worthy for a Gold Logie nod, but let’s not forget the Gold Logie is based on popularity – not ability. If it were the other way around, Home & Away actors probably wouldn’t have got the same look in, hey (except you Ray Meagher, you bloody legend).

Specifically, that “his show isn’t yet the league of breakfast television juggernauts Today and Sunrise“. And yet we looked up the OzTAM 5-city ratings for Monday, April 5, and they were:

* He’s not on social media.

“Rejecting social media is no crime, but how can Aly run a campaign to win without it? I understand anyone’s wish not to be involved with that side of technology, as it can be all consuming, but if used judiciously, it’s just another way to engage with your audiences,” she writes.

The man chooses not to tweet or ‘Gram, GODDAMN HIM TO HELL because he obviously doesn’t give a shit about the hundreds of thousands of Aussies he connects with on TV every night.

PS. Running any sort of ‘campaign’ to win a Logie is v. sad (it’s only funny when Lee Lin Chin does it).

We could go on debasing the rest of the listicle, but we’ll leave that up to you. Read it HERE and gag.

This type of article is written purely to rile people up, and it’s served that purpose well because Twitter be blowin’ up.

Besides making 2015’s most-watched piece of Aussie TV and hosting the same show as last year’s winner, how is Waleed Aly nominated? #Logies

Six Reasons Why This Is A Terrible Article: https://t.co/lKFE5TRvD7

#IStandWithWaleed has even started trending, as people jump to his defence / take the opportunity to take a steaming dump on the Daily Tele’s xenophobic tendencies.

No word from the man himself, though, ‘cos he’s not on social media and lord knows that means he deserves every turd thrown at him.