The Changing Times Of Surf Culture

Sugarmill Surf Emporium is one of 50 venues handpicked by Ray-Ban to be part of their Rare Prints/Rare Places initiative, a unique concept they developed to help their customer discover their city’s best bars, shops and events to celebrate their new range of Rare Print Ray-Bans.

Calling themselves ‘a new surf lifestyle inspired retail collective’, Sugarmill is anything but your conventional surf store. Located in Sydney’s northern beaches, Sugarmill is redefining today’s surf culture; representing a new breed of surfers, artists, musicians and brands who all embrace surfing as a way of life. From boards, to apparel, homewares, furniture, books and artworks, the store reflects the progressive movement towards a surf culture that seems to be much more sophisticated than its predecessors.

Pedestrian caught up with store co-founder Chris, who shares with us the concept behind Sugarmill and how the store reflects a newly defined surf generation – which is probably why it’s been named as one of Ray Ban’s Rare Prints / Rare Places venues.

Tell us about the initial concept behind Sugarmill. We’ve all worked in the industry for many years; we all came from retail and wholesale backgrounds. So I guess we saw an opportunity in the marketplace – but we also saw a need – for community focused surf stores that represented the brands and all the kinds of products that surfers wanted to see in stores nowadays. Stu and I both worked for Insight before we started this, so we really wanted to see stores that represented the brands that were in our opinion (and in the opinion of a lot of others), leading the way in design and taking a different line to what some of the bigger companies were doing.

As a retail space, what would you say is your point of difference? It’s a complete different fit out than what you would see in most traditional surf stores. We had a group of interior designers, design friends and furniture builders design us really unique fixtures and furnishings – we made them all ourselves. Instead of putting up posters of brands on walls we’ve put up artwork by local and international artists that we love and support.

The space is just really unique. We’ve got a coffee machine where we make coffee out of every day; we play rock and roll music from the ’60s and ’70s as opposed to dance music from now. It’s comfortable, it’s warm, it’s inviting. You walk in it’s like almost walking into an inner city bookstore, meets a furniture store, meets a cool clothing boutique… it’s unique in that it doesn’t look anything like any other surf store – or any other kind of retail store – that really exists. 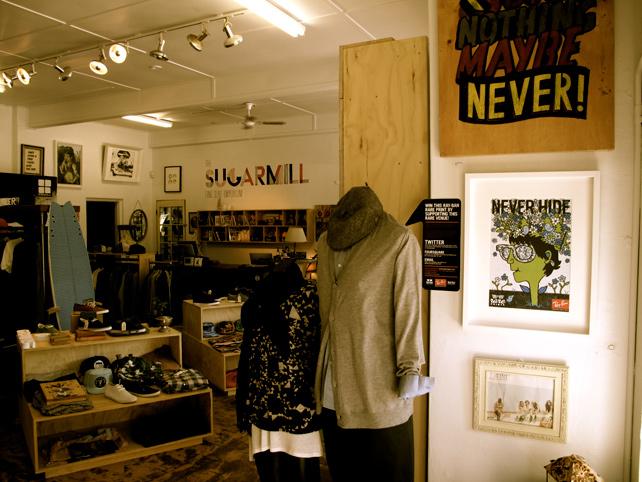 What’s been the response from locals? Amazing! We were really embraced by the surfer community in doing it – taking that step forward away from the traditional surf stores. We were recognised by all our peers, all the other retailers and brands, the industry and the media. The acceptance from the local community has been amazing as well.

We’ve got such a great clientele already, considering we’ve only been open eight months. We also won the Northern Beaches Outstanding New Business of the Year Award a couple of months ago, which we didn’t even know we were nominated for. That was kind of nice, to get accepted by who we would consider as being a more professional-based group of the industry.

How does Sugarmill reflect the northern beaches culture? We represent all the brands that probably don’t get a run in a lot of the big surf stores. They’re all the kinds of brands worn by chicks who love to run around in skimpy bikinis in Avalon, to the cool guys that go to Mona pub on a Friday night, to the kids that kick around in Manly on Saturday nights. I think that the products and the brands and the product categories that we represent are probably more representative of the youth of today and the kind of product that they’re into.

The northern beaches has a real beach culture; crews can walk into the store with bare feet and sand all over them. Really soon we’ll be opening a lifestyle floor, where people can come in and jump on Wi-Fi and hang out, watch DVDS and chill around in the shop, grab a coffee and sit and do work. We represent that beach lifestyle and youth-orientated lifestyle. The northern beaches has also got a really strong art community. There are a lot of really unique surfers and artists that have come from this area, guys like Ozzie Wright through to all the artists from around Manly… we’re representative of what people may consider as a minority, but its definitely a counterculture to traditional surf. 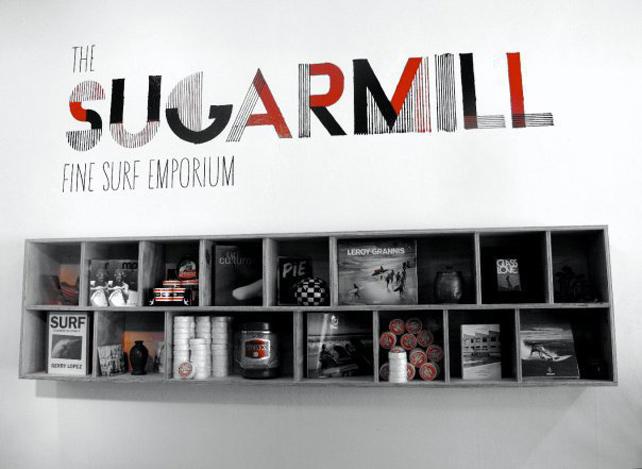 Surfers are just way more diverse now, they look different to how they’ve ever looked; they’re interested in art, music, culture, and a whole array of different things. It’s why we can have a store like this and sell everything from $150 design books through to Pendleton Mexican rugs from the States, to $500 pieces of artwork – and then we’ve got t-shirts and boardshorts as well. The progression of the surfing lifestyle has really changed and I think surfers have become much more sophisticated…

You could win the Ray-Ban Rare Prints artwork from the venue by just tweeting about Sugarmill Surf Emporium to #raybanrare.