Welcome to the red carpet of the 2011 Emmy Awards: the good, the bad and Christina Hendricks’ breasts.

CLAIRE DANES – Oscar de la Renta Claire Danes never looks bad on the red carpet but she does tend to play it safe. For this year’s Emmys she’s chosen a simple strapless column dress, but one that’s been pimped out with sequins and embroidery to keep the look from being too ordinary. There’s nothing particularly extraordinary about this outfit but she still looks hell pretty. 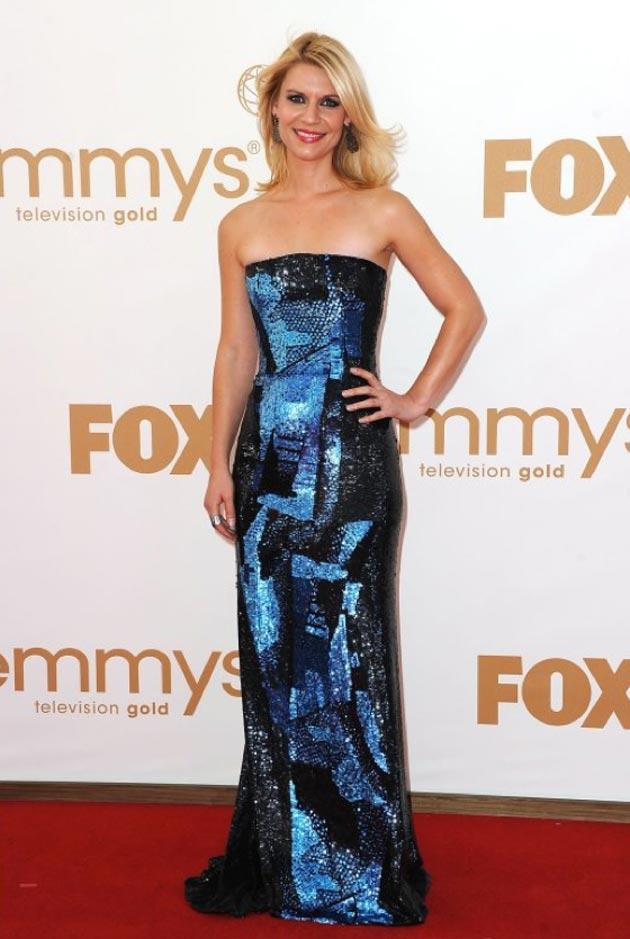 CHRISTINA HENDRICKS – Joanna Johnson There’s no doubt about it: Joanie’s breasts are a God-given miracle that need to be celebrated. However, sometimes her red carpet choices hone in on her chest to the extent that it’s kind of comical, as though she should have a top hat-wearing cartoon character popping out of her cleavage and saying “ah va va va va VOOM!” while wiggling his eyebrows. Thankfully tonight Christina has bestowed us with a more understated look at her milky cans so we can appreciate her smoking hourglass figure. The hot roller hair style is the perfect complement for the ‘Old Hollywood’ vibe. 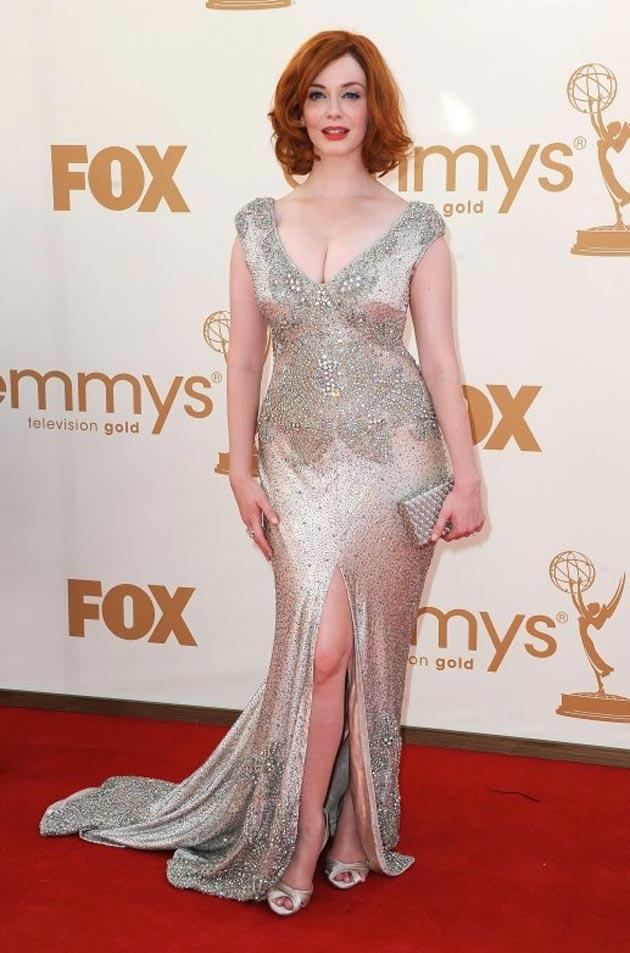 MICHELLE FORBES – designer unknown This multi-faceted actress has an Outstanding Supporting Actress in a Drama Series nomination for her role as a grieving mother in The Killing. She looks pretty sharp in this Morticia Adams-ish strapless black tulle number and a loose up ‘do. And after she scared the shit out of us playing psycho brain Maryann in Season 2 of True Blood, we would not dare say a negative word lest the crazy dilated pupils start happening. 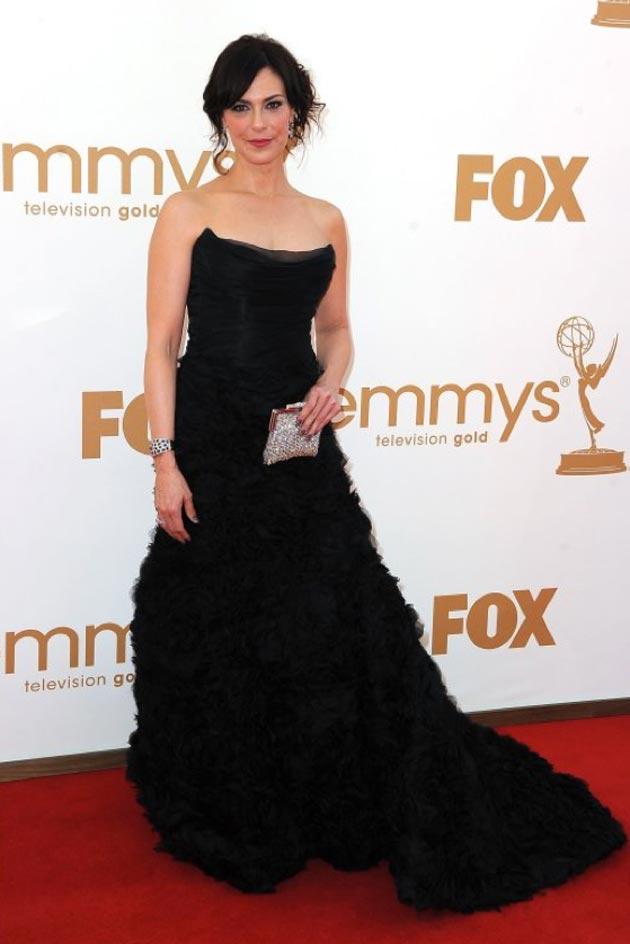 AUBREY PLAZA – Juan Carlos Obando The Parks And Recreation actress is so convincing as deadpan alt-girl April Ludgate I forgot she was a real person who wears things other than cardigans and scowls. She goes the Old Hollywood Glamour route in a white Juan Carlos Obando halter gown and a red lip and looks fantastic. 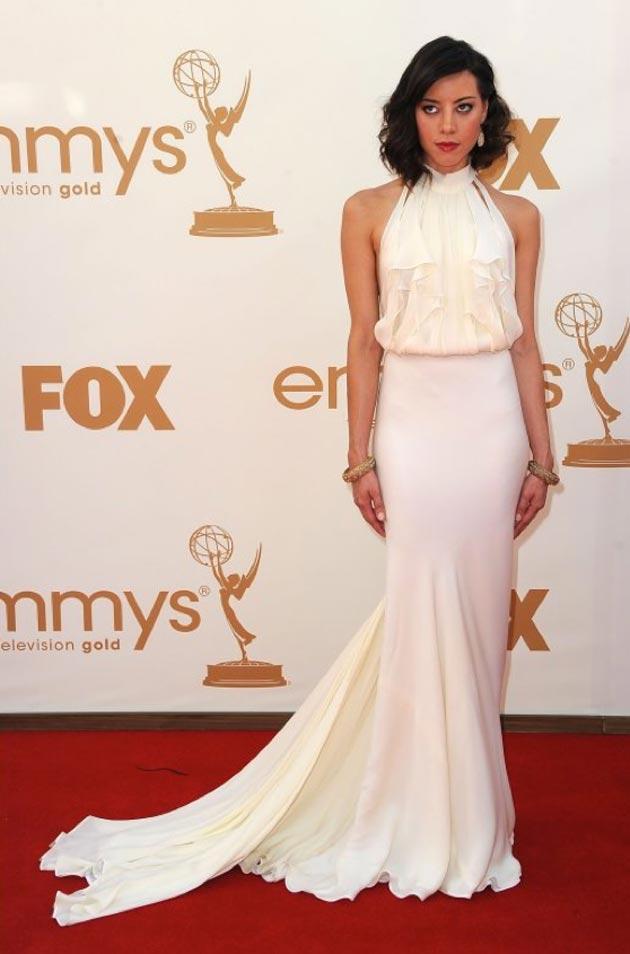 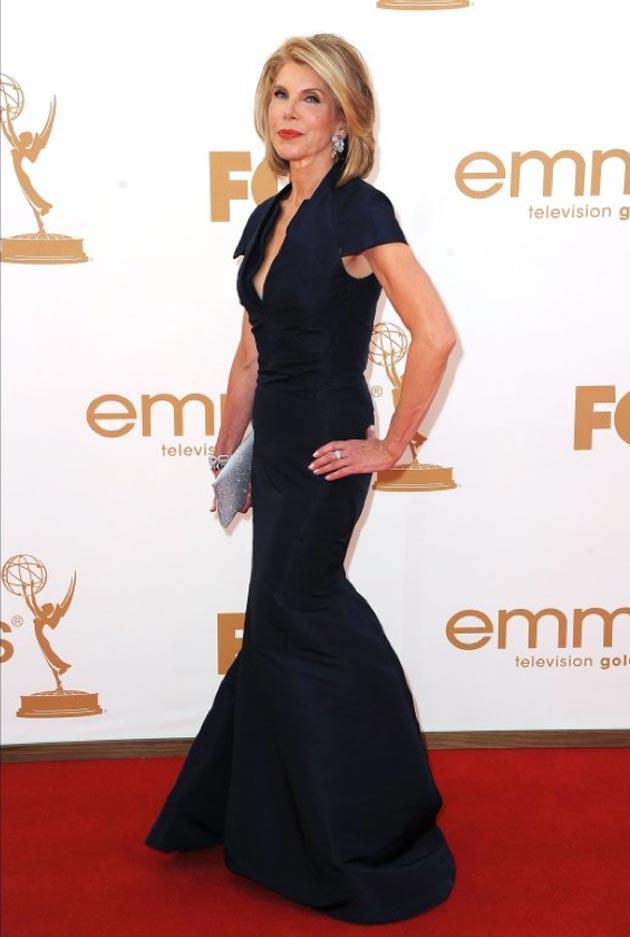 GWYNETH PALTROW – Emilio Pucci Exposed midriff should work on Gwyneth Paltrow because she does all that yogilates and macrobiotic “eating”, but in photos the black tulle tufts create an optical illusion that makes her waist appear bigger than it actually is. Which is every woman’s nightmare. 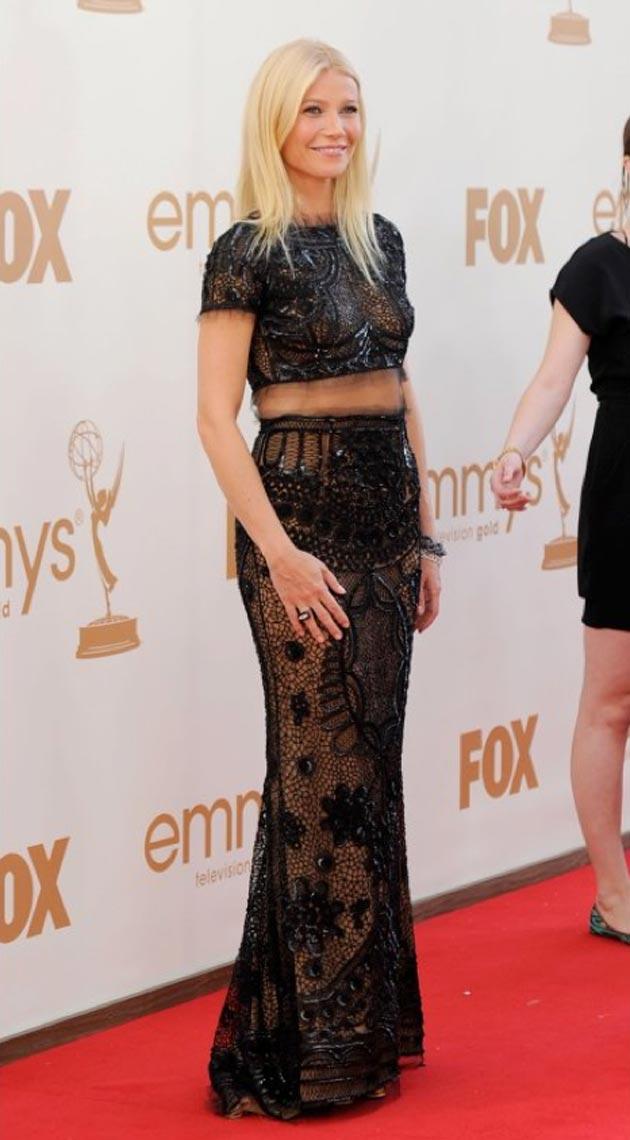 OLIVIA MUNN – designer unknown Olivia Munn you are an out and out babe. What the hell is this ill fitting satin nightmare doing on your slamming bod? Sad face. 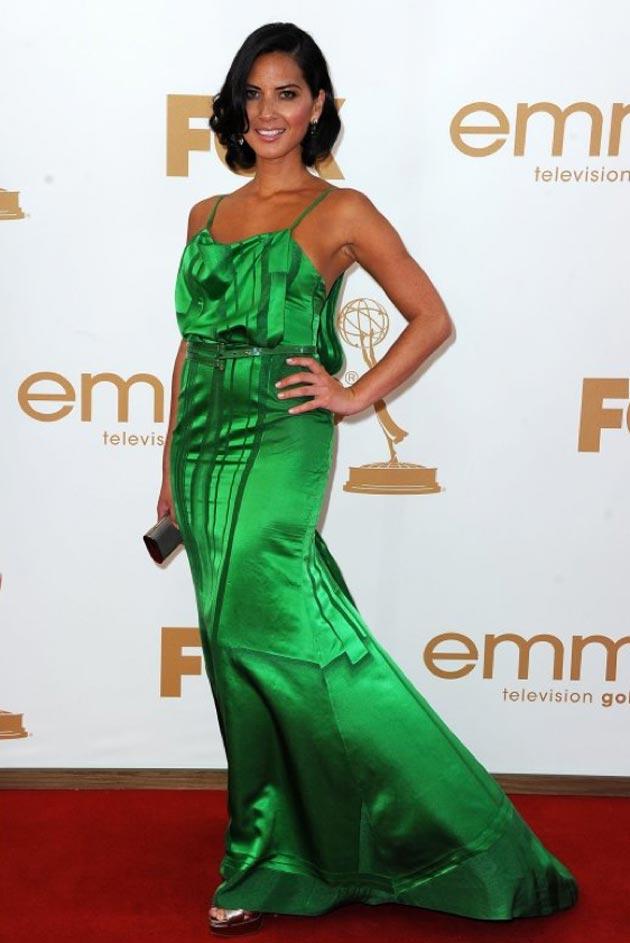 JANE KRAKOWSKI – J. Mendel Jane Krakowski is always great and she recently had a baby so she’s looking amazingly fit but my god the tan. 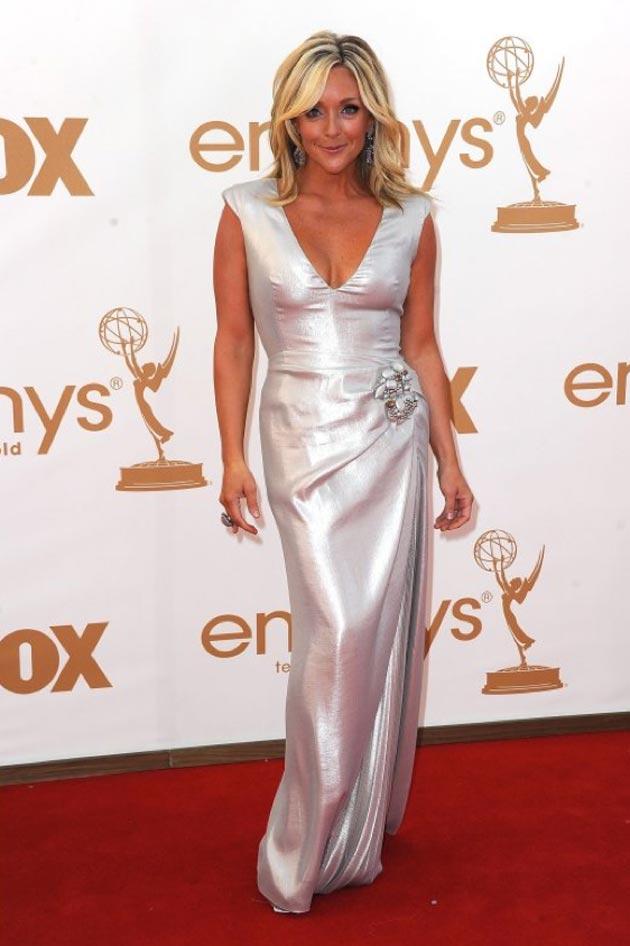 ELISABETH MOSS – Marchesa Elisabeth Moss is just fantastic as Peggy in Mad Men and in general seems like a great person… which is why it’s hard to admit that this bedazzled beige second-skin and old woman hair are truly bad. 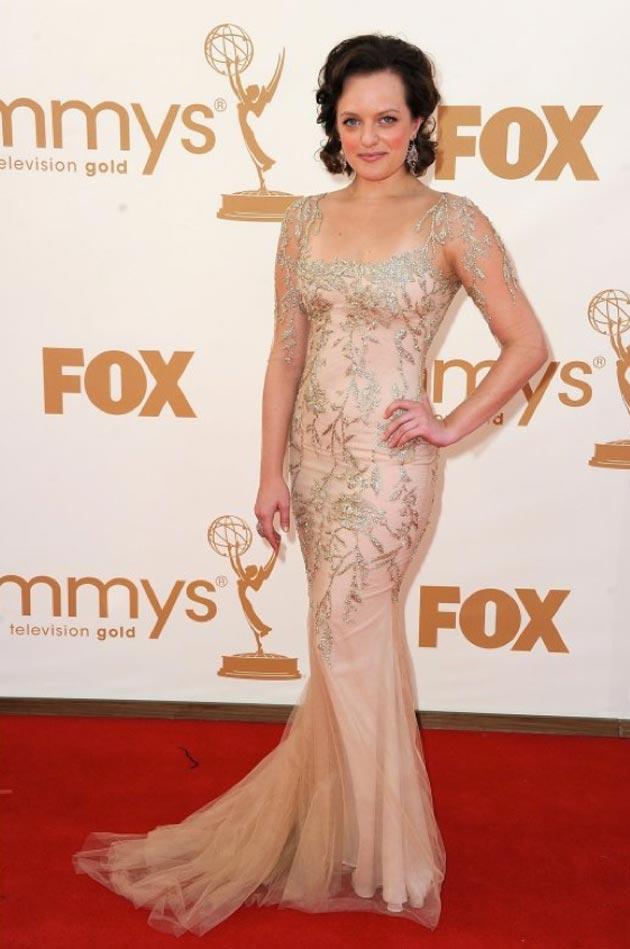 JULIE BOWEN – Oscar de la Renta This dress might have worked better on someone with a little more shape. It’s very straight-up-and-down on Julie Bowen who looks extremely thin. 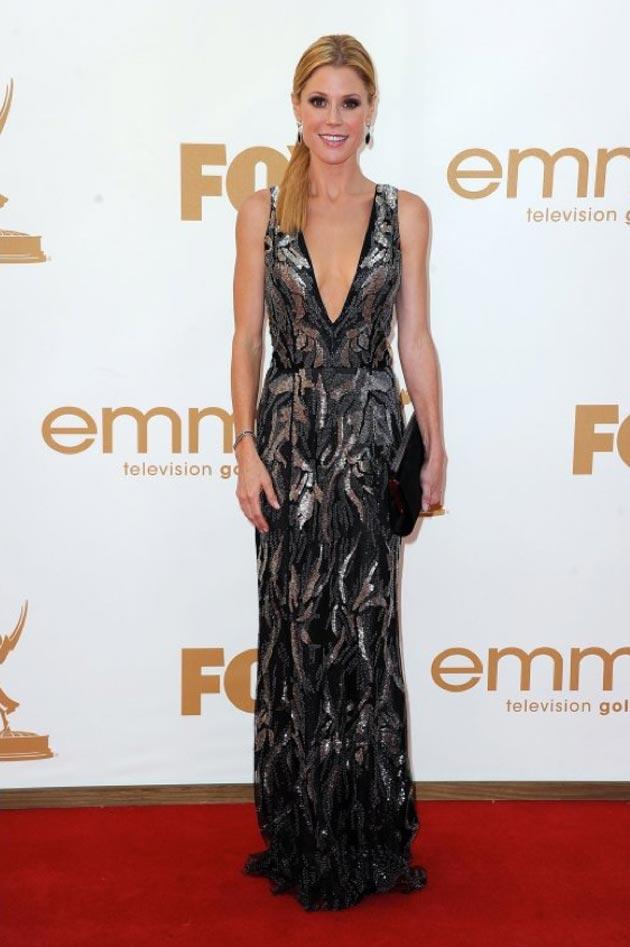 KERRY WASHINGTON – Zuhair Murad Couture The detailed Zuhair Murad dress is one of the prettier red looks for the night. Another surprisingly Emmys appearance. 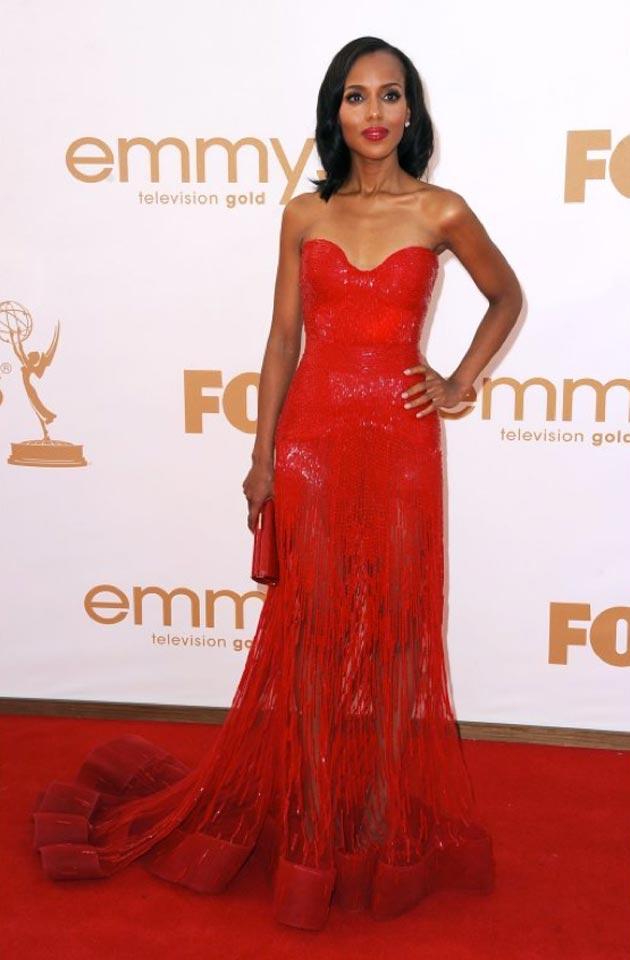 SKELETOR Good to see he ditched Grey Skull for a night on the town. 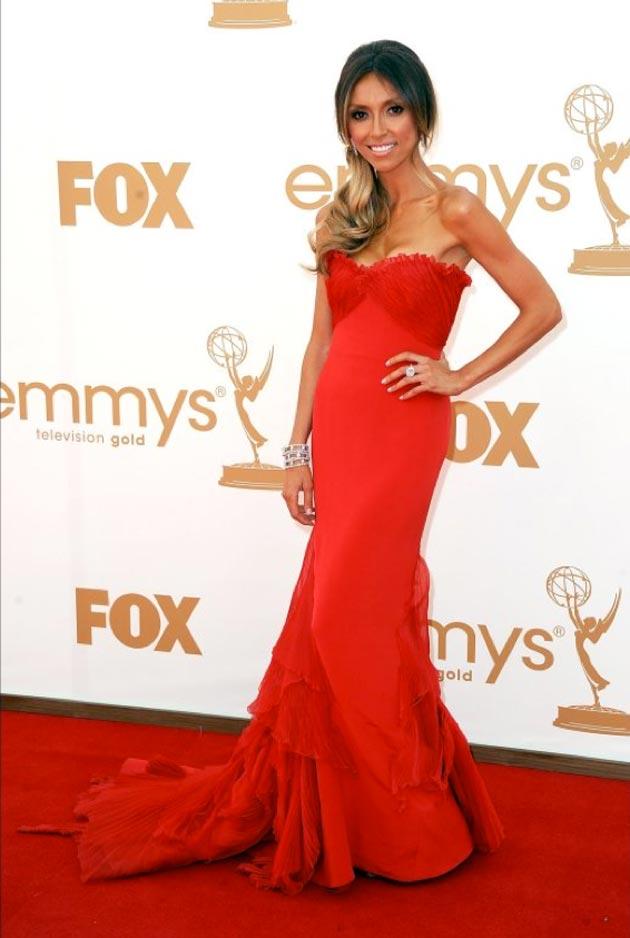 PADMA LAKSHMI and PAZ DE LA HUERTA Look at these hot messes. Padma is a reliably terrible dresser and often – like today – selects hideous bias-cut metallic numbers. Today Paz de La Huerta manages to out-awful her in every way, but her trump card is undoubtedly the ill advised lipstick choice that makes it look as though she was revived from almost-drowning only minutes ago. 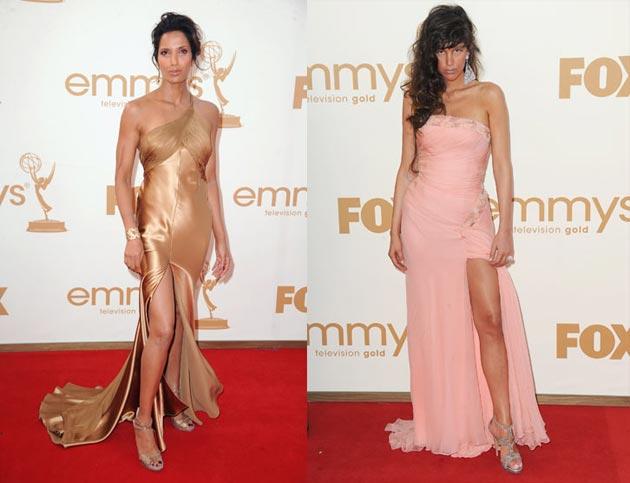 JOEL MCHALE Joel McHale knows that a shit-eating grin is the best accessory you can wear. 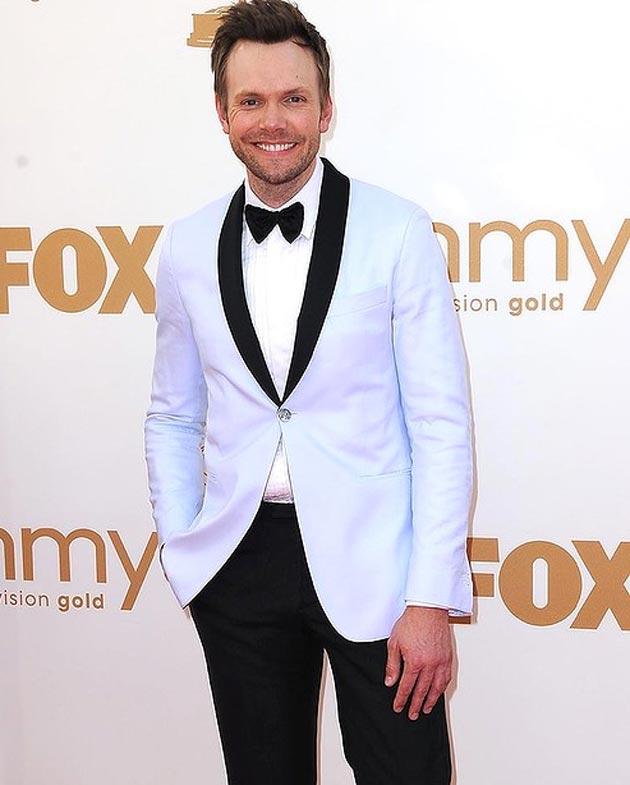