Tessa Thompson has walked back her criticism of Lena Dunham‘s participation in the Time’s Up campaign at Sunday’s Golden Globes.

In a statement posted to Twitter, Thompson clarified that she never wanted to “diminish Lena Dunham and her work”, and expressed her regret that she lacks “finesse in navigating social media.”

“I sometimes lack finesse in navigating social media. Hard to discuss issues with nuance there. A response I made to comments on an Instagram post became fodder for a piece that I believe was designed to create conflict where there isn’t any. It’s perhaps more complex than that. But I, in no way, want to diminish Lena Dunham and her work, her voice, and her importance. We have spoken and she knows my heart. I feel a responsibility to women that have sometimes felt ignored, dismissed and underrepresented. They are my beacons. I regret that my words were misinterpreted to distract from the most important thing:

“The Time’s Up campaign is for everyone, in all capacities, contributions big and small. It doesn’t belong to any one. It is for us all. The beauty of this huge collaboration has been a group of countless committed people who have come together for a shared purpose. To create change. And it is such a powerful thing. I stand, humbled, with everyone involved. Linked not ranked.”

She was referring to a comment she made on Dunham’s post about Time’s Up, which accused her of riding on the coattails of the women who had spent “countless hours” launching the campaign.

She wrote that Dunham “not anywhere present in our group during the countless hours of work for the last two months,” and that her appearance at the pre-Golden Globes meeting – which was open to all actresses attending – was “a surprise to us all.”

Humbled to stand alongside these amazing women and say #TIMESUP on systemic oppression, underrepresentation, discrimination, abuse and violence in all industries. ???? 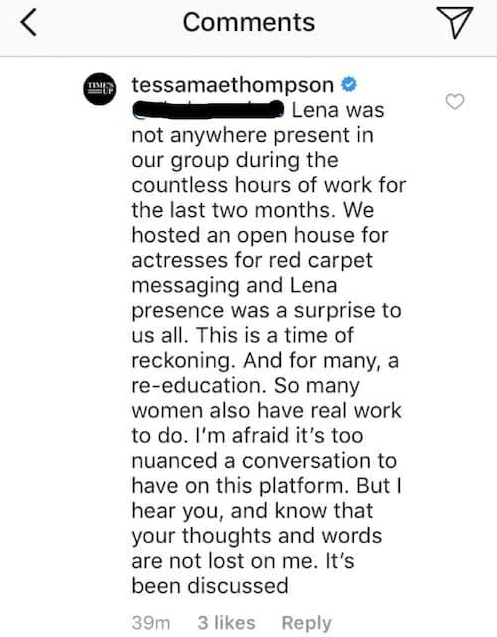 However, many people feel like Thompson’s apology was unnecessary, and that her original criticisms still stand.

I get why @TessaThompson_x probably *had* to release this statement, but it should NOT have been necessary. Lena Dunham personifies everything that is wrong with both white feminism and performative allyship. #TIMESUP https://t.co/5UC3nFMP3o

I'm not sure why Tessa has to be the one to show penitence to a rape apologist whose presence in that photo proved confusing and upsetting for so many women after she threw Aurora Perrineau under the bus. https://t.co/2dnjZ8MrbT

This is unnecessary. The burden on women of color to give folks multiple chances when they mess up is tiring. https://t.co/DWJgWAdqjO

Funnily enough, we read your comments, guys – we know you don’t like Lena Dunham. And it comes after yet another massive misstep for Dunham and the particular brand of performative feminism she so often exhibits: when she accused Girls writer (and woman of colour) Aurora Perrineau of lying about her sexual assault.

There’s absolutely room for ongoing conversations about Dunham within the feminist space, but in this case, Thompson is returning the attention to Time’s Up – which, FYI, has raised over US $16 million. That’s power.

Shortly after the Perrineau comments, Zinzi Clemmons, a writer for Dunham’s feminist newsletter Lenny Letter, quit the publication, writing that it was “time for women of colour – black women in particular – to divest from Lena Dunham.”

It looks like that’s exactly what Thompson is doing.

UPDATE: Thompson has further clarified that her statement was not intended as an apology, but an effort to refocus the conversation to Time’s Up.

This was not meant as an apology, as much as an attempt to re-center the conversation around the work. The truth remains:
Many women, particularly women of color, don’t feel safe and seen. To those women, like Aurora Perrineau—I see you. I am with you. This must be clear. pic.twitter.com/XOEZZYfGpB