It’s been three goddamn months since Gigi Hadid and Zayn Malik welcomed the most genetically blessed baby EVER into the world, and we still don’t have a name and it’s literally keeping me up at night. But my sleeping patterns may soon return to normal as the kiddo’s Aunty Taylor Swift may have unveiled the name in one of the tracks on her new album, evermore.

While many fans are convinced that track 8, ‘dorothea’, is about Tay’s bestie, Selena Gomez, there’s also a hot theory that this could be the name of Gigi and Zayn’s bubba.

To be fair, it’s totally something she’d do. She recently revealed the name of bestie Blake Lively and Ryan Reynolds’ daughter Betty on her last album, folklore.

???? YT | Taylor Swift on ‘dorothea’ in the #willowMusicVideo premiere chat

“There’s not a direct continuation of the betty/james/august storyline, but in my mind Dorothea went to the same school as Betty James and Inez. You’ll meet her soon ????” pic.twitter.com/2FiX7rmqTf

Y'all hear me out. My bestfriend just cracked something i guess. "August" is track 8 on folkore and gigi has posted a picture on Instagram captioning "August, waiting for our girl" and the track 8 of evermore is dorothea. SO WHAT IF GIGI'S BABY'S NAME IS DOROTHEA????? pic.twitter.com/M5TXJjqaGV

ICYMI: Taylor Swift celebrated her 31st birthday yesterday and her legion of celeb mates flocked to social media to wish her a happy bday.

“Happiest 31st Year. My T! Wish we could be together to celebrate. Love you so much,” Hadid wrote on her IG Stories, accompanied by a piccy with her Sagi pal. 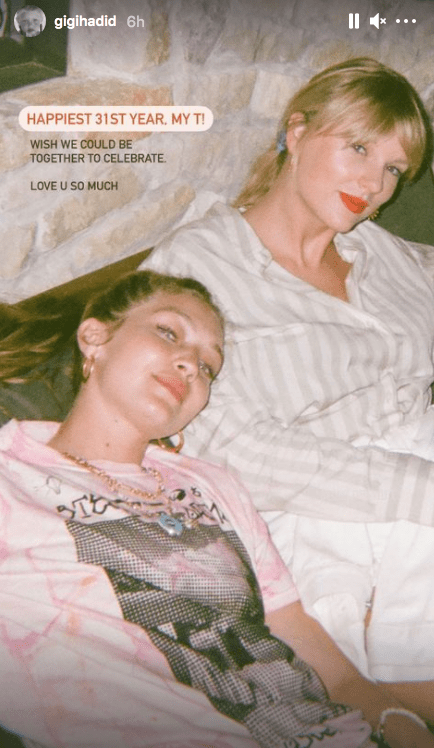 Blake Lively also wished Taylor Swift a HBD, writing: “There was happiness because of you ♥️ Happy happy birthday. Thank you for #Evermore. Absolutely nothing better than getting presents on other people’s birthdays. love you.”

Her hilarious hubby Ryan Reynolds also honoured Taylor Swift on her bday by sharing a photo on his Instagram Story of himself holding one of the singer’s beloved lil kitties. “Happy birthday, @taylorswift,” he wrote.

“Okay so while my new re-records are NOT done, my friend @VancityReynolds asked me if he could use a snippet of one for a LOLsome commercial he wrote so…” Taylor wrote. “Here’s a sneak peak of Love Story! Working hard to get the music to you soon!!”

Peep the hilarious vid below for a lil taste of what’s to come when Taylor Swift drops all the re-recordings of her old albums.

Okay so while my new re-records are NOT done, my friend @VancityReynolds asked me if he could use a snippet of one for a LOLsome commercial he wrote so…here’s a sneak peak of Love Story! Working hard to get the music to you soon!! https://t.co/0vBFXxaRXR