Who Is The Real Succulent Chinese Meal Guy? A Major Investigation Of All The Evidence

He’s an Australian legend, a myth, and a man whose story has more plot twists than most. Some refer to him as ‘Succulent Chinese Meal’ man, while others simply call him ‘Democracy Manifest’ guy. Clearly, the man has a knack for nicknames, but who is he really?

The viral video that we all know and love features a single man being arrested in 1988, and shouting out some colourful absurdities like “I see you know your judo,” “what is the charge? Enjoying a succulent Chinese meal?”, “this is democracy manifest”, and “get your hands off my penis.”

The famous clip also shot to viral internet fame when it finally landed on YouTube in 2009.

However, what started as a hilariously theatrical arrest in the late 80s has since morphed into an unsolved Aussie mystery, with multiple theories, speculations and rumours attached to it. To this day, the main question on everyone’s lips is, who is succulent Chinese meal man?

Some say the man in the video was a Hungarian conman and chess master who died in 2003, while others claim the video isn’t even real to begin with. Call me Velma because I love a mystery.

Friends, it’s deep-dive time. I’m gonna investigate all the evidence we have around who the succulent Chinese meal man is.

First, we have to start at the very beginning of course, with the video that started it all.

The Video That Started It All

For the uninitiated, here is the best and most Australian arrest video ever.

This, my friends, is a man believed to be Cecil George Edwards. The kicker here is that this name won’t really appear much again, because our ‘main man’ operated under many an alias.

Some simple facts to go off here: this was an arrest for repeated dine-and-dash antics, in which the man would eat at restaurants across Australia and just head on out without paying.

In the past, it has been reported that the Democracy Manifest / Succulent Chinese Meal / Get Your Hands Off My Penis bloke was in fact a man named Paul Charles Dozsa, who was being arrested in Sydney at the end of a series of dine-and-dash incidents.

Paul Charles Dozsa, reportedly born in Hungary in 1940, was a former chef and world-champion chess player and was known as a serial “restaurant runner” – with newspapers covering the news of his 54 convictions and November 1988 escapades at a Thai restaurant in Potts Point and the Sheraton-Wentworth in the CBD. 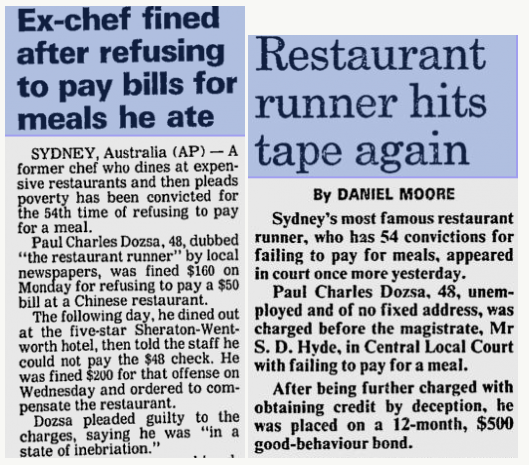 By 1995 the renowned ‘meal thief’ had achieved a self-proclaimed world-record of 111 dine-and-dash convictions.

It was also reported through the chess section of the Weekend Australian in 2003 that Mr Dozsa had passed away at age 63. Cecil George Edwards? Merely an alias. 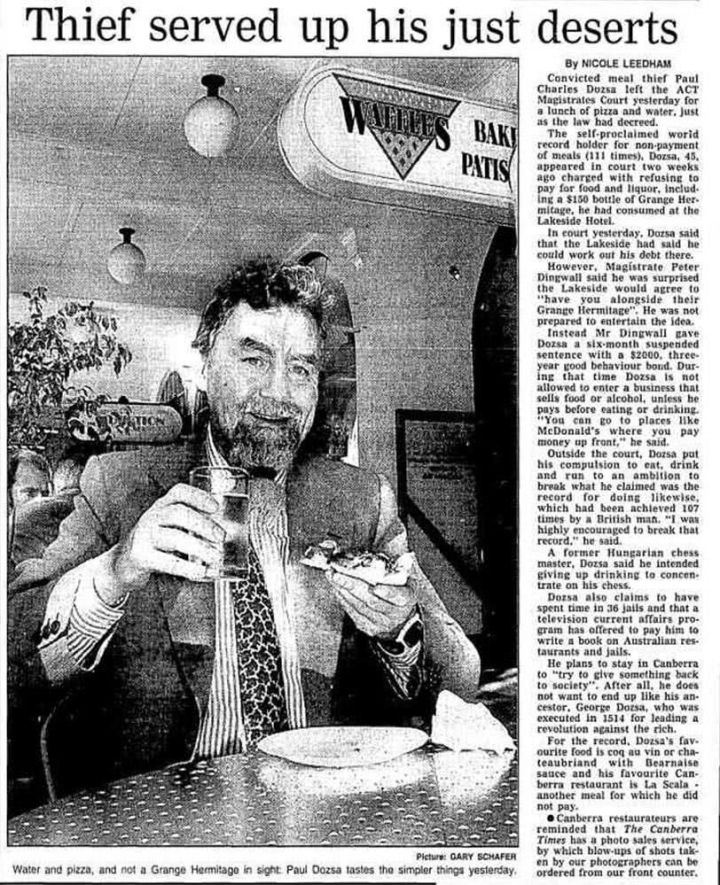 But was this serial dine-and-dasher, whose criminal record fit the bill perfectly, actually the man in the video?

In came the comparisons of the two side by side, because people just weren’t convinced that this Hungarian dine-and-dash king was the same man with a Shakespearian drawl and an over-the-top personality.

I mean, look at the pics for yourself and you’ll understand why things just weren’t adding up.

To make the story even more interesting, Paul Charles Dozsa, also known as Pal Dozsa, had a website, which made some rather wild claims.

Pal Dozsa, our alleged democracy manifest man, told most of his story on his very own website, which seemingly left out the fact that he had been the star of any kind of succulent Chinese meal saga.

Instead, it alleges that he was a research subject of Warsaw Pact Military Research, who was implanted with a chip in Budapest, 1958. Yep.

“The knowledge of the Hungarian Research is extremely advanced,” he wrote.

“Since 1958 I did not have taken any medicine, painkiller, or sleeping pill. They have been replaced with harmonizing electromagnetic waves and hypnotic suggestions. The way of the communication is Budapest Research Centre, satellite, and my implant.

“The researchers can dominate the implanted subjects mind, and control their body… they can kill any of us, who has the implant, or can make us mentally or physically ill.”

The main thing to take note of here is that Pal Dozsa writes with an accent, and so clearly must talk with one too. Our succulent Chinese meal man, although rather strange and eccentric, probably wasn’t a Hungarian dine and dodger with a chip in his brain.

Now, a working theory is that Paul Dozsa was the man that the police were looking for when they arrested the succulent chinese meal man out of nowhere.

Fortunately for us, they just happened to stumble upon an eccentric lookalike who loves to perform for the cameras.

In a 2015 article on the arrest of Paul Dozsa, there’s a huge quote inserted from a website called Oz Chess, which no longer exists. Here’s the link if you don’t believe me.

Thankfully we have all the excerpts we need to understand the ‘chess master’ side of the enigmatic Paul Dozsa.

“Dozsa described himself as a Hungarian nobleman and was always very well dressed… and gave the impression that he was a person of wealth and owner of a string of high-class restaurants,” the site reportedly read.

“In those days Dozsa stayed in the finest 5-star hotels (under a variety of names) in all Australian cities but very consistently left before paying the bill.

“Dozsa took great delight in telling everyone that he had perfected his crime.

So yeah, a lot to unpack here, but it gets wilder.

Chess Chat, Anorak, And The Curious Case Of Filming

Here he is, our main man, chess champion and alleged king behind the succulent Chinese meal antics. By now I’m sure you’re starting to understand that it probably wasn’t Paul Dozsa.

It’s a case of *someone* being in trouble for dining and dashing, and *someone* being filmed in a hilarious arrest video. These two people can’t be the same person, right? 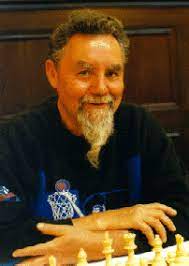 Here’s what folks who knew Paul Dozsa, who they call ‘Paul D.’, wrote on a Chess Chat forum when their friend was alleged to be the one in the viral video.

“Did not look like or sound anything like him. That was an English accent,” one user wrote.

“He gave my son free chess lessons, he was an excellent coach.”

“I met Dosza in Elwood about 2003. He was playing in the State Championship. I spoke to him briefly and my view is the accent of the man in the video is not a match,” wrote another.

And if we move over to a site called Anorak News, there’s a lovely lady in the comments section who claims a similar thing. The man in the viral video is not Paul Dozsa.

“[Paul] spoke with a distinctive accent, not like Sean Connery, didn’t even look like this actor in this video,” the woman named Susan Bako writes.

“This wouldn’t be his figure of speech, he never raised his voice, so this is a reenactment. Knowing his sense of humour, he would have invited the cops for dinner.”

So there we have the first claims of the viral footage being a reenactment, with a paid actor featured in it. The thing is, if the man was an actor, why have we never seen him in anything else?

READ MORE
Brown Cardigan Celebrated 1M Followers On IG With A Top 100, So Who Says We Have No Culture?

Introducing a man who looks a LOT like the bloke from the viral video. He has a similar way of talking, and has a similar appearance to the succulent Chinese meal man.

So who the fuck is this guy?

For some reason the first people to grab hold of this legend and unearth his story were SportsBet? Leading journalists of our time that they are known to be, they grabbed up ‘Democracy Manifest Guy’ and let him reintroduce himself to the world.

Naturally, we all thought the bloke was fkn dead, so it came as a shock.

On the very same day that SportsBet launches their interview with Mr Democracy Manifest, The Chats launch a video for ‘Dine N Dash’, featuring the same man, who makes an appearance.

He even recreates his iconic arrest scene, and it’s pretty spot on.

And with the new Chats video comes a new website – MrDemocracyManifest.com.au – which has one “Jack K” alledging the reporting about the Hungarian elite chess player who died in 2003 isn’t our beloved dine n’ dasher. It’s him. And he’s very much alive and living in Queensland, selling paintings of all things.

Though we truly don’t know much more about this Jack K, beyond the fact that he’s apparently the Succulent Chinese Meal bloke and definitely not a deceased Hungarian ex-chess player, there are still questions to be asked here.

First of all what the fuck is going on.

Secondly, why do The Chats play such an instrumental part in this story?

Who is this “Jack K” though?

There’s not much that’s been said about him before The Chats / Brown Cardigan / SportsBet appearances, but in 2020 he started claiming that he’s the actual guy in the infamous arrest video. He’s the one we’ve been looking for, apparently.

No rhyme or reason behind the sudden claims, he just… decided to set the record straight… many years on. And now sells paintings of the infamous scene… and profits off it.

I’m not suggesting anything, but if you have a look at his freshly done-up Instagram, it also has a name that capitalises on the viral video.

But hey, maybe he is just an old legend who lives in Brisbane and likes to paint. He’s pretty fkn good at it too.

Perhaps he just wanted to avoid the spotlight for a couple years and now wants his time in the sun? I’ve got nothing.

Questions: Does he have documents from his brief arrest? How did the newspapers and subsequent media manage to think he was an entirely different man named Paul Dozsa? Is this all a part of a decades-long con that he’s finally emerging from? Are we all being played?

Who is the real succulent Chinese meal man?

Introducing another interview with the legendary man, but this time in 2021. 7 News decided that it was time to dust off the old speculations machine and bring Jack K back into popular conversation.

Jack K claims that even he is unsure what the hell happened that day, but just knows that police arrested him under the belief that he was some sort of ‘international criminal’. He was released shortly because they weren’t the guy they were looking for.

Our Paul Dozsa was just an Aussie crim who dined and dashed, so he couldn’t have been the international criminal they were looking for, right?

“They told me, no, we’re sorry, we thought you were somebody else,” says Jack.

“I don’t know who they meant. It might’ve been some Hungarian chess player called Dozsa. Apparently, he used to go into Chinese restaurants and dud them… but how would that make you an International criminal?”

Now we wait, in confusion, looking at all the facts and making guesses.

It looks like this Jack K may actually be the man behind the viral video, but just never felt the need to say anything.

For all those years, people thought it was Paul Dozsa, our brain-chipped, Hungarian, chess master with 111 convictions for meal theft across the country. But hey, guess it wasn’t him after all.