For the first time in history Spain has won the World Cup after beating the Netherlands 1-0 in extra time. The game-deciding goal was scored by Andres Iniesta who immediately became a local hero as 300,000 people packed into Madrid’s Paseo de Recoletos boulevard went nuts as the final whistle was blown.

The real hero of the World Cup was Paul the oracle octopus who successfully predicted the winner of 8 out of 8 games through divination. Here he is chilling out after a hard afternoon of harnessing psychic energy: 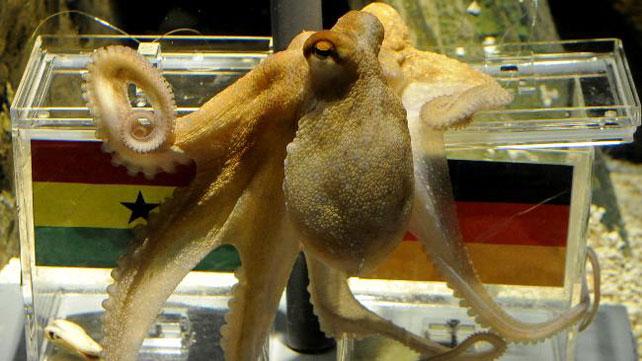 Paul’s international celebrity has heightened to a level of renown to match high-profile psychics like television medium John Edward and Woman’s Day clairvoyant Ann Ann, and now everyone wants a piece of him – in one way or another. After Paul failed to predict his home nation of Germany – who subsequently lost to Spain in the semi-finals – Paul and his minders received several demands that the predicting ‘pus be barbecued.

It’s also been reported that a group of Spanish businessmen are negotiating with the German aquarium to have Paul relocated, a move supported by Spanish Fisheries Industry Minister Miguel Sebastian has called for the creature to be given an “immediate” free transfer to Spain to “ensure his protection.”

After the final an emotional Iniesta described the historical win as “unbelievable, incredible.” He said, “It took a lot of energy… it was hard work but we’re savouring this now.”

The Netherlands coach Bert van Marwijk ruefully reflected that the loss was “very bitter, but that is sport. It is harsh. And as I said, Spain were the better team.”