After publishing a story about the rumoured business woes of Aussie influencers Mia Plecic and Sophie Cachia, we copped a spicy DM with more deets.

As pointed out in the latest episode of the Outspoken the Podcast, the gals appeared to have gone their separate ways.

Earlier this week, Cachia announced that AISURU was now “a one-woman show”, which seemingly confirmed that Plecic was no longer part of the business.

To add spice to the matter, Plecic also removed the brand from her Instagram bio and even unfollowed the page that they once managed together.

And even spicier: both gals no longer follow each other on Insta.

“I am still a Director of AISURU and an equal shareholder to Sophie,” she said.

“I just took a step back as Slick Hair Company is going through huge international growth and I need to focused on the brand that is growing.”

But according to the DM we received, the brand was telling folks Mia was no longer involved as recently as June.

The DM included a screenshot between a follower and AISURO in which they asked if Mia was still part of the brand.

This was around the time that Mia compared abortion laws to vaccine mandates.

“Is Mia a co-owner of this company? I hope you are aware of the views she is posting on Instagram,” they asked.

“No, Mia is no longer involved with AISURU,” the brand responded.

The fact that they’re both out here offering opposing public statements is very suss and alludes to the fact that something has gone awry here.

AISURU has been embroiled in several scandals since its inception.

Back in February, folks lost their shit after noticing Cachia wiped her nose in an Instagram video while conducting a “quality control” exercise.

The brand later apologised via their IG Stories. 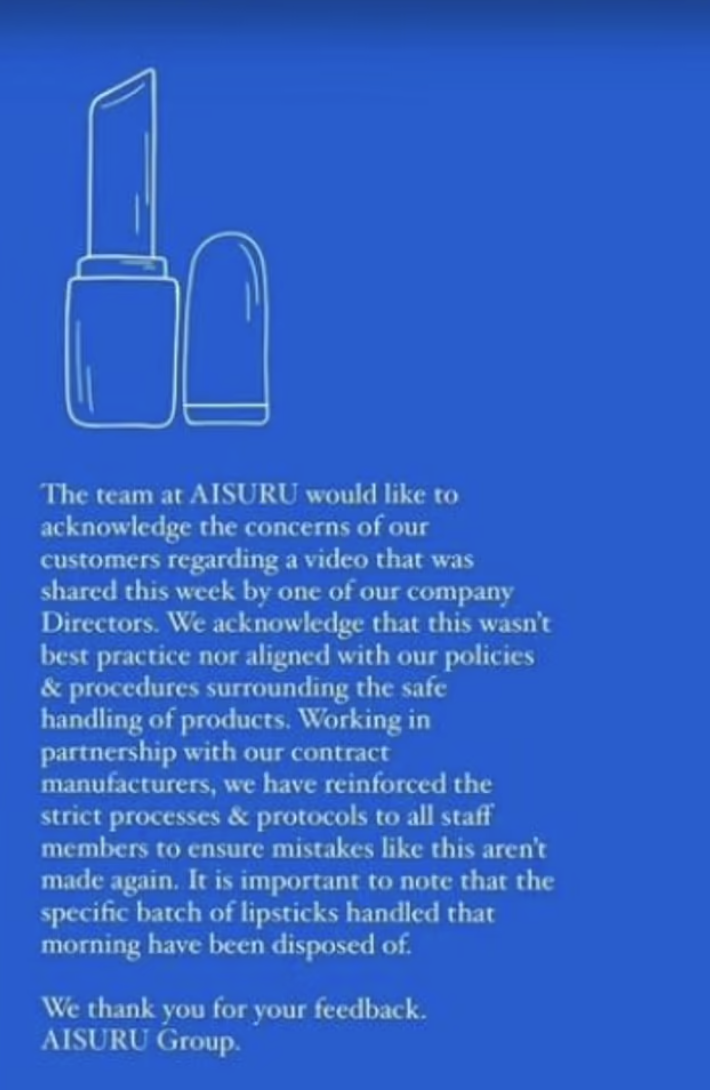 “The team at AISURU would like to acknowledge the concerns of our customers regarding a video that was shared this week by one of our company Directors,” it read.

“We acknowledge that this wasn’t best practice nor aligned with our policies and procedures surrounding the safe handling of products.

“Working in partnership with our contract manufacturers, we have reinforced the strict processes and protocols to all staff members to ensure makes like this aren’t made again. It is important to note that the specific batch of lipsticks handled that morning have been disposed of.”

Both Cachia and Plecic have also both been embroiled in public scandals, including the aforementioned abortion comment backlash, plus Cachia being called out for dodgy sponcon practices.

PEDESTRIAN.TV has reached out to both Plecic and Cachia for clarification on the current status of both their business and their relationship.