So Paramount Are Now Cancelling Screenings Of ‘Team America’ As Well

Somewhere in North Korea, someone’s sitting on the mother of all damning revelations, and Hollywood is absolutely shitting themselves.

We know that a group going by the oddly US patriotic sounding name “Guardians of Peace” hacked their way into Sony Pictures archives and found the folder someone must’ve clumsily labelled “Everything That Anyone Has Said Ever.” And we know that they’re based in North Korea, and did this because they weren’t too jazzed on the idea of Seth Rogen and James Franco‘s upcoming film The Interview. As a result of this, Sony pulled the impending release of the film – first from theatres, then from everywhere else.

Some independent theatres in the states, being unaffiliated with the big boys and thus being gifted the ability to give precisely zero fucks, were suitably miffed about the whole situation, and announced that in place of planned screenings of The Interview, they’d be showing Team America: World Police instead – because who seriously bows to pressure from a tiny, pissant communist country who realistically has all the menace of a bee at a swimming pool? (run at me, Pyongyang).

Welp, as it turns out, the film’s distributor Paramount is putting the kibosh on that as well, pulling even that film from tiny little indy cinemas because REASONS.

Due to to circumstances beyond our control, the TEAM AMERICA 12/27 screening has been cancelled. We apologize & will provide refunds today.

No one seems to know what’s going on, and no one who knows things about it is saying anything.

But long story short, because a tiny little country halfway around the world doesn’t like how a couple of stories are being told, people cannot freely choose to go see a handful of movies. 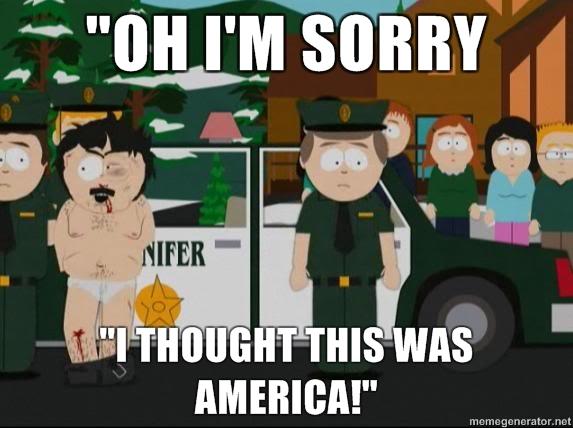