The ‘SNL’ Take On The Aziz Ansari Story Is Painfully, Viscerally Accurate

The show struggles when it comes to sexual misconduct allegations and one of its own, as it did with the Louis C.K. story (both Aziz and C.K. have hosted in the past). But at least in the C.K. case, it was clear cut, and the comedian himself admitted that he was guilty of incredibly not-okay behaviour.

In the Ansari story, everyone has a different opinion as to whether it ‘counts’ as sexual misconduct, who was at fault, if it was even newsworthy in the first place, and on and on it goes.

So SNL managed to tackle the Ansari story in just that way: via an awkward dinner party conversation where everyone sort-of has an opinion but isn’t sure if it’s a good one.

Will Ferrell (who earlier brought back his George W. Bush character to remind everyone that despite recent, favourable comparisons, he was still a pretty shit president), Kate McKinnon, Heidi Gardner, Aidy Bryant, Beck Bennett and Kenan Thompson are having a nice dinner-table chat, when suddenly…

“Has anyone read that article about… Aziz Ansari?” Gardner asks. Everyone freezes, expressions of horror on their faces at the social minefield they’re about to stumble through.

“Of course we can talk about it,” says Ferrell, although the opposite is blatantly true.

“I think that some men have a proclivity…”

“While I applaud the movement…” attempts Thompson, to calls of, “Watch it!”

“It seems the issue is intersected with the issue of race,” he continues. Everybody screams.

Bennet makes the call that you’ve definitely already heard by now. “The thing that I keep going back to is, it seems like, if she wanted to leave… she could have just… left?”

[Side note: it’s incredible how many people seem to forget that she did, in fact, leave.]

McKinnon even takes a light jab at Babe.net, the controversial website that published the Ansari account. “We are in a post-Babe.net universe and we have to finish what we started.”

The night dissolves into chaos. Byrant cuts her hair, Bennet hides inside his jumper, and Thompson stabs his own hand with a steak knife. Somewhere, a bomb goes off. A fox dissolves in acid. And Ferrell slams his face into his own food rather than say the wrong thing. 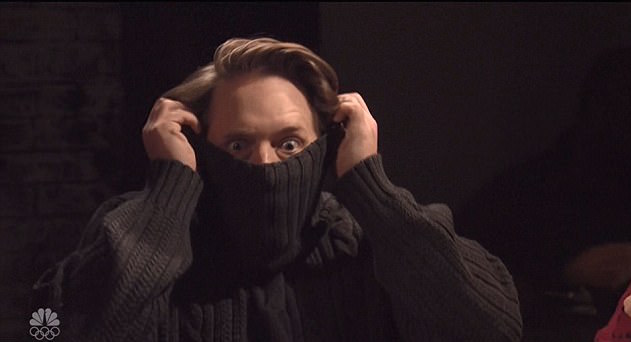 If nothing else, the original Ansari story proved that we barely have the tools to discuss issues of consent, coercion and sexual misconduct when it doesn’t fit with a narrative of ‘sexual predator’ that we’re familiar with. And plenty of people reckon SNL perfectly encapsulated that awkward conversation we’ve all been having.

this aziz/SNL sketch is pretty brilliant

The huge, painfully obvious downside? The video hasn’t been made available in our country (again). Guess you’ll haVe to Peruse Foxtel for your viewiNg pleasure.