After the Sex and the City reboot premiered on Thursday, fans were shocked when one scene featuring a man and an exercise bike turned out to be far less steamy than you would’ve predicted an SATC ep containing those elements to be. Before we get stuck into the scoop, be aware that this article contains SPOILERS. You’ve been warned.

The victim of the biking incident was the forever emotionally unavailable love interest, Mr Big (Chris Noth). Big married Carrie Bradshaw (Sarah Jessica Parker) in the SATC movie after showing up to Paris and professing his love to her in the final episode of the series.

My god, a man who is romantic AND can also do logistical organising? He truly is a work of fiction.

In the opening episode of the reboot titled And Just Like That… Big takes a 45 minute peddle (who’s got the time, honestly) on one of Peloton’s fanciest stationary bikes.

During the workout, he suffers a heart attack which shocked fans as much as it did Peloton, which 9 Honey reported were “unaware” its bike would play such a big role in the episode.

Peloton’s shares took an absolute dive from a high of USD$45.21 on December 9 when the episode dropped to a staggering USD$37.83 on Friday afternoon. 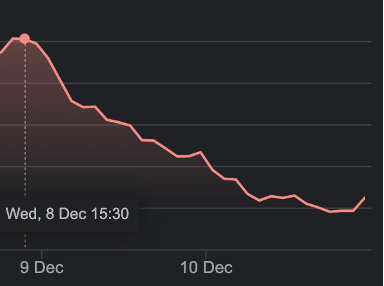 See that squiggly red line? From what I know about stocks, when the line goes down, that’s bad. I think…

Peloton then issued a statement to Us Weekly and to its credit, it’s a clever response despite the obvious corporate cringe.

Dr. Suzanne Steinbaum is the cardiologist and member of Peloton’s health and wellness advisory council (which sounds more like something out of the United Nations than an exercise bike company) who was tasked with explaining the messy sitch.

“Mr. Big lived what many would call an extravagant lifestyle — including cocktails, cigars, and big steaks — and was at serious risk as he had a previous cardiac event in Season 6,” she said.

“These lifestyle choices and perhaps even his family history, which often is a significant factor, were the likely cause of his death. Riding his Peloton bike may have even helped delay his cardiac event.”

Did she seriously just try and swing that negative into a positive?

A bold tactic to say the least. I guess the squiggly red line will be the judge of whether it pays off.