It has now been confirmed by James Cameron that Sam Worthington and Zoë Saldana will return to Pandora for all three of the planned Avatar sequels. Mr. Lara Bingle is no doubt happy with the New Zealand filming location, on account of the close proximity to his boo, and all actors in the series are definitely getting payed sickening amounts to once again take up their quest to protect or obtain the precious Unobtanium [snigger]


In a statement Cameron said: “Jake Sully is rare combination of passion, strength, street smarts and soul, which requires a lot from an actor. Sam brought to the role a combination of sensitivity, vulnerability and strength. Zoe captured every aspect of the character I envisioned, bringing to Neytiri a mix of delicacy, fierceness and incredible physicality. I am beyond pleased they’ll be returning with us to Pandora.”

In other related news, Stephen Lang will be back as Ghost Colonel Miles Quaritch? Nope, just checked imdb and he’s going to be playing civilian Miles Quaritch, which means FLASHBACK SEQUENCE! Cameron is currently writing the three films with Josh Friedman (War of the Worlds), Rick Jaffa and Amanda Silver (Rise of the Planet of the Apes) and Shane Salerno (Savages).

Also, according to THR, Jake Sully and Neytiri keep doing the nas’ti and have little baby Na’vi together in the sequels. Meanwhile, a woman in Brisbane makes mildly terrifying Na’vi bbi dolls, so if you really can’t wait till the next film is released in December, 2016
: 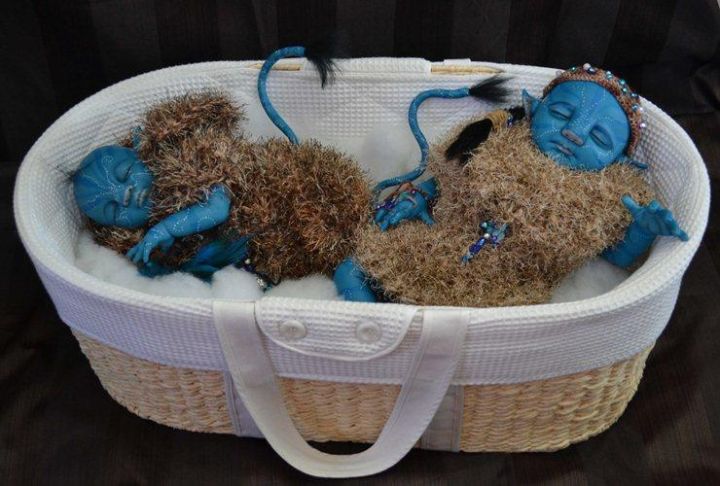 The third Avatar will be released in December 2017 and the next in December, 2018.