Ryan Kwanten Is GQ’s Man Of The Year

What are the qualities that are deemed manly enough to put an Australian man in contention for the title Australian Man Of The Year? Is it his ability to pluck kittens out of trees? Is it the speed at which he can chop wood? Is it how thick a beard he can grow or how many beers he can drink or how large an explosion he can cause? GQ Magazine reveal none of the secrets to the criteria on which they judge their annual competition, except to say it’s a “celebration of talented, stylish and intelligent Aussie men”. 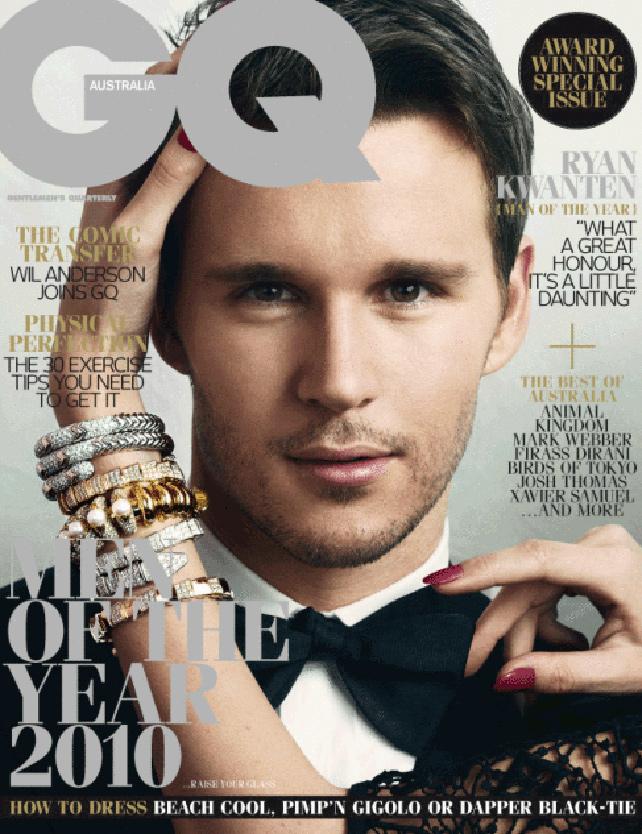 The 34-year-old is best known for his seldom-clothed role as dumb ass sex fiend Jason Stackhouse in the HBO vampire series, but as it turns out in real life he’s a pretty switched on – and amusing – guy. In his interview with GQ he explains the concept behind his written debut. Here’s an excerpt…

I pause to try and think of a life-changing question I might ask myself. Then I realise that if I do, I risk falling victim to Kwanten’s sharp wit for a second time. He won’t elaborate on what ‘the question’ should be, so I ask instead why it’s called the G-Strategy. Perhaps that explains why it’s been misconstrued as a sex book? “No, that’s not it,” he says. “G refers to the second step in the book where you give yourself a G-Name.”

“Take your name. That name may have certain stigmas or inhibitions that you attach to it. But with a G-Name like ‘Mr Special’, you might feel like you can do anything. It might be a name that you call yourself, or you may ask other people to call you Mr Special.”

Vinnie’s come a long way from Summer Bay. And everyone’s a little bit in love with him.

We were also excited to hear that the boys from Vanishing Elephant took out the award for Designer of the Year. The label and trio of designers Felix Chan, Huw Bennett and Arran Russell were rewarded for their casual, considered design approach which favours classicism and a good pair of pants over flash in the pan trends or the futile pursuit of blacker blacks and drape-ier drapes.

The award comes at an exciting time for Vanishing Elephant with further international activity, including a growing stake in the US market and expansion within Europe.