Aussie Icon Holly Valance Might Be Joining RHOBH & This News Is So Good, I Could Kiss Kiss It

Deuxmoi shared the tea on the ‘gram, which came from an email address called ‘kisskiss’, which is an obvious reference to Holly Valance’s iconique song.

“Holly Valance is supposed to be joining RHOBH this season as a friend of Dorit,” they said.

“It’s definitely going to be interesting as she was a known singer / actress before marrying her billionaire husband Nick Candy. They’ve kept it under wraps as this is going to be her return to the spotlight.” 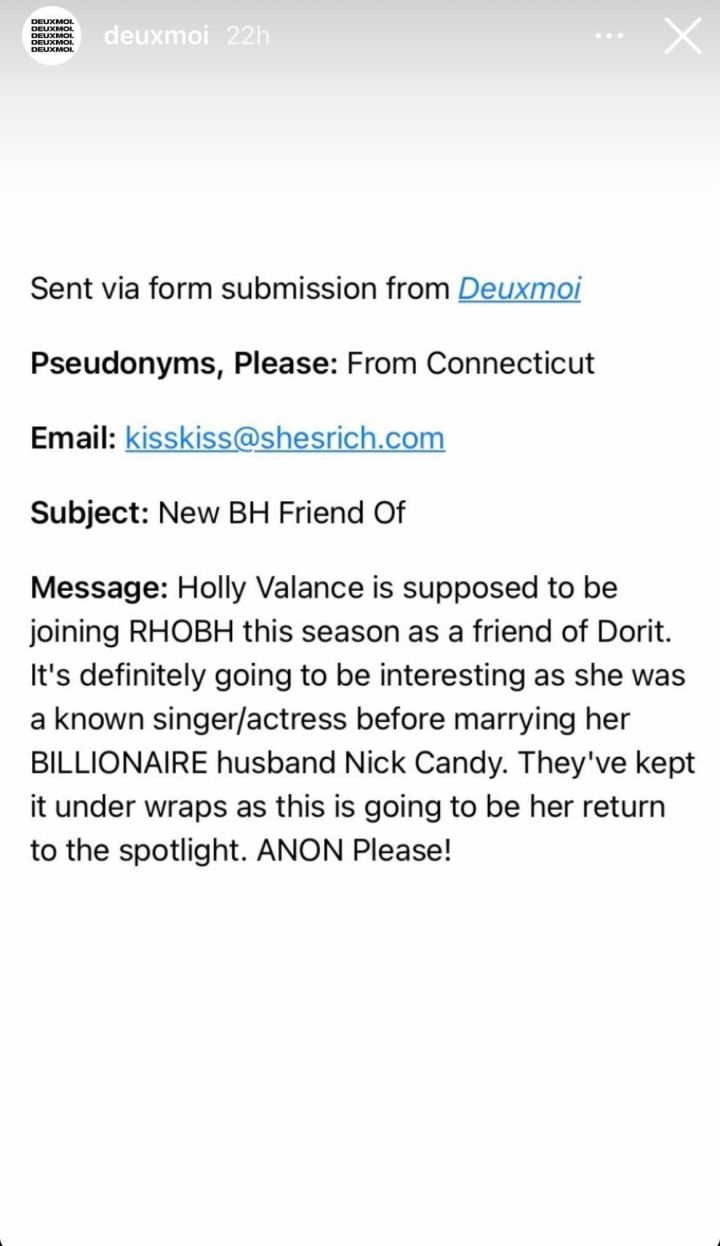 Holly Valance played Felicity Scully on Neighbours from 1999 to 2002, before moving overseas and landing some pretty sick gigs in Hollywood.

She’s been in that iconic Liam Neeson flick, Taken, and she was in two seasons of Prison Break. And let’s not forget her two hit albums – which scored her a slew of ARIA nominations – plus her VMA Award for the ‘Kiss Kiss’ music video, plus two Disney Channel Kids Awards.

The last episode of RHOBH season 11 aired last night and the four-part reunion is coming to Hayu soon.

Meanwhile the casting for next season is still up in the air. We interviewed OG Beverly Hills queen Kyle Richards earlier this week and she said that even she isn’t sure what the deal is next season.

When I asked her if she’s returning next season, she said: “That hasn’t been brought up yet. Every year I think ‘Oh, it’s a given,’ but you kind of wait and see how you feel, and then, you know, they start bringing it up again to see where your head’s at.

“I’ve been here a long time. Eventually I’m gonna have to walk away!”

So there may even be an open spot on the cast for Holly to join in a full-time capacity, if the rumours are true.

Take this with a large grain of salt, as it’s just Deuxmoi gossip at the mo. I’ll be keeping my eyes peeled for more concrete evidence though, don’t you worry.