Christmas is a time for giving. It’s also a time we all cram into shopping centres and terrorise poor retail staff with a) insane demands, b) rude requests and c) general chaos.

In general, shoppers over the Christmas period are shit. Even the good human beings turn into gremlins as they start grabbing the last size of some t-shirt for their cousin’s boyfriend, or asking already overworked staff to go out the back and double check when they already KNOW there aren’t any more Barbie Play Houses left.

Am I projecting here? You bet your sweet bippy I am – I worked Christmas retail for around five years, and every one was worse than the previous. The carols, the shit shoppers, the constant mess your manager wants cleaned up… H E L L.

I asked around and turns out we all know of retail hell. Here are some wild tales that’ll have you being extra nice to that Woolies checkout dude as you collect your Christmas ham.

I worked in Kmart and I’ll never forget the day a guy, who was already pretty agitated, came into pick up his lay-buy a few days before Christmas and it was missing. Despite my best efforts to resolve the situation, he fully lost it and barged his past the service desk, into the stock room where they keep all the lay-buys and started yelling at me, and all the staff out there. – Sof

I was a flight attendant for a while, and during Christmas on a flight someone shat in the sink in the lavatory. – Annie

I worked at Dymocks, and a lady came in on Xmas Eve looking for a book she need for a gift the next day. We didn’t carry it and told her it would need to be specially ordered in from the States. She lost her shit at me for not having it in stock, abused me for ruining her Christmas and stormed out of the store, knocking stock off shelves on the way out. – Amy

When I worked at Brumby’s, we always had people leave it until midnight on Xmas Eve to buy bread for the next day, then decide it’s YOUR problem that everything is sold out. – Kassia

I used to work at this place that sold expensive, high end statues, and during the Christmas panic I somehow pulled out one of the full cabinet shelves, smashing $5,000 worth of stock. – Leah

I worked in a craft store during the time ‘feather’ yarn was popular for scarves and stuff. The sweetest little purple-rinse ladies turning into Angry Bilbys when we didn’t have the same dye lot as the rest of the scarf/jumper/whatever they’d already knitted and they only needed one more ball and can’t you just call the manufacturer to get one more ball because this is a Christmas gift for my nephew?! – Erin

When I was a blackjack dealer, a rich asian man decided to sit at my table on Christmas Eve, he continued to give me dirty looks as he lost money, didn’t say a word to me. And then as he was leaving, he decided to hock a massive spit into his coffee cup, handed it to me & said Merry Christmas. – Mollie

I was working in a big shopping centre with Christmas crowds when the trolley boy thought it’d be a great idea to bring a super long train of empty trolleys down the escalator. He lost control, they came speeding right towards us, people had to dive out of the way and they smashed right into the glass front windows. – Kassia

At Dan Murphys one year a couple bought around $2k worth of grog, and paid for it in increments of $50 gift cards, when there’s about a million people on the line. While this is happening, a mum with a pram is stealing alcohol by hiding it in the pram. Good times. – Adrian

I worked at a concession store in a department store, and some lovely lady took a shit in the change rooms and covered it in clothes. Staff went into meltdown, it was chaos. – Amy

I worked at Lowes (don’t make the joke or I will have a fucking meltdown) and one shift close to Christmas this dude walks in, picks up a hat, literally rips off the security tag, puts it on his head and walks out of the shop with a big fat hole in the back of it. Right in front of me and the manager, who flips out and chases him out of the store. Old mate with the hat is calmly walking through the centre while my manager is yelling like a crazy person. It was intense. – Matt

I worked Boxing Day at Hoyts when I was in high school, and my shift concluded with us finding what we assumed to be a dead guy in one of the cinemas, turns out he was just reeeeeaaal high on heroin. – Jack

I worked in a department store, and the area I worked has a large ‘lad’ population so naturally Nautica clothing is high on the list to shoplift. It got so bad we had to increase the security tags on them (see example below). One kid really really wanted one, but I guess he hadn’t been nice that year so he decided to grab one and run. Apparently security guards aren’t meant to tackle people they suspect, they can’t even touch them. But our guy tackled this kid as he ran out in the centre from menswear. It was such an interesting day! – Georgia 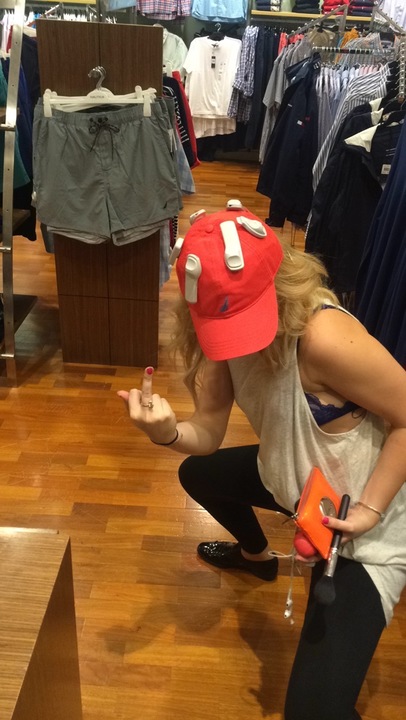 Boxing Day at City Beach: Infant takes a wee in a line of around 100 people. Mother says “sorry about that” and walks out. – Chantelle

Working at the Genius bar in the Apple store just after Xmas – you get to see lots of inconsolable kids and depressed parents trying to repair brand new presents which are smashed. Worst time. – James