Rebecca More – gay icon, adult film star, educator and one half of beloved duo the Cock Destroyers – has been blocked by Richard Branson on Twitter, because apparently the Virgin Group founder hates to see a powerful girlboss winning.

Overnight, More posted a screengrab on her Instagram – because half the joy of getting blocked is posting about it later – along with the caption “No flights to spunk island then”, and of course, fans were intrigued, and needed further goss immediately.

More later clarified that it happened when she asked a spicy question to Wolf Of Wall Street guy Jordan Belfort, explaining:

“[Having] asked Jordan [Belfort] how big his member was after he asked “ask me anything” someone suggested he flew me to spunk island on his jet, I said that was Ricky Ransom’s job and @ richardbranson”

So there you have it. Rebecca More made a simple and entirely reasonable request to be flown to Spunk Island – Richard Branson owns several islands, so that might well be one of them – and got blocked for her trouble. Brandon’s loss, TBQH. 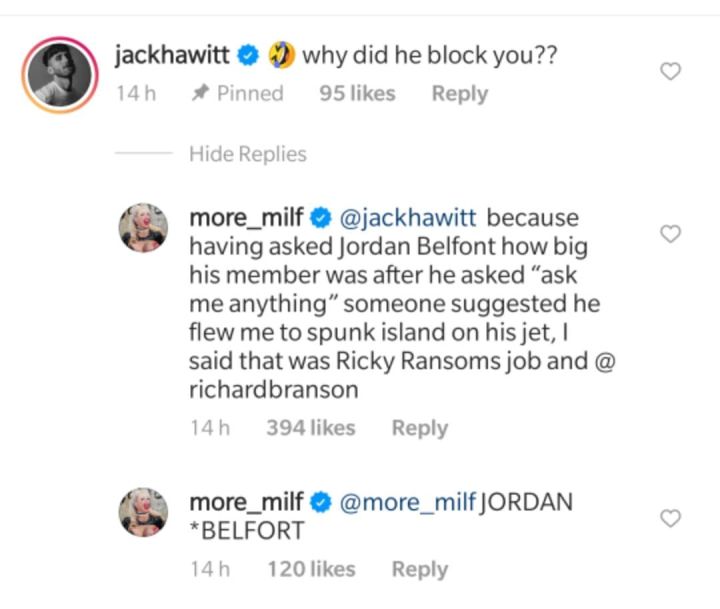 Rebecca More and Sophie Anderson shot to viral fame several years ago, off the back of an extremely chaotic viral video that set the stage for them to be known as the Cock Destroyers.

You can see it embedded here in this profile, although be warned that it’s fairly wildly NSFW, as expected.