Ex-Love Island contestant and Sydney influencer Phoebe Thompson has come under fire for trying to raise donations for the victims of the Queensland floods via her OnlyFans. Honestly, it’s pretty fkn genius, and the hate she has received feels way too much like slut-shaming.

Thompson shared an Instagram story to her 52k+ followers on Tuesday, alerting her fans that she would be handing over a huge donation towards the Queensland and northern NSW flood disaster relief.

All folks had to do was subscribe to her OnlyFans, which is, you know, how she gets her fkn money to begin with.

However, some people just couldn’t handle the hustle.

Thompson received a bevy of hateful comments in her DMs, sharing one to her story that was especially nasty.

“Just donate the money if you friking have it,” wrote one white woman.

“So, in other words, you want to help but u also want to [be] taken note of and make money through it too.” 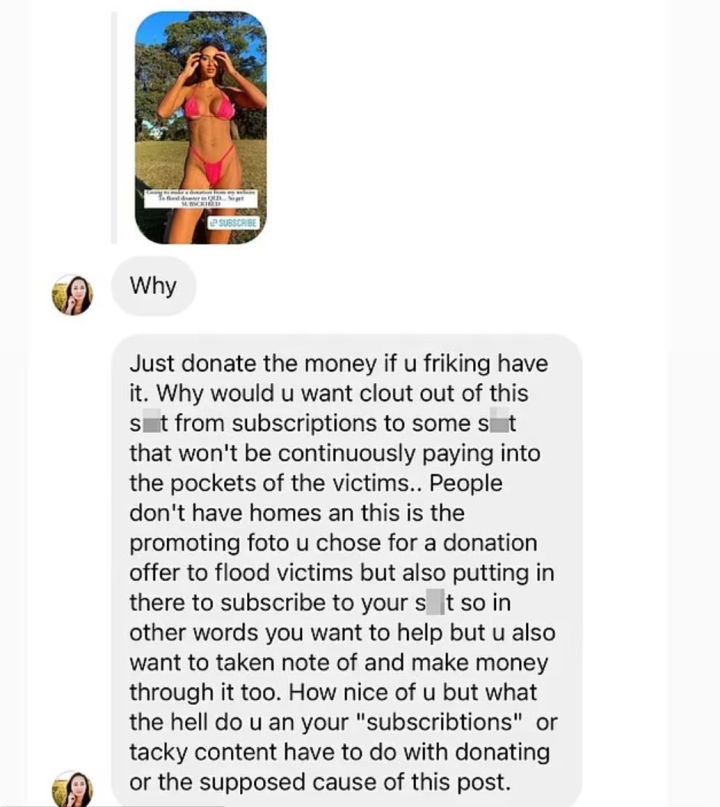 To this, Thompson replied:

“This is my fucking job! This is how I pay my rent and feed myself! If I don’t have a job, I can’t make money!”

“Is this about slut shaming? If I owned a cafe and said I will be giving $1 from the coffees to help would that not be acceptable?

“Or would you rather me donate nothing? Because regardless of whether my subscribers go up I will be donating but the more people that support my website the larger amount I can give away… sort your internalised misogyny out!!”

Drag her through the mud!! We love to fkn see it. 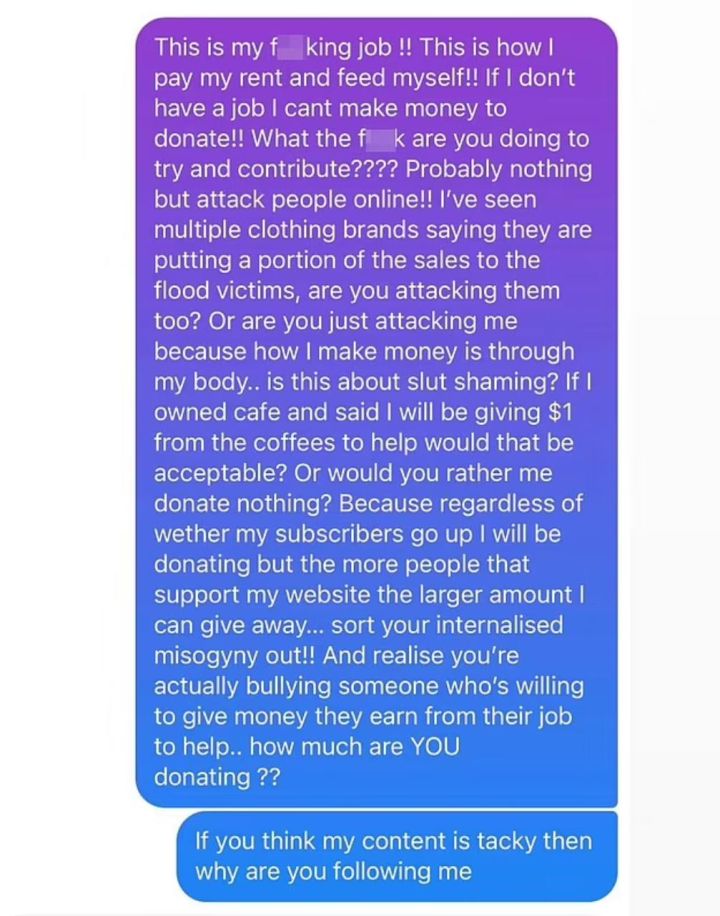 Despite the clapback, Thompson then went on to post a teary video to her Instagram, which has since been deleted, in which she spoke about how all the backlash has affected her.

“I am literally just trying to do the right thing.

“I’ve got friends and family that are in Queensland who are suffering from these floods. I just escaped from up north, that could’ve been me stuck in one of those situations.”

“You can’t bloody win,” she continued.

“I just think like, if someone’s trying to do something nice then why be mean to them?”

And she has a fkn point.

What’s the difference now? Phoebe Thompson is trying to raise money via her business so she can donate it to a positive cause. This is her using her platform for good.

Let’s leave the misogyny and slut-shaming at the door. Any amount of money donated towards these devastating floods should be welcomed.