Kim Kardashian officially made her way Down Under to be with Pete Davidson while he’s in town shooting a new film. Some keen beans quickly tried to find where the Hollywood it couple stayed in Cairns for a few days but apparently, they’ve done what every tourist does in Far North Queensland and gone bush — literally.

The Kardashians star, Skims owner and internet-breaker recently touched down in Cairns for a weekend getaway before jetting off home again.

One TikToker claimed Kim was momentarily staying in the hotel next to her and a friend so they employed the best way to draw a celeb out onto their balcony: yelling outside the hotel like Kath Day-Knight.

Others had ideas of things Kim and Pete could have gotten up to while in the FNQ holiday spot/sugarcane city.

Kim Kardashian is in Cairns. Didn't even offer to help my mum and dad clean out the lawn locker today. Rude.

But folks reckon there’s something low-key suss about Kim’s visit.

Someone sent a message in to goss guru Deuxmoi that read: “A certain reality TV star and business mogul recently took a weekend trip to Australia to be with her man. Took very severe steps to make sure she wasn’t seen. Multiple businesses then made fake social media posts claiming to have served them for clout which was all debunked. What on earth did they do all weekend?” 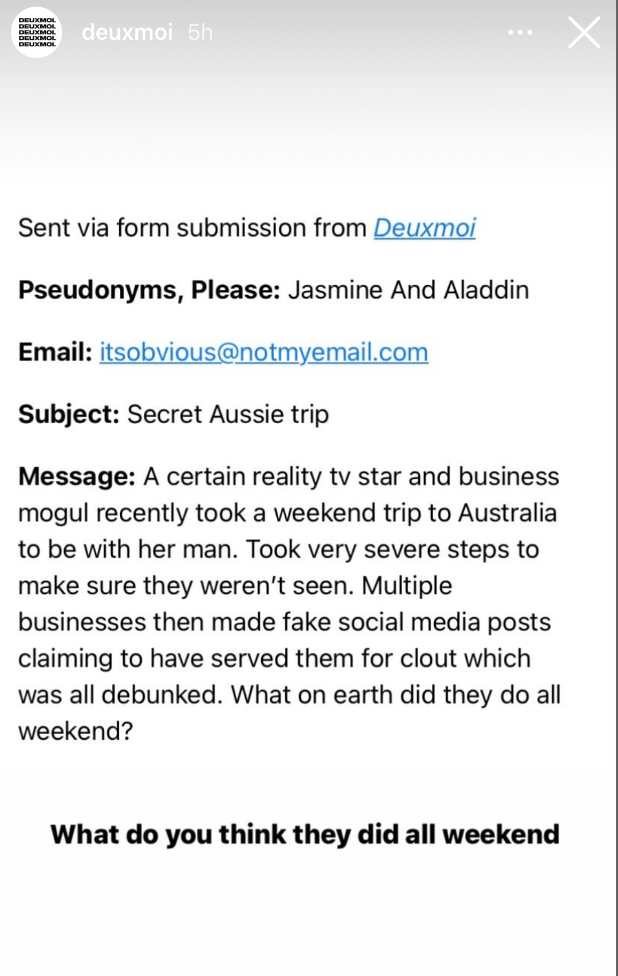 Deuxmoi added: “What do you think they did all weekend?” Hm…

Kim and Pete were likely not in that hotel for long (if that’s where they really were) but The Daily Mail reported that they yeeted off to where everyone goes when they’re in Cairns: the Daintree.

Apparently they were deep in the country’s tropical moist patch at a eco-lodge near Mossman, which is a luxe spot that’s just had a $22 million reno and is sheltered by the rainforest’s lush canopy.

A night’s stay at one of Silky Oaks’ various lodges will set you back anywhere between $690 and $5000 a night, with the most expensive room being the Daintree Pavilion. Honestly, it looks bonkers gorgeous but a little out of my tax time treat allowance.

I’ll let you guess which option Kim and Pete are rumoured to have shacked up in for the weekend.

All we’ve spied from her so far is an Instagram Story, showing off a new set of grills that look like they’re opals framed with diamonds.

READ MORE
Kim Kardashian Confirmed She And Pete Do Not Have A Foot Fetish & Okay, Thank You For Notifying Us

Time to keep our eyes peeled for the inevitable holiday spam from serial poster Kim Kardashian and her offline boyfriend Pete Davidson — the ultimate combination.

Unless… she was never here to begin with? Ah, I’m so confused.