Pauline Curuenavuli (better known as Aussie singer and songwriter Paulini) has shared an odd piece of lockdown disinformation, originally written up by an ex-Survivor alum, to her Instagram story.

The post, shared to Paulini’s Instagram story, was created by Odette Blacklock, who appeared on the 2017 season of Australian Survivor (season 2) and now works as a “body & mindset coach”.

Within the large wall of text, the post claims to have found a surefire way to “defeat the passports” (presumably vaccine passports) and runs through eight steps involving courts and the Human Rights Commission.

You can have a look at the shared post below. In the spirit of not wanting to share any wild pieces of disinformation, every misguided step that the post encourages people to follow has been blacked out. 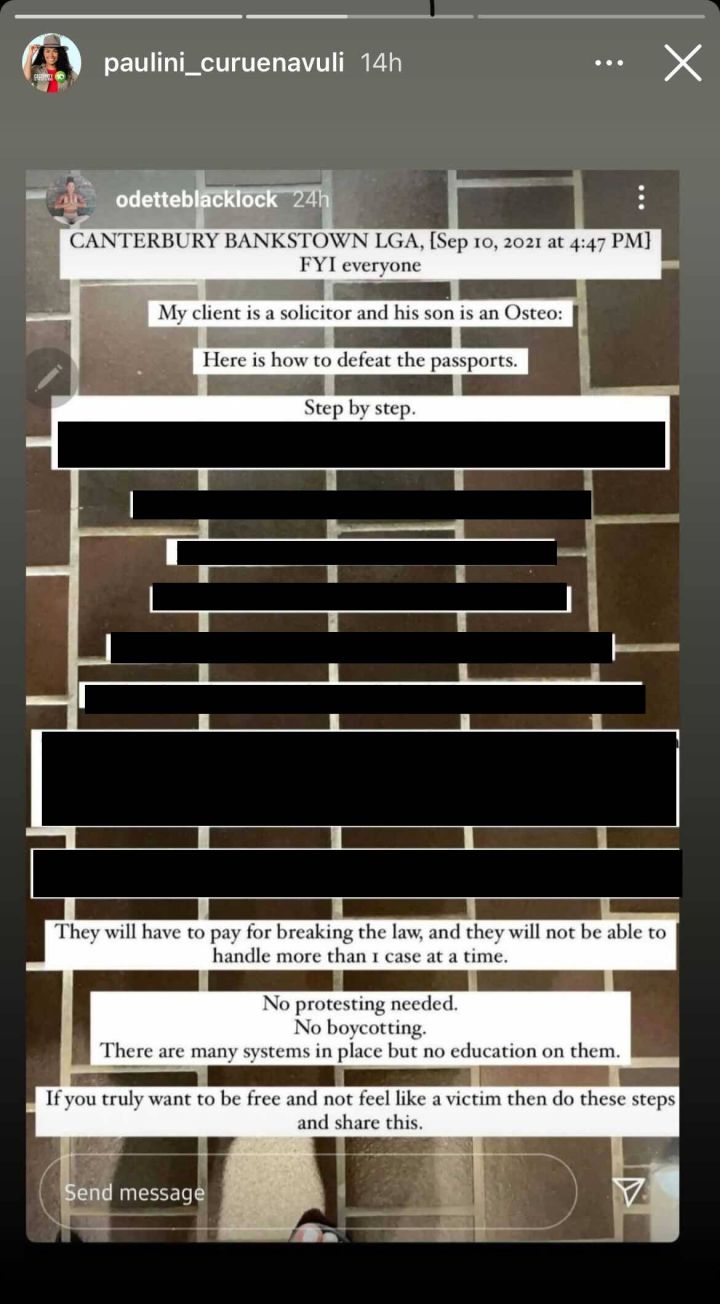 Basically, the post is endorsing a ‘legal’ way to circumvent the proposed vaccine passports, which will be introduced in October. The passports, announced by Scott Morrison in August, promise to offer those of us who have been double jabbed a way to access more freedoms.

Those of us who have a vaccine passport will be able to prove their eligibility to enter places such as restaurants, while those without may be refused entry. This is what Blacklock is fighting against.

“My client is a solicitor and his son is an Osteo: Here is how to defeat the passports,” reads Blacklock’s original post.

It is unclear how an Osteo would know how to do such a thing, but hey.

The post also encourages those in the Canterbury-Bankstown LGA to overwhelm the courts by following the written steps, saying that “they will not be able to handle more than 1 case at a time.”

“No protesting needed. No boycotting. There are many systems in place but no education on them,” the post continues.

“If you truly want to be free and not feel like a victim then do these steps and share this.”

Paulini was one of the individuals who shared the post to her Instagram story, although it was eventually taken down after a couple of hours.

At the time of writing, Paulini and Odette Blacklock have refused to comment on the matter.