‘Overwatch’ Petitioned To Rename Character Harambe (The Gorilla Who Died)

He was a beautiful, noble beast taken before his time, my friend and yours: Harambe. Whether you agree that he had to be shot or not, we can all agree on one thing – that he died doing what he loved: being a gorilla.

Harambe was shot by zookeepers at the Cincinnati Zoo after he manhandled (gorillahandled?) a child that fell into his enclosure.

What better way to memorialise an ape that was killed by possibly unnecessary gun violence than by putting him into an online FPS? 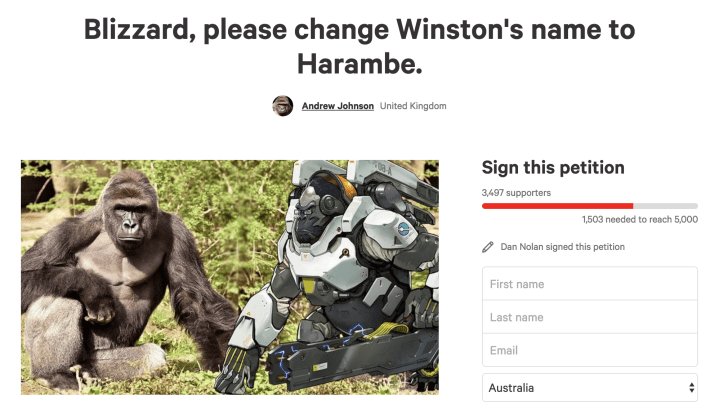 Some jabronis started a petition to have the genetically-engineered combat gorilla Winston from ‘Overwatch‘ rebranded in tribute to the majestic ape:

“On May 24 we have been blessed by the official release of Overwatch. Only 4 days later, many of us had the joy ripped right off from their heart by the tragic shooting of Harambe, the 17-year-old Western lowland gorilla from Cincinnati Zoo.

“We, the undersigned believe that in loving memory of Harambe, and to honor the life and death of this beautiful creature, Blizzard should change the name of the character Winston to Harambe. Or at least make a skin for Winston in the likeness of Harambe.”

So far it’s got about 3,500 signatures out of its target 5,000. Hopeful Blizzard recognises the will of the people and honours the memory of Harambe (the ape who died).