North West, the eldest daughter of Kim Kardashian and Kanye West, just turned nine and her mama treated her to a lavish birthday bash to celebrate.

How do we know this? Well, because footage from the weekend-long bday celebrations were splattered all over social media so naturally, Kim’s followers have been sussing out every lil detail with a fine-tooth comb. (The word ‘splattered’ will soon become very visceral to you, brace yourself…)

The event was camp themed (not camp as in Liza Minnelli, camp as in sleeping in the forest) with several photos bearing the slogan ‘Camp North.’ So it’s a camp dedicated to North West, not a camp located up north. You get the idea.

Sorry for all the qualifying, I just wanna make sure we’re on the same page because shit’s about to get real weird.

In one of the shots, North and a mate can be seen lying in tents adorned with the heads of deer toys along with blood splatters.

For a nine-year-old’s birthday party! 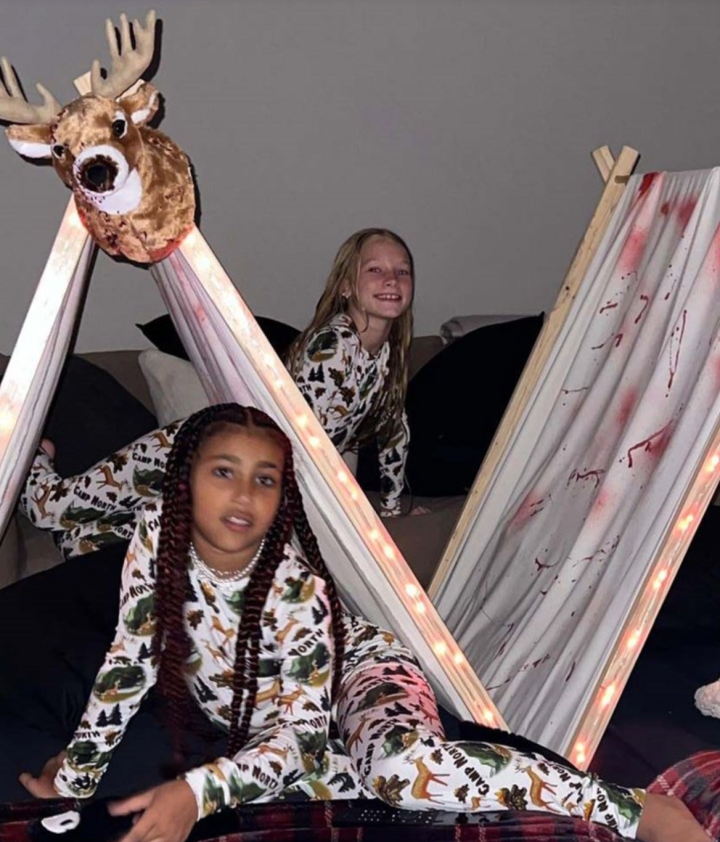 The sight of splattered blood, albeit fake, is absolutely fucking nauseating.

And it’s not as if the whole thing went over Kim’s head because she captioned one of the pics: “North’s creepy wilderness birthday, it’s so cool.”

No, Kim. Not cool. Fucked up… even by Kardashian standards.

Kim’s followers took to the comments section to point out how cooked the deer decorations were.

“The blood-splattered deer tents are something…” wrote another.

“Are those blood stained tents?” wrote a third follower, while another asked: “Miss Kim, why is there blood-looking stains on the tents?”

If you think you can stomach the sight of slaughtered faux deer and overt opulence, have a peek at the gallery shared by Kim Kardashian herself below:

If the faux murdered deer isn’t enough to make you vom, what about the fact that they’ve chartered a private jet for a ninth birthday party?

What a huge fucking hit to the environment when they could’ve either driven or thrown the party in their enormous backyard.