It is a widely-known fact that actor Nick Offerman‘s similarities to his character Ron Swanson are numerous.

They both love a good Scotch. They have the same, endearingly childlike laugh. They are both utterly helpless when it comes to Megan Mullally / Tammy 2 (though in *very* different outcomes), and they both know their way around a fine bit of wood.

So it’s only natural, of course, that Offerman would save wood from the Parks and Recreation set and make his ex-colleagues a canoe paddle with it, complete with a ‘City of Pawnee, Indiana‘ crest burnt onto it. Of course he would.

Parks and Rec co-creator Michael Shur shared the news / a pic of the thing of wonder yesterday:

Nick Offerman salvaged the wood from the Parks and Rec set and made us all canoe paddles with it. World champion. pic.twitter.com/pegpTXk25H

(FYI ‘Ken Tremendous‘ is a pseudonym Shur’s been using for yonks.)

While we don’t know exactly to whom Offerman gifted a paddle to, we can assume that it probably included the main players (Amy Poehler, Aziz Ansari, Aubrey Plaza etc) and that it almost definitely included Chris Pratt, for whom Offerman’s affection and love knows no bounds. 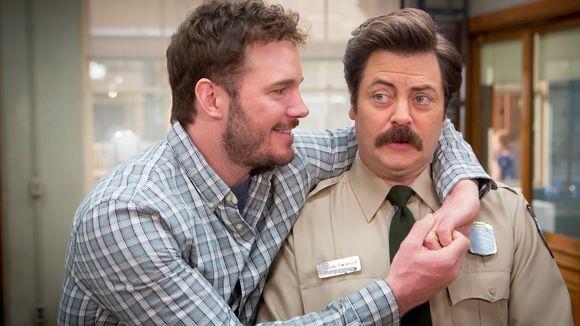 For example, check out Offerman’s answer in a particularly filthy round of ‘Would You Rather‘ we played with him last year:

PEDESTRIAN.TV: “Would you rather have a starring role in the next Star Wars movie, or Jurassic World movie?”

Nick: “Oh gosh. Geez… I guess the Jurassic World franchise, because that would reunite me with my beloved Chris Pratt.”

Offerman’s memoir ‘Paddle Your Own Canoe‘ is out in paperback now, so this whole thing could just be a bit of a publicitiy stunt from Shur to help a friend kick off a few sales, but anyone who’s ever read one of his many, many Reddit AMAs – something he’s a huge fan of, btw – it’ll be a cracking good read regardless.