New Zealand Goes All In On The Hobbit [My Precious]

New Zealand – short of renaming itself The Shire or printing Gollum’s face on legal tender – has gone all in on The Hobbit with the launch of an extensive Hobbit-themed tourism campaign backed by Air New Zealand, Peter Jackson and Tourism New Zealand.

“Our objective is to show people that while New Zealand stars as the fantasy world of Middle-Earth, what people see in the cinema is actually a real place just waiting to be explored,” said Chief Executive of Tourism New Zealand Kevin Bowler. “Not only that but you can have some amazing adventures and experiences within movie-like landscapes. The campaign’s primary aim is to compel people already interested in a New Zealand holiday, to make an actual booking.”

In other words, this is the perfect place to play out all your Legolas-related bondage fantasies. Just look at it!

Likewise, Air New Zealand has inked a two year deal with New Line Cinema and Metro-Goldwyn-Mayerwhich which will see international guests board Hobbit-branded Boeing 777’s while watching Hobbit themed in-flight safety videos . The video, a screenshot of which you can see below, will screen on Air New Zealand flights from November to coincide with the world premiere of The Hobbit: An Unexpected Journey in Wellington.

One film to promote them all! 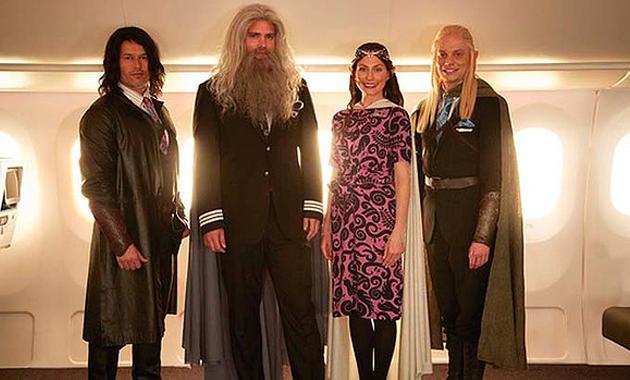