Remember When Nasser Told Fans To Send $ For Domestic Violence Orgs He Had No Affiliation With?

CONTENT WARNING: This article discusses domestic violence. If you need to talk to someone, please call 1800RESPECT on 1800 737 732. If you are in immediate danger, call the police on 000.

Part 2 of the Married At First Sight reunion is currently airing and as Nasser Sultan has become a viral topic of conversation for his strange antics on the show, we thought it necessary to remind you of some of his particularly awful behaviour a few months ago.

Back in November, Nasser Sultan was called out by his Instagram followers after sharing a video asking fans to send him money to be donated to several organisations.

“I’m not a professional about domestic violence, but I’m only here to take your money and contribute to the cause,” he says in the video.

“It’s a very good cause and I’ve had a lot of messages this week from domestic violence people, which I was heartbroken.”

SEND ME YOUR MONEY!

Domestic violence is not just physical it’s mental and emotional! If you know someone or experiencing this remember you’re not alone . There’s good people around you that are willing to help.

The comments section of the post soon became flooded with comments from people questioning whether or not Nasser Sultan is actually affiliated with any domestic violence organisations.

“Where is the money going? Would love to know what charity that funds will actually end up with,” asked one follower.

“White ribbon,” Nasser responded. Then when another follower tagged White Ribbon, the organisation’s official Instagram wrote: “Thank you for tagging us. If you would like to fundraise for our organisation, please email donations@whiteribbon.org.au for our organisation as we only accept donations from authorised supports. Thank you!” 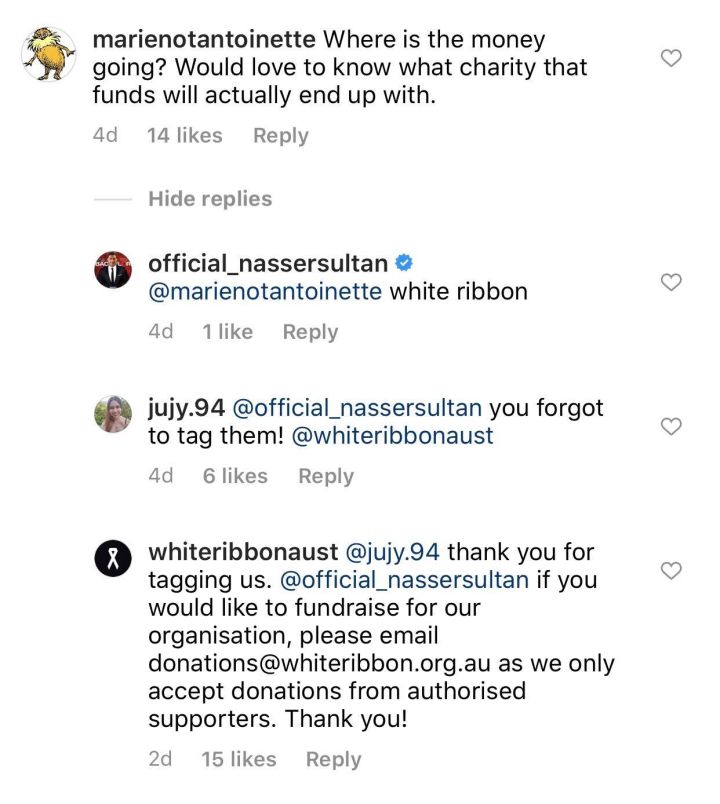 He then mentioned 1800RESPECT Australia, and when a follower tagged their Instagram, they wrote: “If a meeting had taken place with an authorised 1800RESPECT representative, we would have let you know that we do not accept donations or fundraising on behalf of third parties. Again, we recommend people contact services and donate directly.”

When a punter asked White Ribbon Australia about the matter on Twitter, they responded: “We can confirm Nasser Sultan is not raising money for us or @1800RESPECT.”

We can confirm Nasser Sultan is not raising money for us or @1800RESPECT https://t.co/mmVMljlH4L

PEDESTRIAN.TV reached out to Nasser at the time to understand his side of the story and he said he “never said I was affiliated with any organisations, all I said is that I’m looking at those two.”

“I’ve just joined Cameo and everyone’s charging $100, $200, $300, but I thought, ‘I’m gonna charge $5 for fun and I’m going to donate the money to charity. Then when people asked which charity, I just mentioned those two, because that’s what came to mind. I never made a deal with them or anything,” he said.

He claimed that he intended to receive donations from fans, then pass the money onto charity.

“I’ve had friends that have been in domestic violence. I’ve had neighbours. It’s not just physical, mental abuse, you know what I mean? I could have just gone to The Wayside Chapel and buy some clothes [with the money].” [Editor’s note: The Wayside Chapel is a charity-run op shop].

He went on to claim that he reached out to both 1800RESPECT and White Ribbon but did not receive a response.

He added, “I reached out to White Ribbon this morning and no one’s gotten back to me,” he said. “I rang 1800RESPECT last Friday and they go, ‘I can put you on to our media person.’ Then I called the media person and no one answered.”

We have spoken to both White Ribbon and 1800Respect and they deny having any prior contact with Nasser.

No fundraising event has been registered on our website seeking our legally-required approval and we had not been contacted by Mr Sultan regarding his efforts when he began telling people he was raising money for White Ribbon Australia and 1800 Respect. Indeed, 1800 Respect don’t take donations at all.

Anyone seeking to raise money for White Ribbon Australia should follow the appropriate processes to ensure accountability and compliance with fundraising legislation.

And 1800Respect’s spokesperson offered the following:

“1800RESPECT is fully funded by the Australian Government and delivered by Medibank Health Solutions. 1800RESPECT is not a charity and does not accept donations or fundraising.”

He went on to slam the “vigilantes” who were calling him out on Instagram for “trying to take money from domestic violence victims.”

White Ribbon Australia is part of a global social movement working to eliminate gendered violence. Check out their website for more.