A Loving Tribute To ‘Mystery Diners’, The Greatest Reality Show Ever Made

Contemplate this scenario: you are a restaurant owner, and you suspect that your kitchen staff are, through a labyrinthine system involving a number of players and intermediaries, defrauding your company of thousands of dollars. What do you do? Do you confront your employee, as a responsible manager might? Call the police? No. What you do is call television’s least charismatic host and invite him to set up an unfathomably stupid sting on your premises to catch them in the act.

This is the premise of the Food Network’s frankly legendary show Mystery Diners, which airs in Australia on SBS Food. The show, hosted by allegedly real mystery shopping entrepreneur Charles Stiles, is without any question the fakest reality show every created, and at no point is it even remotely believable. The production values are basically zero, the ‘restauranteurs’ and their ‘staff’ are acting school dropouts and the situations depicted are so unlikely as to be impossible. ‘Mystery Diners’ is so fake that it loops back around to being real again, leading us to question our own reality rather than the show. However you decide to suspend your disbelief (or not), it’s excellent TV.

As host, Stiles pitches himself as ronin figure, wandering the United States in pursuit of culinary justice. No case of a minimum-wage employee embezzling their bosses with implausible schemes is too small for Stiles. Accompanied by dubiously real employees and associates, as well as several thousand dollars worth of audiovisual equipment, he seeks to restore the yin-yang balance of the U.S. service economy. Charles Stiles is, I believe, not a real man in the sense we usually imagine them – he is a cipher, an ideal. In many ways we are all Charles Stiles, and none of us are. If Charles Stiles were to die, two of him would appear in his place.

He also looks like the Platonic ideal of a suburban dad.

Every single episode follows the same formula. A restaurant owner suspects that a flimflam of some description is taking place in their establishment, usually involving their kitchen staff, servers or some combination of the two. Rather than being normal about it, they bring Stiles and his team in. The Mystery Diners team set up a sting involving a number of cameras placed around the restaurant – which, as we are reminded by multiple characters in at least half of the episodes, is “not illegal” – and attempt to catch the ne’er-do-wells in the act.

Inevitably they do, and Stiles will bring the restauranteur in to view the captured footage, at which point they will look extremely shocked and say some variation of “HE WORKS FOR ME!” or “WHAT IS HE DOIN’???” and “DID HE JUST *SPIT* IN THAT FILET MIGNON?” While this happens, Stiles will shake his head, say things like “He clearly doesn’t respect you!” and just generally look disappointed in the downright criminal actions of a low-wage employee he has never met in his damn life.

It will then inevitably lead to the employee being dramatically fired, followed by a cut to ‘three months later’ where the restaurant is once again thriving and the thieving employee is missing and quite possibly dead. Justice is served.

(Also, in literally every episode the crook is somehow shocked when they see their boss appear and catch them in the act. They always say something like, “I thought you had the day off?” or, “I thought you were on vacation!”) 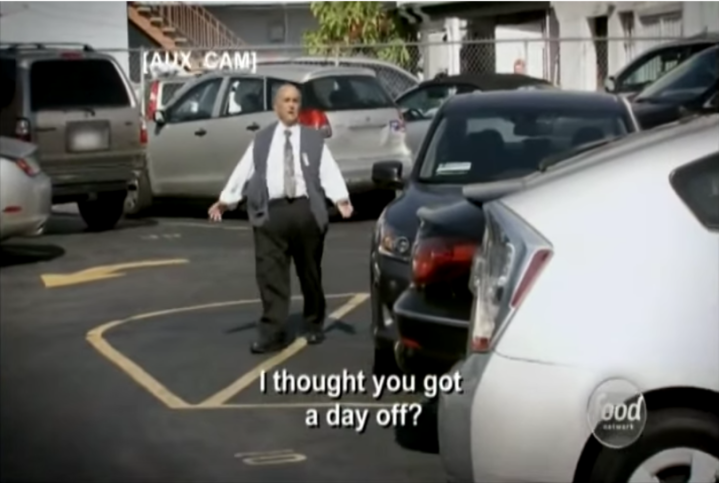 Though the form may remain almost unerringly consistent, the actual content wildly varies. In one episode, a Brazilian barbecue proprietor contends with his head server ordering way too much meat and then stealing the excess for BBQ parties of his own. In another, the employees of a BYOB pizza restaurant set up a van outside where they sell illegal booze to the patrons. In yet another, the pianist at an Italian restaurant accuses the resident magician of stealing her money using literal magic.

The show is absolutely perfect hungover viewing because of its plainly repetitious structure and fake nature – every episode bleeds into the next, and before you know it it’s 8pm on Sunday, your headache has magically vanished, and Charles Stiles is your dad now.

Somehow, this flimsy premise ran for eleven seasons until 2016 – that’s a full 141 episodes, all of which are basically exactly the same. At no point in the four year run did the producers make any attempt to modernise the concept or even the motion graphics: for example, every time the mystery diners use their extremely dubious ‘camera glasses’ to film a sting, absolutely fake text reading ‘[EYE_GLASS_CAM]’ appears in the corner of the screen to remind you of what it is you’re looking at. I believe this show cost at most twenty dollars per episode to make.

READ MORE
'Discovering Bigfoot' Is The Best Documentary On Netflix

Part of what makes Mystery Diners such compelling viewing is how unbelievably brazen it is in just how viciously it hates people who work in restaurants. All restaurant employees, according to the cop mindset of Charles Stiles, are potential criminals waiting for the perfect moment to steal from their magnanimous and kind boss, who has given them a job as an act of greatest charity. I firmly believe that if he could get away with it, Stiles would kill them on TV. It’s so insanely off-putting… and yet, somehow, perfect.

Bring back Mystery Diners. The people demand more food justice. Unleash Charles Stiles: he’s a loose cannon, but he gets the job done.

You can watch Mystery Diners on SBS Food, if you’re so inclined.