Today’s the day, folks! (Arguably) Hollywood’s biggest event of the year, The Oscars, is set to kick off in a matter of hours but the drama has already begun.

According to Us Weekly, exes Miley Cyrus and Liam Hemsworth both attended the WME pre-Oscars party in Los Angeles on Friday where they are said to have desperately avoided contact with one another.

When Cyrus rocked up with her parentals, Liam reportedly hauled-ass out of there, the publication reveals.

“They stayed away from each other,” a source told Us Weekly. “Liam left when Miley and her parents got there.”

The insider added that the Hunger Games star “didn’t seem upset” that Cyrus and her parents, Billy Ray and Tish Cyrus, were at the same event.

And the feeling appeared to be mutual with the Cyrus fam.

“Miley’s parents were staying separate from Liam and were hanging out in the back area of the party,” the insider shared. “They avoided him, but didn’t seem they had any beef with him. Miley also didn’t seem to be bothered by the fact that Liam was there because he left soon after she walked in.”

The source added, “Liam doesn’t have bad feelings toward Miley, he just wants to move forward with his life. He’s happy with Gabriella [Brooks].” 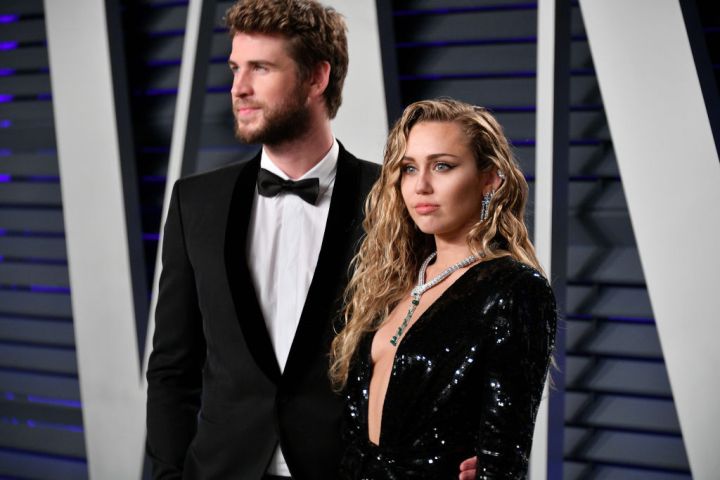 The pair reportedly have not communicated since finalising their divorce in January.

In documents obtained by gossip mongers TMZ, Cyrus and Hemsworth were officially declared single a few weeks back.

The finalisation comes about 13 months after they married in an intimate ceremony at Cyrus’ home in Franklin, Tennessee.

A mysterious source told PEOPLE that Cyrus was “relieved that she and Liam reached an agreement when it comes to the divorce.”

The sourced added, “She just wants to move on.”