While most of us are rejoicing over the like count being removed from Instagram, thus equalising all its users, influencers and social media personalities have been notably upset about the change, including Melbourne-based ‘grammer Mikaela Testa who posted a furious rant about the update.

She shared an article about Instagram’s latest manoeuvre and wrote, “If you think this is okay you can fuck off, it’s actually a sad day for those who have Instagram as a job.”

“Regardless of what you may think Instagram is a REAL job and those in the industry have worked hard to get where they’re at. It’s people that aren’t even in the industry that think it’s a fucking joke. It’s not, it’s real damage out here.” 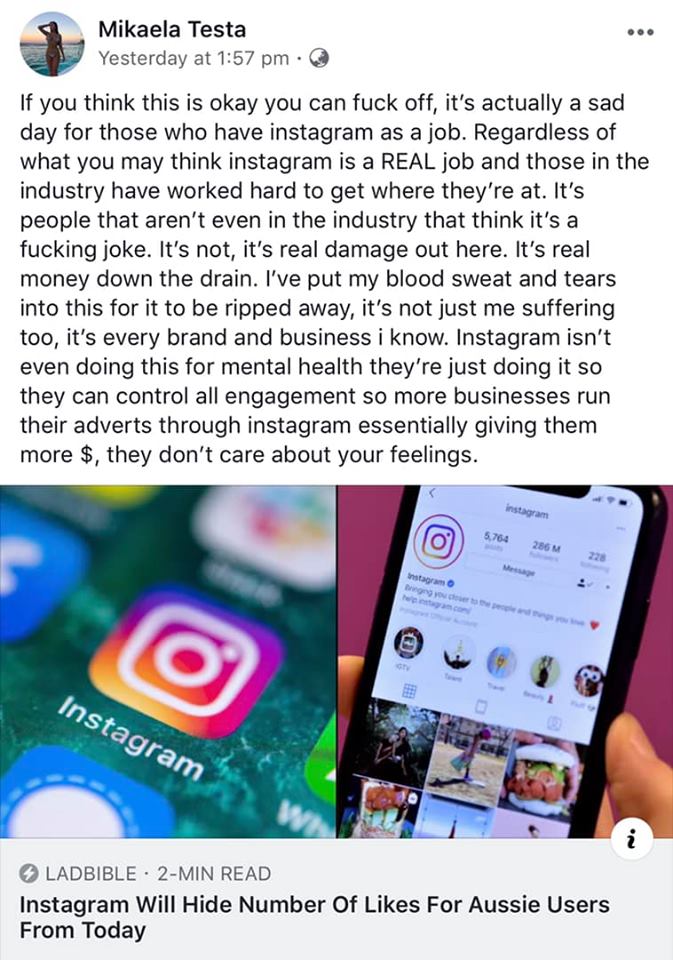 She added: “I’ve put my blood, sweat and tears into this for it to be ripped away, it’s not just me suffering too, it’s every brand and business I know.

“Instagram isn’t even doing this for mental health they’re just doing it so they can control all engagement so more businesses run their adverts through Instagram essentially giving them more $, they don’t care about your feelings.”

After copping mixed responses from her followers, she later shared a teary video that has since gone viral.

In the vid, Testa vowed that she would “have a really big break from social media for a while because it is really just … I know mentally Instagram for me is a problem and I can’t even accept that so I am just going to leave for maybe a couple of weeks so I can get back on track.”

Check out the video here.

Just one day later, she announced her return to the app, saying “OK break is over”.

“I have the ugliest crying face, say what you want this is raw content, that’s what this account is for, leaving social media for the first time ever,” she said.

She denied crying over Instagram removing likes and said that she was upset by the reaction from her followers.

“Since there are a few rude people misinterpreting this video, this has nothing to do with Insta removing likes that is the dumbest thing I’ve heard, this has everything to do with the disgusting hurtful comments and messages I’ve received over the past week and I just need a break.”