Looks like there’s trouble in paradise as Bachie pair Megan Marx and Jake Ellis have called it quits for the third bloody time.

Marx confirmed the tear-jerking news via Instagram after a fan left a comment probing her about the status of her relationship with Ellis.

“Have you and Jake broken up?” The fan asked, to which she succinctly responded, “Yes”. 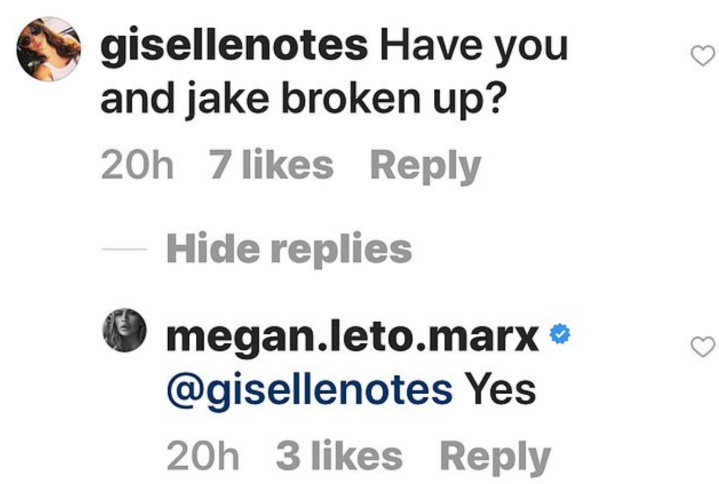 Megan first became something of a household name back in 2016 when she appeared on The Bachelor and started dating Jake (for the first time) when they met on Bachelor In Paradise.

They split up not long after filming ended as Megan had plans to travel overseas for work, Daily Mail Australia reports, but had reunited by the time BIP had gone to air.

They pulled the plug on their relationship once again in August 2018, with Megan saying that she’ll “always treasure” the memz they made on the show while Jake admitted that he hoped they’d one day “rekindle [their] special love and come back together”.

Sure enough the pair got back together in November and blessed us with more couple-y snaps on Insta.

Marx even described the bloke as her “best friend” in the caption of one of the pics.

“[He] never stopped fighting for Megan, he never gave up. He was certain she was ‘The One’,” Elora Murger said at the time.

“He got his life back in order, she found herself again and he came back for her and took her on a beautiful first date and seduced her all over again.”

But it looks like the pair are donezo once again… for now, at least.