PREVIOUSLY ON MASTERCHEF AUSTRALIA: A blatant flaunting of the “no political lyrics” rule combined with a vicious anti-Antipodean conspiracy managed to keep both Russia and Australia from taking out Europe‘s top music crown, with the 2016 Eurovision crown instead being handed to a limp Ukraine effort that had more flats than a housing commission tower. Also Justin Timberlake performed, just to remind the entire continent of Europe that the USA could show up in this badboy and utterly dominate it any time they feel like it.

I assume over on Channel Ten there was also some cooking or something going down. Eurovision’s important, ok?

With Marco Pierre White sadly vanished from our screens once again we enter one of those weird holding pattern weeks where nothing huge happens and we’re all just filling air time until the next ~extra special week~ where Heston Blumenthal rocks up to make everyone cook chicken balloons on the bloody moon or someshit like that.

Tonight, it’s Chloe, Karmen, and Olivia who face the chop from a bloodythirsty triumvirate of judges out to take the head of a peasant to warn the rest of the village against committing insolence.

And just when it seems like being a regular, run-of-the-mill Pressure Test with no huge surprises, the doors fling open and in walks REYNOLD.

LOOK AT HIM! LOOK AT HIS SWEET LITTLE FACE!

The return of the prodigal dessert son sends everyone into an absolute fit. Even Jimmy cannot manage to keep his trademark cool in check.

I swear, when this series is over I’m going to combine all these Jimmy GIFs into one clip and it is gonna blow some minds.

Reynold, now smashing it at his KOI Dessert Bar in Sydney, brings out a dish that would make the fabled Snow Egg dash out and buy a Hummer just to try and hide its newfound inadequacies. 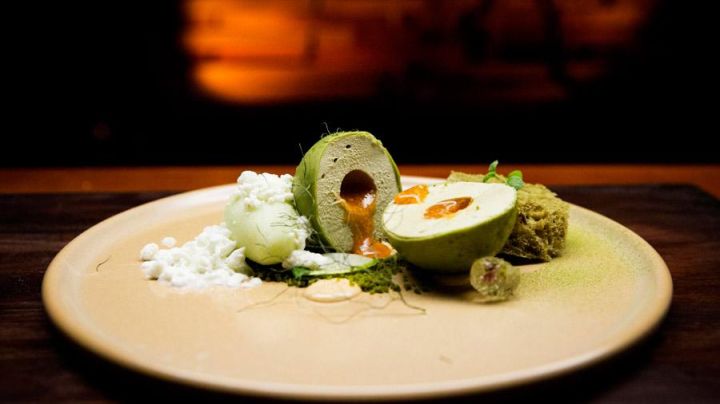 Good god, man. You’re trying to challenge the contestants, not break their spirits permanently. Ease the hell up.

The dish, entitled simply ‘Moss‘ (one word, like Seal) has twelve different stages. Casual reminder at this point that hell only has nine.

There’s caramel and pistachio stuff everywhere and a clear gel and a sorbet and knowing Reynold he’s probably found a way to hide an entire deconstructed Vienetta in there somewhere just to a complete bastard about it.

But then again HOW COULD YOU EVER STAY MAD AT THIS FACE?

HE IS ADORABLE, GOD DAMN IT.

With two-and-a-half hours to complete this mammoth task, the three in black are confronted with a recipe the size of War & Peace to wade through. Can you believe it? Reynold wrote a recipe! An actual recipe! That he sticks to! I wouldn’t be surprised in the slightest if 75% of the method instructions just read “do it by feel.”

Karmen‘s the first to stumble, attempting to whip together a pistachio mousse mixture that clumps together like a poorly-thought out Eddie Murphy movie reference.

But surprisingly, all three work their way through the initial stages of the cook with remarkable swiftness and ease.

In the moment of the night, Reynold decides it’s the perfect opportunity to jack George‘s lines by shouting “BOOM, SHAKE THE ROOM.”

Not impressed at all, Youngblood.

The delicate matcha coating is whizzed through without fault, and Olivia notes that it needs to be “placed over a bain marie,” presumably next to a chewy potato cake, a dim sim, and a pair of stale Chico Rolls that have been sitting there for the better part of 6 hours.

But then George, the shit-stirring genius that he is, throws a giant spanner in the works by looking Olivia dead in the eye and stating that she’s “a little bit ahead” of the other two.

I’ve seen the mozz put on things before; more than a few times, in fact. But that’s bordering on cruel and unusual. Olivia might as well have packed up on the spot and sodded off to beat the traffic, such is the enormity of the mozzing she just copped.

SAY IT WITH ME GEORGE.

ON YOUR BOYZ OR GIRLZ.

The sponge cake portion of the challenge proves a turning point for a number of reasons. Firstly, because everyone pulls out the cream chargers and gets absolutely stuck in to the nangs. And secondly because Olivia’s fails to shake the bottle, and winds up with a sponge so dense it could’ve been used to clean her bench afterwards.

And this is where things start falling apart for her.

The yoghurt foam doesn’t have any gelatine in it, meaning it more or less melts the second she removes it from the liquid nitrogen. The cake is as dense as a bottom level maths class. And to make matters worse, she put her balls in the freezer.

We’ve all made that mistake before, sure. It’s just that your average bloke learns that particular lesson at age 15 after three cans of Hahn Ice and half a lemon ruski. Not, y’know, on national TV with a countdown timer.

…boom. There it goes.

Poor Jimmy up on the gantry could barely handle it.

Chloe, for what it’s worth, just about 100% nailed the dish, although the judges remark that it was her “attitude” that impressed them the most, leading me to believe they got stuck into the nangs way harder than I first thought.

Chloe’s dish is praised by George for its “mouth feel,” which is a subtle nod to the fact that he obviously reads Boyle‘s weekly pizza email blast.

But ultimately it’s Olivia‘s gaps in technique that bring her undone, making her the fourth person eliminated from MasterChef 2016. So it goes.

NEXT TIME: Gary sucks down one nang too many and spends the entire episode giggling quietly to himself as Nam-like visions of desserts past flicker through his mind’s eye.