PREVIOUSLY ON MASTERCHEF AUSTRALIA: Sashi Cheliah won the 2018 title in an absolute canter after discovering the show’s version of the Konami Code is “cover everything in turmeric.” That’s not a joke either, he was pretty open about his strategy last night.

Translation: Roll your ass in turmeric and present it plump on a plate and the judges will think they’re eating cheese from the dick of God himself.

The code’s been cracked, folks. It’s a different game now.

The Only Good Cooking Show™ is back for 2019, mates! Who wins this year! Will anyone cook anything believably terrible enough to inject any sense of drama into things? Is anyone still watching this accursed programme or have we all switched over to the LEGO show?

After covering MasterChef in endless depth for god knows how many years now, I can now say safely say that – in my expert opinion – the series needs to shave the first twelve or so episodes off the series. Utterly pointless bullshit.

The opening ten minutes or so of last night’s premiere is filled with people reacting to the judges in the MasterChef HQ car park, and the ultra-dynamic range of facial expressions covers a spread that runs from “It’s 1964 and The Beatles just landed“:

It’s some rank store-brand Gogglebox-ass bullshit and I do not have time for it. Drop the season in at episode eight. Do away with all this water-treading nonsense. Premiere the season on the first elimination challenge. Have the judges point-blank tell everyone “this is the top 24, here they are” then point at three in black and mention “this lot fucked it up yesterday” and then have ’em start cooking. Easy. Build the emotional backstories from there.

In fact, the only highlight of the first 15 minutes of the show comes from this staggering missed opportunity where George served up an open form on a silver platter:

That no one shouted “FOR YOU TO PAY YOUR WORKERS AWARD RATES” there is an absurd whiffing. Get it together, comrades.

The reason these first few episodes have become utterly pointless in recent years is because nothing really happens and everyone is TOO FUCKING GOOD AT COOKING STRAIGHT AWAY.

MasterChef functions best when it’s more of an 80s movie training montage. Not a single soul wants to see someone already shithot at something get marginally better at it over the course of 10 weeks. They want to see some inept ten-thumbed muppet become a culinary king while Bon Jovi wails in the background.

Look at this shit. What is this. What is it. 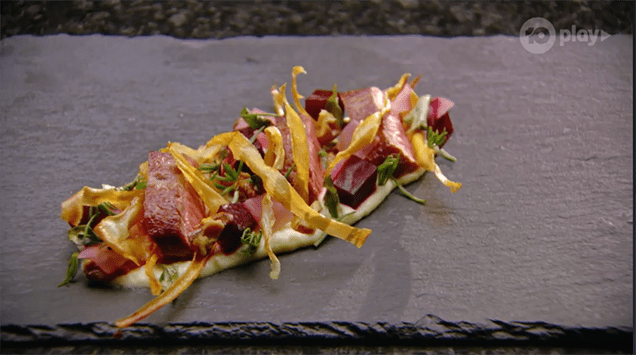 What the fuck, man? What is that? 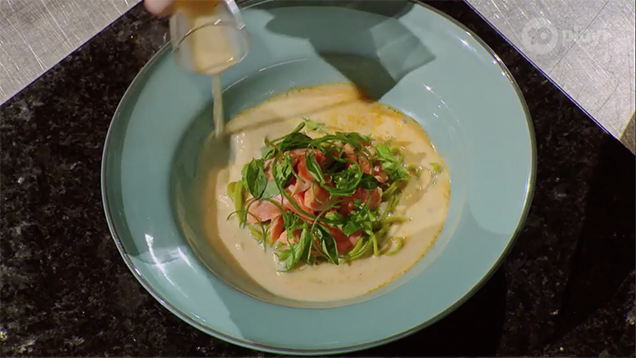 What the blue hell are you doing? 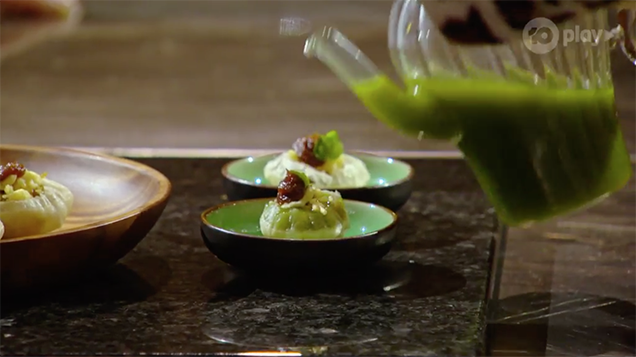 What the SHIT is all this about??

Those are EPISODE ONE DISHES. That’s absurd. What are these people doing funnelling themselves through an ungodly television pressure cooker where the end result is one of them gets a few handfuls of CBS spare change and a shackling contract to write a column in a print magazine no one reads?

What are you people doing here? Why are you doing this to yourselves? Go start a bloody YouTube channel and make squillions in ad dollars already. This show isn’t supposed to be for you. It’s supposed to be like the bloke who dished up this Bangers & Trash nonsense. 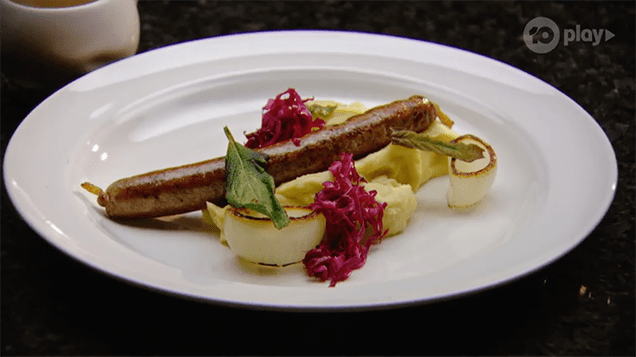 Possibly the single-most intense man to ever step foot in a MasterChef kitchen:

This ex-hospo pescatarian brewer with a Coheed & Cambria tattoo who we will follow into the dark because Twenty Nine-Scene is alive and well:

And the absurd bollocking of Gina, a sweet, somewhat repressed yia-yia and a walking angel of a woman: 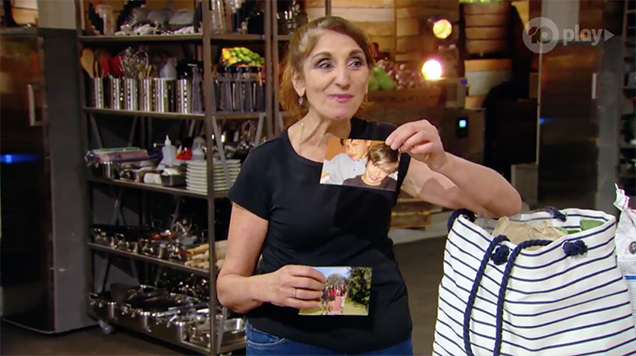 They give Gina the full backstory of being a long-suffering housewife under the thumb of a, let’s say, “traditional” husband who refused to let her be a chef twelve years ago and couldn’t even bring himself to come to the audition round to support her…

…and after all that they give her the straight-up coldest Three No’s of all time? Not even a second chance cook? They build it up like this is her one big chance to express herself and break free of the shackles of a suffocating old-world marriage and then they just give her the ole’ “better luck next year“? Bloody hell.

I know I’ve been wailing about wanting the show to get brutal but fuck me, save some for later you psychos.

Honestly, the most significant thing to happen on MasterChef last night didn’t actually happen during the show itself.

It happened about 5 minutes before it went to air, when George Calombaris rocked up to his interview on The Project looking like this:

Is he… is this prick for real?? 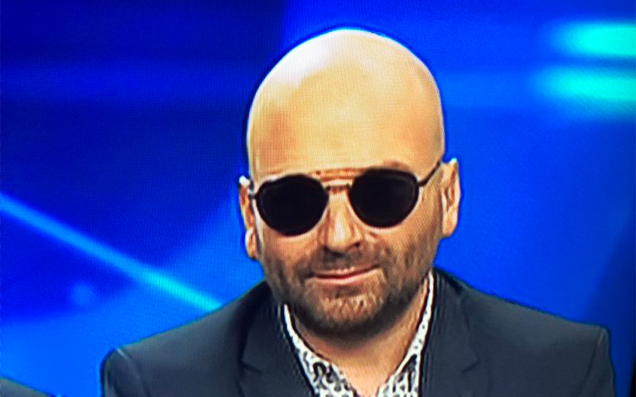 Excuse me, sir? Old mate seriously went on live national TV looking like he’s about to jam a USB cord up his ass and download black belt karate into his brain.

Here’s where the mystery deepens: Calombaris wrote the glasses off as a necessity due to a “squash ball incident,” but then here is mere moments after The Project went off air sporting what appears to be an injury-free face.

NOW: @oliverpeterson chats to @masterchefau judges Gary Mehigan & George Calombaris ahead of the launch tonight at 7:30pm on channel 10. pic.twitter.com/mf969ynC0g

I know it’s premiere day and all mate but maybe ease up on the verjuice until after you’ve clocked off.

NEXT TIME: We finalise the 2019 top 24 with a to-the-death battle for the final six aprons. The carcasses of those who fall will be recycled for use in future mystery boxes. Gotta minimise that waste!